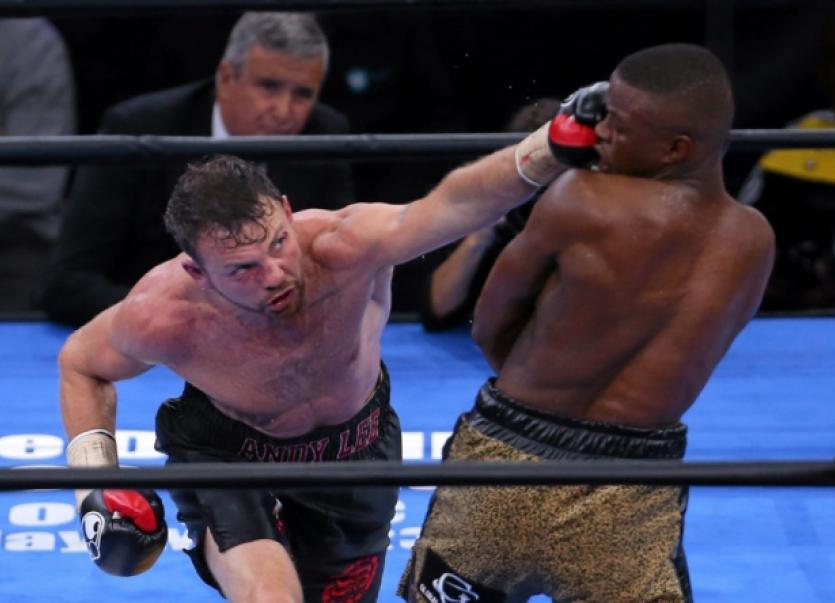 ANDY Lee battled back from two knockdowns to secure a draw in his middleweight contest with Peter Quillin in the early hours of Sunday morning in the Barclays Center in Brooklyn, New York.

ANDY Lee battled back from two knockdowns to secure a draw in his middleweight contest with Peter Quillin in the early hours of Sunday morning in the Barclays Center in Brooklyn, New York.

For the first time in his 37 professional fights, Lee went the full 12 rounds of championship boxing.

“It was a hard contest to score. He had the knockdowns but I boxed consistently, especially down the stretch, said Andy Lee afterwards.

It was an enthralling contest, tentative at times but mixed with explosive punches from both. Stats have shown the Lee threw 299 punches, while Quillin had 267 with 113 connecting for Lee and 103 for Quillin.

The fight was to be Lee’s first title defence of his WBO title but in a dramatic weight-in on Friday morning in New York, Quillin failed to make the 116Ibs and therefore the belt was not fought for.

Even if it were, Lee would have continued as champion with the draw.

Quillin was the hot 2/5 favourite and showed why in the opening round when he had Lee on the canvas. With less than 30-seconds to the bell, Lee was caught with a right hook and sent down.

But the Limerick man was straight back to his feet and made it safely to the bell and his corner.

In an mostly tentative opening both struggled to find any opening and the highlight of the second round was a flurry of punches from both in the final 30-seconds. It left Lee with a cut over his left eye.

But Lee was to be down again in the third round. Lee had started the better but was again on the canvas when Quillin found another big right, albeit it appears he has standing on Lee’s foot and not for the first or last time in the contest.

Down twice in three rounds all did not look good for the champion.

But Lee showed all the qualities of a champion to pull this contest back from the brink.

With his left jab doing some fine work, Lee edged his way into the contest and won rounds six to nine.

Round seven saw Lee send Quillin tumbling when he connected with a right but again it was the left that led the way.

As Quillin tired, Lee continued to throw the vast majority of the punches into the 11th and 12th rounds.

There may not have been too many complaints if Quillin was declared the points winner, but it was nothing more than Lee deserved for a display of true grit and quality - the signs of a champion.