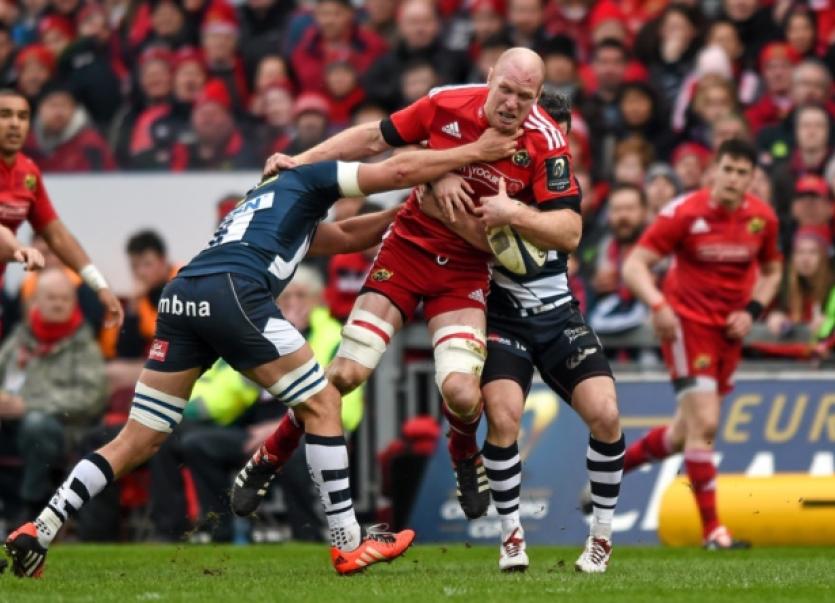 O’Donnell, who joins up with Joe Schmidt’s Ireland squad preparing for the RBS 6 Nations at Carton House this week, capped a fine individual display by grabbing Munster’s seventh try against the hapless Sharks.

O’Donnell said: “It’s good to see the ruthlessness there, once we saw blood in the water we went for it. Backs kept hitting tackles, it was incredible. It was good to be a forward in there as well.

“The faults of last week was we didn’t have the ball, and once we had the ball we kept giving it back to Saracens as well.

So, the focus this week was just on keeping hold of the ball. We’ve known all season how destructive we can be with ball in hand.

“We just have to restrict other teams having the ball, give us as much ball as we can and be as ruthless, as clincal as possible.

“It’s been strange (leading up to Sale game), we’ve been used to the last couple of years looking for the bonus point and going hunting for quarter-finals, home quarter-finals. It’s disappointing to be out so early; it was a bit of a lull.

“We owed it to the fans who travelled over last week, the fans who followed us all year to get back to winning ways.”

O’Donnell said it is crucial Munster earn a home semi-final in the Guinness PRO12 in order to boost their hopes of gaining a more favourable European Cup darw next season.

“Yeah, it’s (PRO12) a big thing now. To see how we finished last season and how it’s shaped this year with the group, it’s a big driver for me now that we can’t settle for third or fourth place.

“We need to win to push on for first or second place to get - there’s no easy draw - but the slightly favourable draw, and push on in Europe.

We’ve a team of good, hungry young fellahs here and we need to win silverware. That has to be a big driver for us.

“We know the bottom of where we are with Saracens and how much better we can be than that. We have to remember it and keep going, keep being better.”

O’Donnell will hope his fine showing will boost his hopes of starting for Ireland in the 6 Nations.