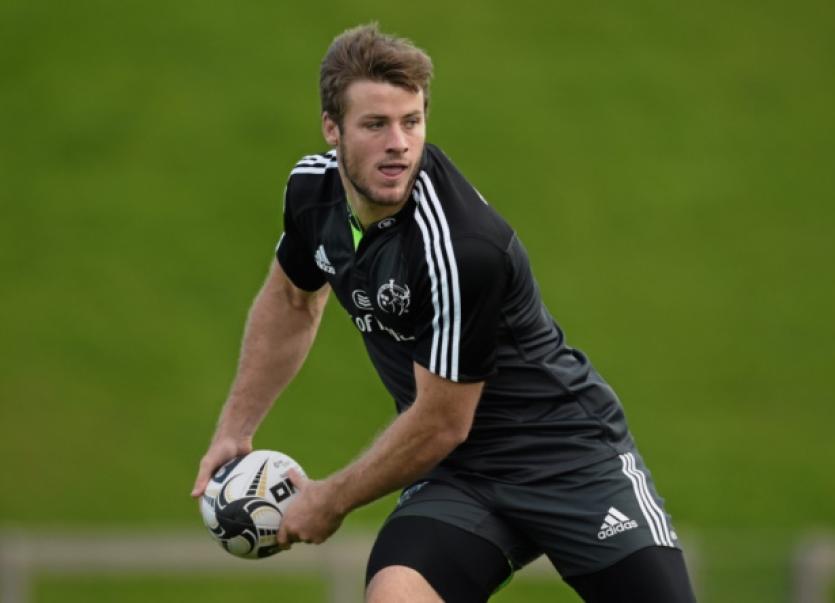 MUNSTER winger Keith Earls is set to be sidelined until the New Year as he recovers from knee surgery, the province has confirmed.

MUNSTER winger Keith Earls is set to be sidelined until the New Year as he recovers from knee surgery, the province has confirmed.

Limerick man Earls sustained an injury to his patellar tendon over the summer and underwent surgery on his injured right knee at the end of September. The 27-year-old is set to miss Munster’s crucial back-to-back European Champions Cup games with Clermont Auvergne next month and will be in a race against time to be fit for the province’s final two round of pool fixtures in January.

Munster trained at UL on Monday ahead of the resumption of the Guinness PRO12 this weekend with the province facing a clash with the Dragons at Rodney Parade on Friday night, 7.30pm. Munster’s new South African centre Pat Howard trained with his new team mates at UL for the first time this week. Howard joins the province on a three-month contract.

O’Connell is in the first season of a two-year deal he signed with the IRFU which is due to keep him at Munster until June 2016.

Brian Walsh said: “I don’t believe there is any truth in that (Paul O’Connell moving to France)

“He has another season left in his contract. My understanding is that there is no truth in the newspaper articles, but whatever Paul O’Connell wants to do, Paul will do and I don’t think Munster would ever stand in his way of doing anything.

“He has been an unbelievable servant, whether it will ever be replicated with himself, the likes of Donncha O’Callaghan, what they mean to the province, what the province means to them, you don’t know if you will see it again in the future. I certainly think whatever Paul wants to do Munster will back fully.”

Walsh said Canterbury out-half Tyler Bleyendaal, who had been due to join the province this autumn until he sustained a neck injury is rehabbing well after surgery.

Walsh said: “Tyler is rehabbing very well. It’s an injury that other players have come back from. Brian O’Driscoll got back within four months to play again and I think Rory Best had it as well, so that would give us some level of optimist. If you can come back scrummaging in the front row with that type of injury then there is a good chance that hopefully he’ll be okay. I think the expectation is that he’d rehab over there until December and that’s I think a telling point or a tipping point in terms of how the rehab is going. It will follow on from that then.”