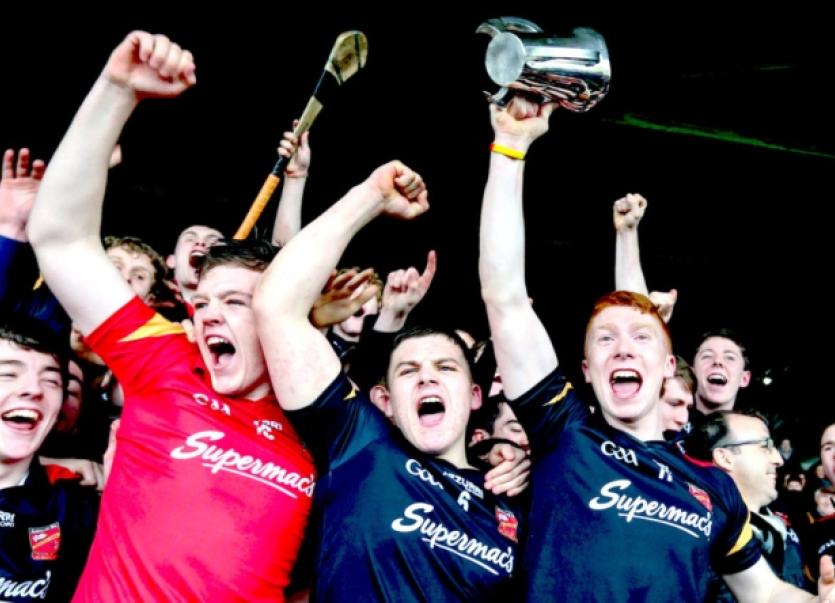 THE amalgamation of West Limerick Colleges will make a return to the Harty Cup and Corn Ui Mhuiri next October.

THE amalgamation of West Limerick Colleges will make a return to the Harty Cup and Corn Ui Mhuiri next October.

After amalgamation teams were blocked from entering the top level of Post Primary Schools GAA championship this season Limerick GAA led a campaign to reverse the decision.

A motion to this effect was successful and West Limerick Colleges will take their place in the senior A hurling and football championships next Autumn.

In the Dr Harty Cup, Limerick will have four representatives, while Charleville CBS will also have some Limerick club players involved, including current minor full back Paddy O’Loughlin of Kilmallock.

Champions Ardscoil Ris have been drawn in a most difficult group, that also includes West Limerick Colleges.

Completing the group will be Thurles CBS, Blackwater and St Flannans.

The opening round of games is due to commence on October 1, while the Limerick derby is pencilled in for round four on November 19.

Champions Ardscoil Ris will have a new-look side but will still be able to call upon current county minors Peter Casey, Aaron Gillane and Conor Fitzgerald.

Elsewhere Doon and Castletroy are once again grouped together, along with St Colmans Fermoy, Gaelcolaiste Mhuire and De La Salle.

This derby tie is scheduled to take place on November 19.

The top two teams in each group will advance to the Harty Cup quarter-final on January 14, 2015.

There are also four Limerick schools in the Senior B championship.

Salesian College Pallaskenry make the step-up after success in the ‘C’ grade this year. They are grouped with Hospital’s John The Baptist and Causeway Comprehensive.

Colaiste Iosaef Kilmallock are in with St Anne’s of Killaloe, while Hazelwood of Dromcollogher will play Cork sides CBC and Clonakilty.

Just the two teams in each group will advance to the knockout stages of the B championship.

Meanwhile in football, West Limerick Colleges will be the only Limerick representative in the top flight - Corn Ui Mhuiri.

The amalgamation of Rathkeale’s Colaiste Trocaire, Newcastle West’s SMI and Colaiste Ide agus Iosef of Abbeyfeale, will be in group three along with St Fachtnas of Skibereen, Rochestown and High School, Clonmel.

The Corn Ui Mhuiri will commence on October 22 next with West Limerick Colleges playing Clonmel in round one.

Abbeyfeale’s Colaiste Ide agus Iosef are to play in the Munster senior B football championship. In a straight knockout championship they await either Pobail Scoil Sliabh Luchra or Douglas CS on November 12.