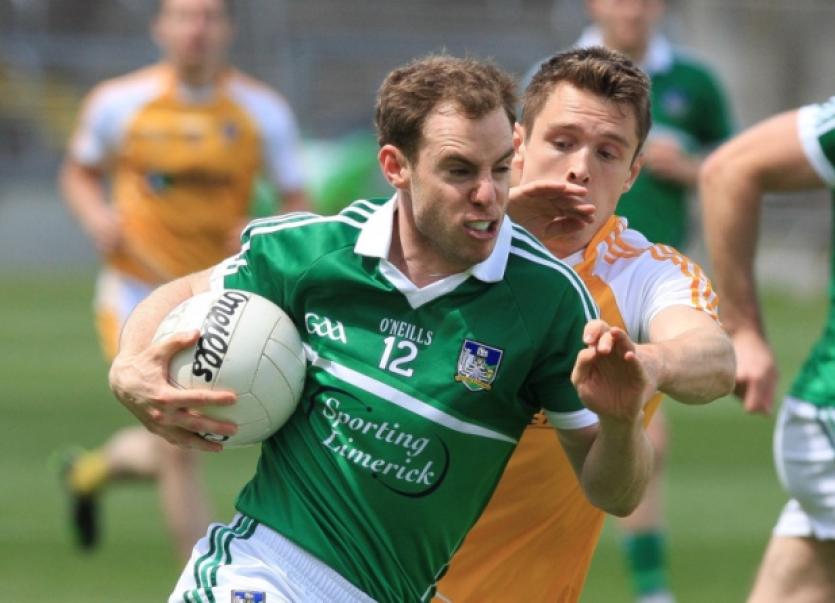 THE Limerick footballers are into the third round of the All Ireland Qualifiers following a 3-11 to 0-15 win over Antrim in the Gaelic Grounds on Saturday.

THE Limerick footballers are into the third round of the All Ireland Qualifiers following a 3-11 to 0-15 win over Antrim in the Gaelic Grounds on Saturday.

Three second-half goals helped Limerick to the impressive five-point win and they now await Monday morning’s Round 3 draw where they will play Tipperary, Sligo or the winners of Laois/Wexford.

Two of the goals came from the penalty spot, with Ger Collins on hand to convert on both occasions. The third goal was scored in injury time when Darragh Treacy punched in from close range after Eoin Hanrahan set him up.

The home side started well and took the lead when Killian Phair opened the scoring after two minutes with a nice score from play.

Shortly after, a good team move by Limerick ended up with Thomas Lee being fouled while shooting. Ian Ryan made no mistake from the resulting free to double Limerick’s early advantage.

Antrim were slower out of the blocks but did get off the mark, courtesy of Paul McCann’s sixth minute effort.

Mark Sweeney was beginning to cause the Limerick defence trouble and a won free to give Paddy Cunningham a routine chance to level the game. The Lamh Dearg man made no mistake and the game was level approaching the nine minute mark.

Back to back Ian Ryan scores, one from play, put Limerick ahead at the quarter hour mark, but lack of creativity from play in the forward line was worrying from a Limerick point of view.

Almost immediately from the kick out, Tony Scullion got possession for Antrim and ran through the Limerick defence with ease. He was eventually pulled back, winning a free, which Cunningham converted.

Thomas Lee doubled Limerick’s advantage before back to back Antrim points tied the match at five points apiece.

There was a scary moment after 26 minutes when Seanie Buckley clashed with Antrim centre back Justin Crozier. Crozier suffered a serious looking elbow injury and the game was stopped for over 10 minutes.

The Antrim man was stretchered off and received a warm ovation from the 727 people in attendance.

Limerick struggled on the resumption of play and conceded the next three scores with Paddy Cunningham (2) and Mark Sweeney doing the damage on the scoreboard.

Corner back Mark O’Riordan settled down the home side with a great point scored with the outside of the boot. This was Limerick’s first score for 24 minutes and the last score of the half. At the change of ends, Limerick trailed by eight points to six.

Antrim started the second half well but their accuracy was off. Three wides in the first three minutes was the result of the poor shooting.

Limerick’s first real move of the half would be a key moment in the match. A good team mover ended up with John Galvin being fouled by Antrim ‘keeper Patrick Flood.

Ger Collins converted the spot kick in the 40th minute for the first score of the second half.

The teams would trade scores for the next 10 minutes with Ian Ryan, John Galvin, Killian Phair and Gearoid Hegarty finding the target for Limerick.

There was another big moment in the game when Seanie Buckley won a 55th minute penalty. He was pulled down by Niall Delargy but the Antrim man received a yellow card – though it could have been black.

Collins switched sides but the result was the same and the goal put Limerick up by 2-10 to 0-11 going into the final quarter hour.

Antrim hit back with three points in a row as time was running out, before a fine John Galvin point in the 64th minute restored a three point lead.

A Paddy Cunningham free reduced the gap to two before the late goal sealed a famous win.

Limerick are back out next weekend in Round 3A.