‘Stand Up and Fight’ for mighty Munster in Marseille 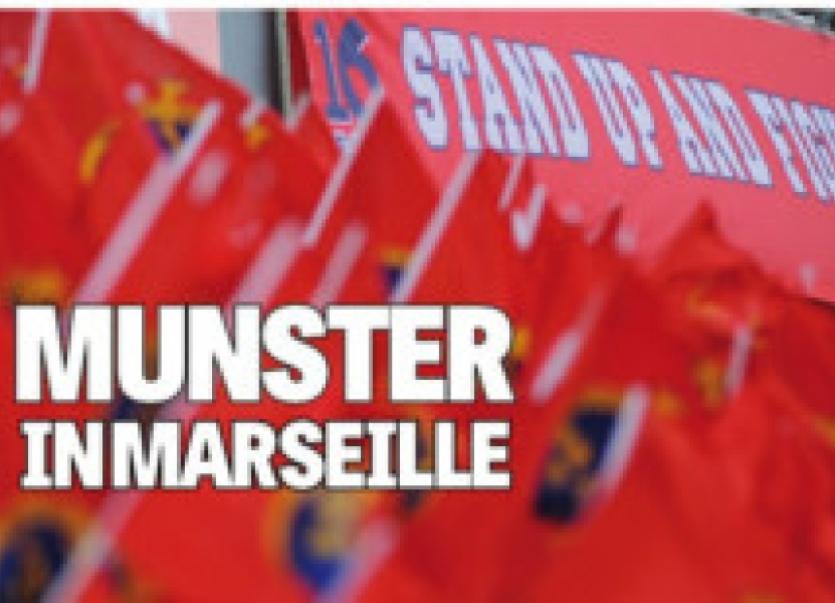 A ROUSING rendition of Stand Up and Fight broke out on board Munster’s team flight as the aircraft touched down at Marseille Airport this Friday evening.

A ROUSING rendition of Stand Up and Fight broke out on board Munster’s team flight as the aircraft touched down at Marseille Airport this Friday evening.

Charter LS6112 carrying the Munster players, backroom team members and scores of supporters from Shannon Airport landed in the South of France at 5.30pm local time and the moment the plane touched down, enthusiastic supporters on board broke into a enthusiastic version of one of Munster’s famed anthems, Stand Up and Fight.

The Munster players gathered in Limerick yesterday for an indoor session with the final training run taking place this Friday morning before the team and management set off for Shannon Airport.

Former Munster winger Doug Howlett has experienced the atmosphere at Sunday’s match venue, the 41,000 capacity Stade Velodrome, in the past with the All-Blacks when playing against France and knows what his former team mates can expect playing there this weekend.

Howlett said: “The fact that you play on what’s primarily a soccer field means that the crowd are much closer to the pitch itself, so it’s literally a sea of people when you run out from the tunnel and look into the crowd. This will be a welcome relief to the Munster players, when they scan the field in this intimidating arena, to see up close the thousands of Munster supporters who have travelled to support them”

“We (New Zealand) were based in Marseille during the 2007 World Cup, so we go to know the city reasonably well. As with most cities in the south of France, it’s got a beautiful scenic backdrop, with plenty nice vistas overlooking the water. It’s a busy old port town with a lot of character and a lot going on. I think all of those travelling from Munster to Marseille are in for a treat and the fact the locals really know their rugby can only add to what will be an already brilliant atmosphere.”

Munster, who are set to wear their alternate navy jerseys on Sunday’s semi-final, having lost the coin toss, will have their captain’s run at the Stade Velodrome at 1pm Irish time on Saturday.