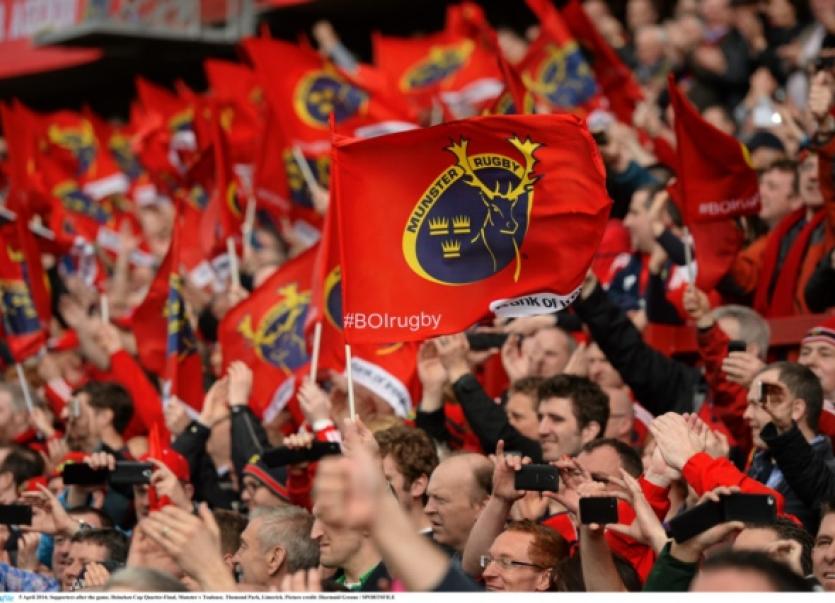 MUNSTER’S dream of landing a third Heineken Cup title in Cardiff next month were shattered in Marseille Sunday afternoon as Rob Penney’s resilient side suffered a heart-breaking 24-16 semi-final defeat to holders Toulon at the Stade Velodrome.

MUNSTER’S dream of landing a third Heineken Cup title in Cardiff next month were shattered in Marseille Sunday afternoon as Rob Penney’s resilient side suffered a heart-breaking 24-16 semi-final defeat to holders Toulon at the Stade Velodrome.

When plucky Munster rallied at the end of the third quarter to trail by just two points, 16-18, with Simon Zebo’s try, superbly converted by Ian Keatley, Munster appeared to hold every chance of shocking their star-studded opponents.

However, two late penalties from the boot of England World Cup winning out-half Jonny Wilkinson guided the holders to victory before an attendance of just over 37,000.

Munster have now won just four of 11 Heineken Cup semi-finals, with seven of those games played in France.

Make no mistake, this was a huge test of Munster, playing against a big-spending Toulon side, boasting an enormous budget, their Club president and millionaire benefactor Mourad Boudjellal has assembled a galaxy of stars at Toulon who boast an operating budget of over euro21 million, several times more than Munster’s.

Munster contributing significantly to their 9-point half-time deficit. Every time Penney’s men worked a score of their own, they seemed to inevitably concede a penalty at the other end of the pitch. And Jonny Wilkinson didn’t need a second invitation to punish their indiscretions.

Munster did have problems in the scrum in that opening quarter as Dave Kilcoyne was penalised on a couple of occasions by referee Wayne Barnes as he perceived Toulon tighthead Carl Hayman was holding the upperhand on his opposite number.

English referee Barnes pinged the Irish side twice to allow Wilkinson move 9-3 in front. Going into this game. Munster had conceded the fewest number of penalties and free kicks of any side in the Heineken Cup with just 8 per match. But they reached that tally in 40 minutes here.

Keatley responded with a second Munster penalty and when Toulon flanker Juan Fernandez Lobbe was yellow-carded for catching Murray in the head, Rob Penney’s men looked in a strong position against the 1/4 favourites.

Even the passionate Toulon supporters who had made the short 50km trek up for the game seemed to go quiet for a few moments.

Worryingly, Munster fell six points behind almost straight from the re-start when World Cup winner Wilkinson slotted a sweet drop goal and while the composed Keatley landed his third penalty goal after Kilcoyne was judged to have gotten the upperhand on Hayman on this occasion at scrum time on 33 minutes, the two-time winners shipped another blow on the call of half-time when Delon Armitage landed a monster penalty goal from inside his own half.

Trailing by nine at half-time, 9-18, Munster desperately needed to bag the first score of the second half.

And the 11-time Heineken Cup semi-finalists managed it on 56 minutes. Following a series of well-executed mauls inside the Toulon ‘22, scrum-half Conor Murray put winger Simon Zebo over in the left corner for a precious try. For good measure the ultra composed Keatley added the extras.

The game took a decisive turn in Toulon’s favour in the 64th minute when Munster winger Keith Earls was sin-binned for a trip on replacement David Smith. Wilkinson again landed the penalty kick from outside the ‘22 and the French sides lead was 21-16.

Toulon looked to have taken a firm grip here. Munster showed admirable resolve however, to take the fight to their opponents and were awarded a kickable 71st minute penalty. With five points between the sides and nine minutes remaining, Munster could have opted for a kick at goal but chose to go to the corner instead. Munster did win the line-out but lost possession subsequently and the opportunity was gone. Wilkinson’s sixth penalty goal of the afternoon in the 78th minute sealed Toulon’s passage to a second consecutive Heineken Cup final.