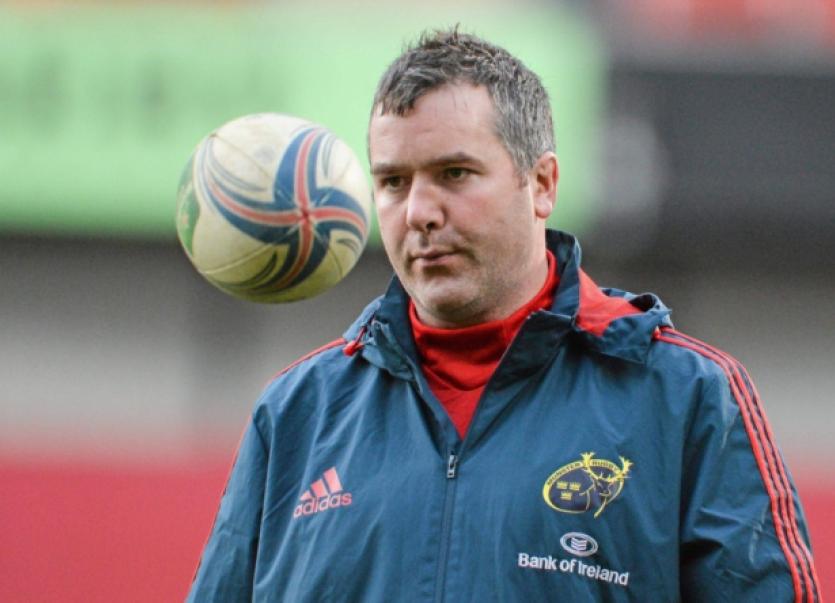 MUNSTER CEO Garrett Fitzgerald said it would be ‘common sense’ to place Anthony Foley among the leading contenders to succeed Rob Penney as the province’s head coach next season.

MUNSTER CEO Garrett Fitzgerald said it would be ‘common sense’ to place Anthony Foley among the leading contenders to succeed Rob Penney as the province’s head coach next season.

New Zealander, Penney will depart Munster this summer to take up a three-year coaching position in Japan.

Fitzgerald said Penney had signed up as head coach for a two-year agreement with the option of a third year (2014/2015), but the Kiwi had declined the option of that third year.

Speaking at UL yesterday, Garrett Fitzgerald said: “Obviously, it is a business we are in and people have to look after their careers, their careers are based around short-term and fixed termed contracts and Rob has his own, I suppose, he has to look at his long-term security, his family, some of his family are in New Zealand.

“We had been chatting on it and he made a decision and I was aware he was considering other options and, as you are aware in the current climate the money in rugby is in Japan and in France but he has got the opportunity, without knowing the detail, of a three year contract in Japan, which takes him nearer to home, nearer to some of his family who had remained at home and we respect the decision.”

Asked about the prospects of forwards coach Anthony Foley being appointed to the top position, Fitzgerald said the former Munster number eight had been down to the last three in the contest to succeed Tony McGahan two years ago.

Fitzgerald said: “The last time (process to appoint Tony McGahan’s successor), when we had the ‘worldwide search’ as was referred to, Anthony (Foley) was in the last three for interviews and did very well at the time.

“He’s worked exceptionally well with other coaches here, with Tony (McGahan) and with Rob and he’s worked at national level and gotten much more experience and he’s getting wiser all the time.”

“If you asked me the question, ‘when is a person sufficiently experienced?’ You never know that.

“Anthony will get the head coach position, whether it is here or whether he has offers elsewhere that’s something you have to take into account. Anthony certainly has the experience at Wolfhounds, national level at U-20 level with us, A level and with the senior team.”

Fitzgerald confirmed that Niall O’Donovan will be remaining in his position of team manager through next season at least.

CEO Fitzgerald said: “Niall (O’Donovan) has agreed and will be staying on. Niall is a very important part of it given his experience and his knowledge of the young players and given what he brings to the overall thing, he’s a hugely important person.

“It’s one year initially, but obviously we’ll review that given that there’ll be a new offer on the table for the new head coach.”

Fitzgerald dismissed the possibility of former Ireland head coach and two-time Heineken Cup winning coach Declan Kidney joining the province as a Director of Rugby, insisting that the current structure would remain in place.

Garrett Fitzgerald explained that a planning application for the new training facility at UL, part of Munster’s move to a one-centre base in Limerick, is set to be lodged in the coming weeks.

Fitzgerald said: “Where we are with the training centre at the moment is it’s due to go to planning in the next three to four weeks, with a view, it will obviously have to go to tender after that. It’s UL doing the thing, we’re working with them.

“The plan initially was for July ‘15 but there may be a few months to that, depending on how the planning process goes but we’re happy with where it is.”

Back on the pitch, Munster face Zebre in the RaboDirect PRO12 at Musgrave Park this Saturday (6.45pm) when Donncha O’Callaghan is set to become Munster’s most capped player if, as expected, he gets game time