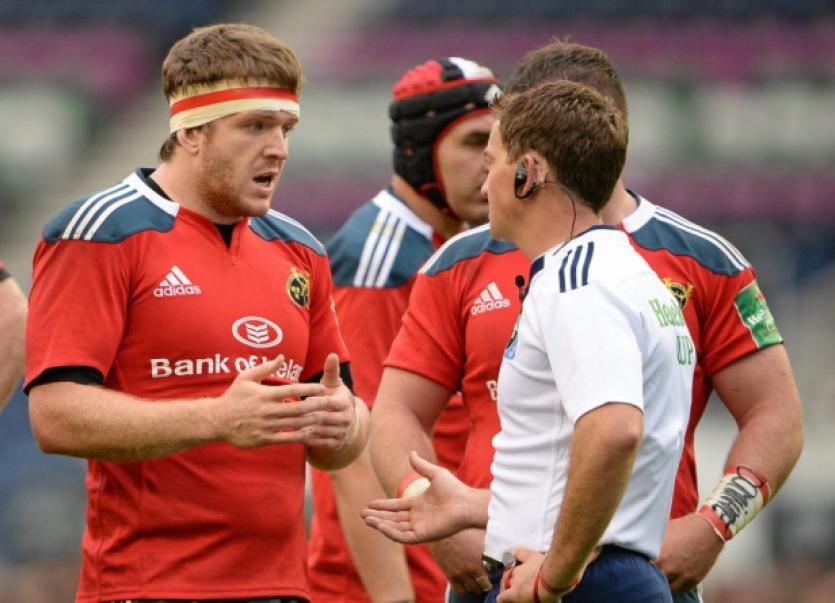 MUNSTER hooker will see a specialist tomorrow, Thursday, to determine to full extent of the knee injury he sustained against the Dragons on Friday night.

MUNSTER hooker will see a specialist tomorrow, Thursday, to determine to full extent of the knee injury he sustained against the Dragons on Friday night.

However, Munster have confirmed that scan results reveal Sherry suffered ‘some damage’ to the ACL in his left knee and the 25-year-old is set for a spell on the sidelines.

Gerhard van den Heever will also see a specialist on Thursday after he sustained a broken bone in his right hand against the Dragons.

Munster have received more positive news on the injury front concerning both Donnacha Ryan and Tommy O’Donnell ahead of Sunday’s crucial Heineken Cup clash with Perpignan at Thomond Park (12.45pm)

Ryan, who has been sidelined with a knee ligaments injury and O’Donnell, who suffered a knee hyper-extension, are both ahead of schedule with their recovery and are back running. The pair are expected to be involved in limited training this Friday. O’Donnell has been out of action since the PRO12 game with Zebre in September, while Ryan is sidelined since the Heineken Cup win overGloucester.

Winger Simon Zebo, whohas been out of action with a broken bone in a foot, will meet with the specialist next week for a review and update on his possible return to training.

Meanwhile, back-row forward Paddy Butler, who required surgery after sustaining a fracture to his right thumb against Edinburgh in October, has had the cast removed and is progressing well. Butler is set to take part in some training from early next week.

Niall Ronan is expected to resume training in two to three weeks as he recovers from sprained knee.

Munster captain, Peter O’Mahony, who missed Friday’s PRO12 win over Dragons with a ‘dead’ leg and second row Dave Foley are both back in full training, while James Coughlan has been cleared to return to full training today having picked up an eye injury against the Dragons.

Meanwhile Munster Rugby and the IRFU have appointed Australian-borrn Adam Trypas as the province’s new head of fitness. Trypas currently works in Perpignan with Super League side, the Catalan Dragons.