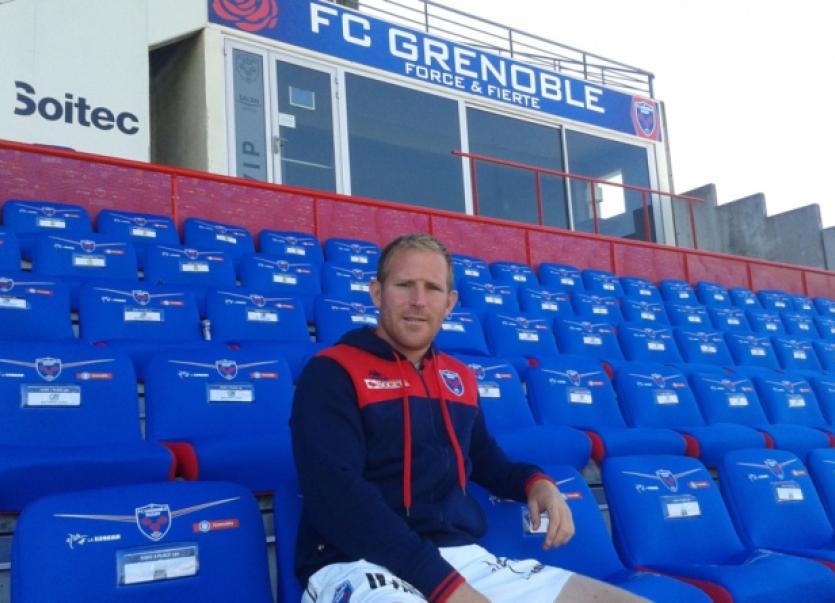 MIKE Prendergast may be earning his living with French Top14 high-flyers Grenoble this season, but his use of the word ‘we’ when talking about Munster suggests that a good portion of the Limerickman will be forever red.

Prendergast is better placed than most to give an educated assessment on the challenges facing Munster in their back-to-back Heineken Cup fixtures with USAP Perpignan, beginning with Sunday’s do-or-die Round 3 clash with the Catalans at Thomond Park (12.45pm).

Grenoble have already played Perpignan in the Top 14 this season and Prendergast is a keen student of the form in the French domestic championship.

Perpignan, who have won just two of their previous seven Heineken Cup pool clashes with Munster,

“PERPIGNAN are one of the French teams who have a love affair with the Heineken Cup. They had Clermont at home this weekend (lost 30-23), now the double header with Munster and then Castres away.

“They are currently ninth in the Top 14 table. It will be interesting to see what team they send to Thomond Park.

“Having said that, I think Munster will get a result at home definitely.

The away game is where the challenge is going to be for Munster. They have only lost twice at home this season.

The Ones to Watch

“James Hook will be well known to Munster fans for his time playing with Wales.

“Lifeimi Mafi, who is unfortunately suspended, has been playing really good rugby down there.

“They have the French winger who made his debut in the autumn internationals, Sofiane Guitoune. He has scored something like seven or eight tries already this season in the Top 14.

“Alastair Strokosh, who I also played with at Gloucester, is super number six. They have a good balance, a good pack and have good line-breakers, runners there.

“Camille Lopez, their fly-half, is knocking on the door with France for the past year or so.

“He is a very, very good 10. Unlike many French 10s, he is good at managing games, he has a good kicking game as well as a running game.

“They are strong all over the pitch. James Hook’s kicking ratio this season has been second to none. Depending on what team they send to Thomond Park, they will be a big challenge at home.

“Having said that, I can see Munster winning the two games.

“We played Perpignan in September. Because there are so many fixtures in France - three games in a week at the time we played them - we sent most of our Formation (Academy) to Aime Giral. We came up short something like 36-14.

“Perpignan have played 13 games in the Top 14 this season, winning six and losing seven. They won five at home.

“Their only away win was against Biarritz who have improved since having started with a losing run of nine games. So, in general, Perpignan have been poor away from home and strong at home.

“In the Heineken Cup they picked up a good bonus point away to Gloucester. Gloucester won it at the end.”

“I think the Stade Aime Giral was more of a bear pit years ago for visiting teams than it is now.

“Peripgnan won the Top 14 in 2010, I think. They had massive, fanatical support. It was similar to going to Thomond Park.

“In the past three or four years, I don’t think their support has been as big. They haven’t been winning trophies.

“Perpignan had financial issues in recent years, but they have a new financial backer in this season. They are very ambitious going forward. At the moment it is not the daunting arena it was.

“I think at home they will turn up with a big fight. You must remember they are in a good position in the Pool.

“They have six points. If they lose the next day in Limerick, they could really target the return game in France and the round five and six games after that.

“French teams manage their season and target their games a small bit because it’s such a long season. Perpignan have a love affair with the Heineken Cup over the years.

“That losing bonus point they picked up in Gloucester earlier in the competition is key. They have a lot of foreign players who see the Heineken Cup as massive.

“They are playing in front of their home supporters, playing a European giant in Munster. They will go for it in the return game.”

“What happened in the All-Blacks game is probably going to boost the provinces more than Ireland because the national team takes a break for two months.

“The boys are back with their provinces. They are straight into the Heineken Cup. Although Ireland lost the whole nation was lifted by it.

“There is going to be a buzz. The players themselves, Paul (O’Connell), Peter (O’Mahony), Conor (Murray), there will be a buzz. Hopefully that will feed through into the Heineken Cup.

“If we had won the game it would have been either better.”

“We are currently seventh in the Top 14 table after our 25-18 win over Toulouse on Saturday night.

“It is a different League this season. Normally at this time of the year the Toulons, Toulouses, Clermonts are pulling away by eight and 10 points. But every team is beating each other here this year.

“The cultural changes are huge. It’s a massive, massive change. One thing it is is challenging every single day. They don’t have skills coaches here. A lot of it is big picture, end product. It is about getting the finer details right.

“It is why I was brought in to Grenoble as a skills coach. That is a challenge in itself. But the players have bought into it as well.

“It is good to see a guy like James Hart coming through as well. I do a good deal of work with him. (22-year-old Dublin-born scrum half who kicked 20 points in their weekend win over Toulouse). He works unbelievably hard on his game.

“The language is a big thing. My rugby French is improving every day and my level of general French is getting a lot better as well. I am really enjoying it both on and off the pitch.”

“We played Racing Metro earlier in the season, beating them in Paris.

“I went for a meal afterwards with Rog (Ronan O’Gara). We sat down for an hour and chatted. We had been on the phone over and back.

“We swapped notes about how the set-ups are in the clubs, the different cultures, nationalities. I keep in contact with Rog and we bounce things off each other.

“He says the same thing - it has been a huge experience for him too, especially given the fact that it is his first year coaching. I think the fact the transition from playing to coaching happened so quickly for him was a good thing. He immersed himself straight in.”

“We have Wasps home and away in the Challenge Cup this weekend and next.

“We don’t have massive depth in our squad. This is our second year in the Top 14. The club is building. For the first two games, we gave a lot of the youth a game.

“We gave guys coming back from injury, those who haven’t played a lot game time. We had that game against Toulouse at home last weekend, two weeks of Amlin and then Stade Franacais in Paris the following week in the Top 14 14. The League is wide open.

“The League is priority for us this season. We are looking at the Amlin to develop players, the likes of Shane O’Leary (previously with Young Munster) won two caps for the first two games.

“Hopefully he will be involved for the next two games. He is one of 10 U-21, U-22 and U-23 players that we look to give game time to. Players kicked on from getting experience last season.”

Targets for the Season

“In the Top 14 the goal is to keep building and winning.

“For us the mind set here ismaintaining our status in the League as high up as we can. If we qualify for European competition, well and good, but if not they are looking to build, bring in more and more high profile players over the next year or two. Instead of looking for a quick fix, build the club and a culture, being able to attract the right players to the club.

“I have a one year contract at the moment. I would like to stay for another season or two. I am enjoying the experience. We will see what happens.”