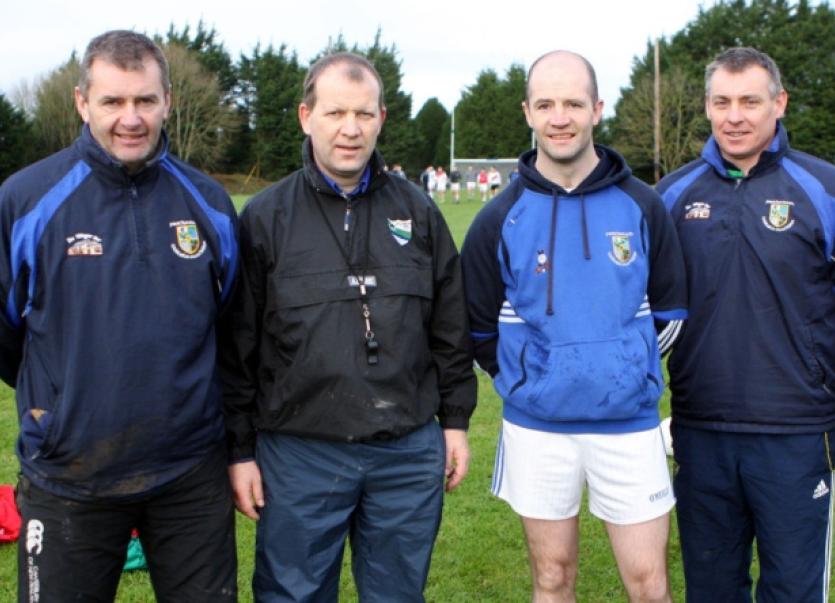 FEOHANAGH-Castlemahon bid to break the Kerry stranglehold on the Munster junior A football championship this Sunday in Mallow at 1.30.

FEOHANAGH-Castlemahon bid to break the Kerry stranglehold on the Munster junior A football championship this Sunday in Mallow at 1.30.

The west Limerick side become the fifth county side to appear in the provincial decider in the last six years.

But they attempt to go one better than Bruff, Mountcollins, Bruree and Cappamore.

All four previous finalists lost to Kerry opposition - indeed The Kingdom have won eight of the last 10 finals at this level.

“I can promise you that these players will get it their all and won’t leave anything on the field, vowed Feohanagh-Castlemahon manager Diarmuid Creedon.

“Limerick teams might be in awe of Kerry sometimes but if we can get that out of our heads we will be there or thereabouts. The first 20-minutes will be vital and we will need to start well,” said Creedon.

The manager is in his seventh year at the helm.

“I could not speak highly enough of the players this season. I remember they won the West final in hurling and not one of them drank and they trained for football the following evening. The same after they lost the county hurling final, they were straight back to football.”

In his first season in charge, Creedon led the club to a county semi-final.

“After that we lost every year at the west semi-final and every year by a point,” he recalled.

“We were always there or thereabouts but couldn’t get over the line. Maybe nerves caught us some of the other years. The west semi-final this year against Granagh-Ballingarry was massive. It was a monkey off the back. The dressing room after that game was like winning a county final. After that we played with a bit more freedom.”

Creedon is joined in the management team by selectors John Kenny and Richard Browne.

This year they added an outside coach with Newcastle West’s former Limerick selector Billy Lee coming on board.

“Billy’s impact was fantastic. Along with Richard Browne, they brought a fresh impetus. The players responded.”

For much of the year, Feohanagh-Castlemahon were chasing a county junior double.

“Thirteen of the starting football team play hurling. Our biggest fear all year was that maybe were weren’t getting enough football but the momentum of the winning carried us along,” said Creedon.

“If anything all the matches almost kept them fresh because there wasn’t much training in-between. But in fairness to the players they did everything right with their diet and recovery in the swimming pool and all that.”

So what helped the men in white and blue to finally make the break through this season.

“The lads really responded this season. We had one or two young fellas coming in but others maybe thought they were in last chance saloon. I would have to say the football dressing room was a great place to be all year and when its happy like that everyone benefits.”

Standing between Feohanagh-Castlemahon and history are Kerry’s Keel, who beat Mitchelstown and Mount Sion in the Munster club.

They restricted both sides to just three points, while winning by eight and 16-points.

They will have key men in forward Gary Sayers, captain and centre back Martin Burke and midfielder James Long.

But Feohanagh-Castlemahon have also sparkled in Munster.

“The win over Drom Inch was the best that I ever saw from a Castlemahon side,” said the manager.

“After we won the county final we said that anything after that would be a bonus. But at the same time we wanted to give it a lash. All the players are really looking forward to the Munster final. The whole area is gone wild for it and in fairness our support has been unbelievable and Mallow should be a sea of blue and white on Sunday.”