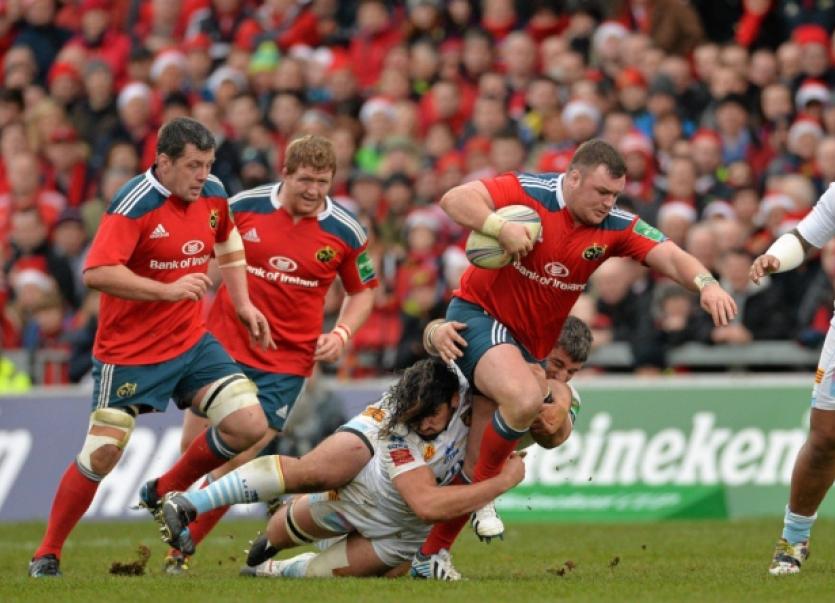 MUNSTER very much remain masters of their own destiny in Heineken Cup Pool 6, following their 36-8 bonus point win over USAP Perpignan at Thomond Park.

MUNSTER very much remain masters of their own destiny in Heineken Cup Pool 6, following their 36-8 bonus point win over USAP Perpignan at Thomond Park.

Rob Penney’s men outscored their opponents by five tries to one to move two points clear of Gloucester at the top of Pool 6.

Munster will have a six-day turnaround now to their return meeting with the Catalans at the Stade Aime Giral on Saturday next, 3.40pm Irish time.

Penney’s men look set to travel to France without their hugely influential Lions scrum-half Conor Murray who picked up an unfortunate knee injury inside the opening quarter. Out-half Ian Keatley, who sustained a ‘corked’ thigh injury and Felix Jones, who suffered from cramp, are expected to be fit for the Round 4 clash.

Perpignan, mid-table in the Top 14, had won just once on he road in their domestic League this season, and they never looked like winning at Thomond Park yesterday.

Roared on by 23,615 enthusiastic supporters, Munster laid the foundation for this win in the opening half when the home side bagged three tries to lead 22-0 at the break.

Unbackable favourites at 1/12 before kick-off, Munster made the perfect started when the hugely impressive Sean Dougall crossed for the game’s opening try inside three minutes.

Two more five -pointers in the second quarter from Dave Kilcoyne - his first ever in the competition - and Man of the Match Keith Earls helped the home side build that significantly advantage at the break.

Whether through a degree of complacency or a lack of focus was to blame, but it took Munster until the 65th minute to secure a bonus point.

Munster were too lateral at times during that scrappy third quarter, lacking the penetration to really finish the visitors off.

The forwards provided it with a quarter of an hour left as they propelled a Varley-controlled line out drive up to the try-line and replacement prop Kisi Pulu paid the price for bringing it down illegally - conceding a penalty try and a yellow card.

Munster added a fifth try through James Coughlan in the closing minutes, before Perpignan crossed for a consolation score through winger Joffrey Michel.

Hopefully, Munster’s inability to rack up more than five tries against their gritty, if limited, opponents won’t come back to haunt them.

The final minutes were notable too for a Heineken Cup debut for Munster and Shannon hooker, Duncan Casey who was sprung from the replacements bench in the 74th minute.

Casey may have just had a cameo role to play, but the former Glenstal Abbey student can be well pleased with how he performed in the rarified atmosphere of the Heineken Cup.

Despite the heavy nature of this defeat, Munster can expect Perpignan to provide a far more formidable challenge at the Stade Aime Giral this weekend.

Former Munster centre Lifeimi Mafi will be available for selection to face his old team mates having missed yesterday’s trip to Limerick through suspension.

Munster will need to tighten up on their set-piece play as a number of their line-outs went astray during yesterday’s game.

The two-time Cup winners may have the fit-again Tommy O’Donnell available for inclusion in the squad next weekend after he made his comeback from injury in the province’s B&I Cup defeat to Plymouth on Friday night.

Munster will have breathed a sigh of relief to learn that Gloucester had narrowly missed out on securing a try bonus point in their 23-12 away victory over Edinburgh in the pool’s other weekend fixture.

Gloucester will be confident of picking up a try bonus point in their return meeting with Edinburgh at Kingsholm on Sunday.

However, this pool could well come down to the meeting of Munster and Gloucester at Kingsholm in January.