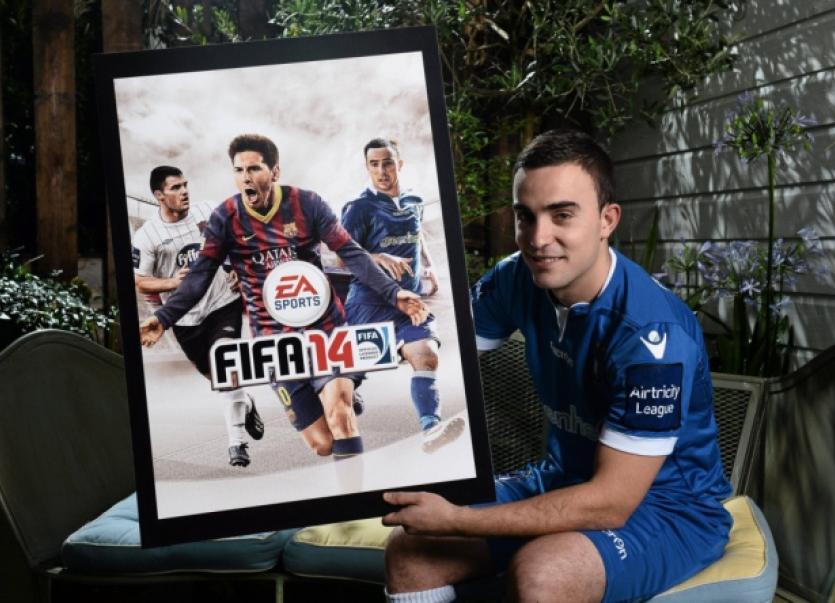 LIMERICK FC star Shane Tracy has been chosen to appear alongside Barcelona superstar Lionel Messi on the cover of the Irish version of FIFA 14.

LIMERICK FC star Shane Tracy has been chosen to appear alongside Barcelona superstar Lionel Messi on the cover of the Irish version of FIFA 14.

Tracy and Patrick Hoban from Dundalk FC were the two League of Ireland players selected in the public vote to decide who would make the cover of the hugely popular FIFA 14 soccer game alongisde world renowned Messi.

Arsenal and England midfielder Wilshere took to Twitter to encourage his close on 500,000 followers to vote for Tracy in the battle to appear on the Irish cover of the hugely popular soccer video game.

Limerick FC midfielder Tracy spent two seasons at North London giants Arsenal after been spotted playing with local schoolboy side Wembley Rovers. The 24-year-old joined ‘The Gunners’ in August 2005 and made more appearances than any other player for the Under-18s, scoring twice from 28 outings. In the 2005-06 season, Shane stepped up to the reserve side making eight appearances at that level. The exciting midfielder returned to Ireland to play in the Airtricity league in 2007.

Shane Tracy’s sister Yvonne currently plays with the Arsenal Ladies team and is a vastly experienced Republic of Ireland international.

Members of the public voted for their choice of League of Ireland player to appear on FIFA 14 through the highly popular www.extratime.ie website and Tracy and Dundalk’s Patrick Hoban were chosen.

FIFA 14 will be available from Gamestop, XtraVision, HMV and Smyths stores nationwide from midnight tonight, Thursday.