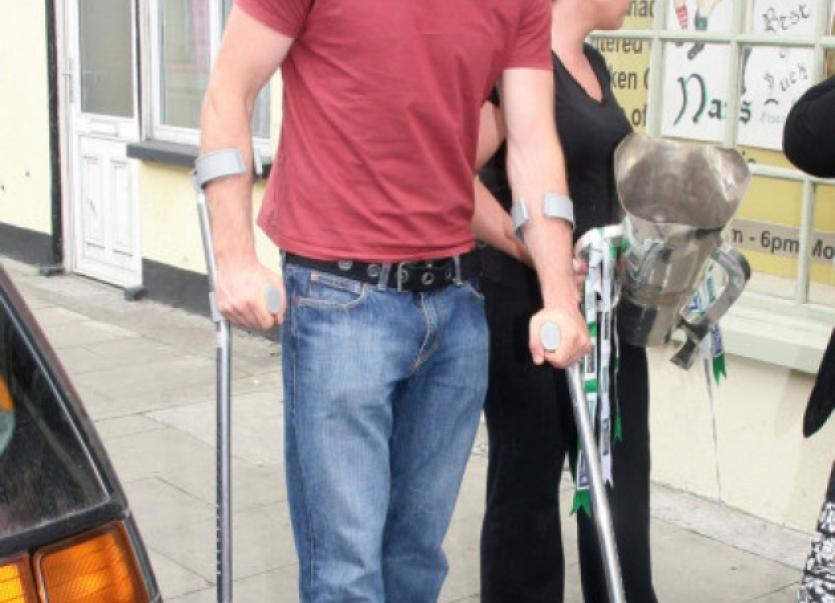 The wing back was forced off injured during the second half of the nine point win over Cork in the Gaelic Grounds.

The team’s vice-captain is now awaiting results of a scan on the leg injury and this Monday was on crutches.

It is understood that O’Brien hasn’t sustained any broken bones but damage to ligaments would put the defender in a race against time for the All-Ireland semi-final.

O’Brien was also involved in the first half sending off of Patrick Horgan. The Cork attacker was dismissed for a wild pull on the Limerick man under a dropping ball.

Another carrying a slight knock out of the Munster final is sub Conor Allis.

The Croom man also picked up a slight leg injury but should be ok with a period of rest.

Limerick’s first appearance in the last four of the All-Ireland senior hurling championship since 2009 will take place on August 18 in Croke Park.

Limerick will have to wait until the quarter-finals are played on Sunday June 28 to confirm their opposition for the last four game.

Potential opponents for John Allen’s side are Kilkenny, Galway or Clare. If Kilkenny and Galway are the quarter-finals winners, it will be a straight draw to determine the pairings for semi-finalists Limerick and Dublin. As provincial winners, Limerick and Dublin will be kept apart in the semi-finals.

Where possible teams that have already met in the championship would be kept apart at the semi-final stage. Therefore if Kilkenny and Clare were to win the respective quarter-finals, Limerick would be played Kilkenny next month.

Regardless of the opposition the semi-final will take place in Croke Park on August 18 and the game will be televised live on RTE television.

Limerick full forward Declan Hannon is now hoping that his side can now build on the momentum of the first Munster title since 1996.

“Look at the scenes at the final whistle - it just showed how much it meant to people, it was sheer elation,” he said.

Hannon is one of just two members of the 2011 Munster U-21 winning teams to start Sunday’s senior final.

“It’s been 16 or 17 years waiting to win Munster - this is just my third year on the panel but the likes of Niall (Moran) and Donal O’Grady are playing 10 or 12 years,” explained Hannon, who scored eight points.

“The place was just unreal at the final whistle. I met Niall Moran and he was nearly in tears - they were just unbelieable scenes,” said the former Ardscoil Ris star hurler.

He added: “We are just absolutley delighted.”