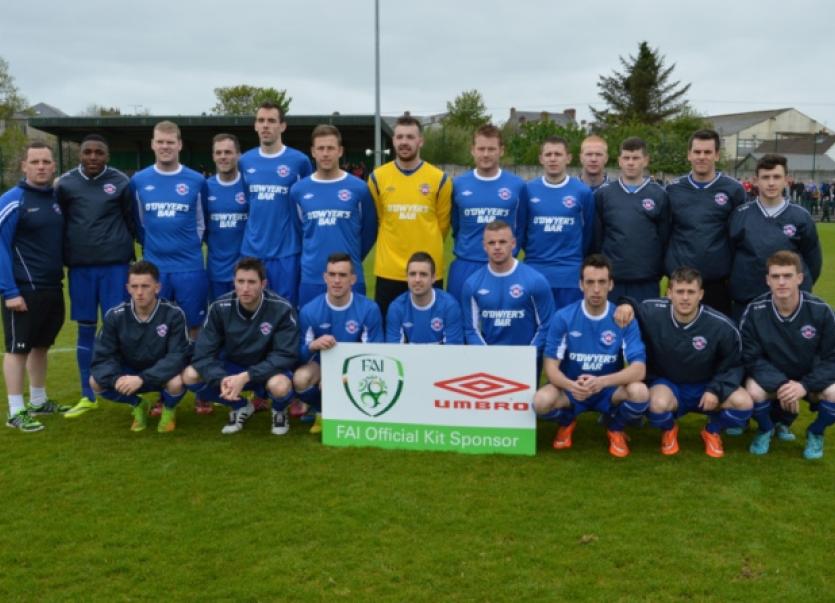 Limerick DL suffered a heart breaking 2-1 defeat to the Inishowen League in the final of the Oscar Traynor Trophy in Donegal on Sunday afternoon.

Limerick DL suffered a heart breaking 2-1 defeat to the Inishowen League in the final of the Oscar Traynor Trophy in Donegal on Sunday afternoon.

The long trip to the Peninsula proved fruitless for the Limerick lads when two first half mistakes proved too big a hurdle to bounce back from.

Other than the goals Limerick keeper Gary Neville hardly had a save to make while to their credit Limerick never gave up the chase but despite getting a number of chances it was the home side who held out for victory.

Limerick last won the competition in 1996 and since then have now suffered defeat in four finals.

Despite a tentative start to proceedings Limerick had a great chance to take the lead after just four minutes.

John Connery made good ground down the right and his delivery into the area saw Shane Clarke challenge home keeper Pat Harkin. The ball spilled but Eoin Hanrahan was unable to get his effort on target shooting narrowly wide.

The home side took the lead on 12 minutes with a stroke of good fortune. Aled Harkin braced to collect a pass but he slipped at the crucial moment allowing Shane Canning to race clear and when he centred for Shane McLoughlin the striker kept his cool to fire past Gary Neville.

Limerick tired to take the game to the opposition but the home side were proving a tough nut to crack and more often than not good approach work went unrewarded against a determined back four.

Things got even worse for Limerick ten minutes before the break when Kieran O’Connell’s pass back to Tom Clarke was on the short side and man of the match Kieran McDaid nipped in between the two Limerick players to gather before firing past the advancing Neville.

With the home supporters still celebrating the goal Limerick pulled one back. A free on half way by Pat Mullins pout John Tierney away on the right and his delivery was flicked on by O’Connell and Thomas Clarke arrived on cue to finish to the net from six yards.

Just before the break Shane Clarke went within a whisker of levelling the scores when he raced onto Mike O’Gorman’s deft through ball but his shot across the face of goal was kept out at the far post by Inishowen Captain Matt Byrne at the expense of a fruitless corner kick.

The second half was a dour affair and despite changing their format Limerick still they could not break down a resolute defence.

At the start of the half Gary Neville’s long kick out was flicked on by Eoin Hanrahan and John Tierney centred for Mike O’Gorman had a great chance to equalise but opted to control the ball before shooting allowing Harkin to race from his line to smother the danger.

Ten minutes later Wayne Colbert broke from half way; played inside to Connery who in turn picked out O’Gorman but from close range the keeper came out tops again.

Before the end Limerick’s last effort of note saw Connery’s delivery met by Shane Clarke but jis header was pushed away to safety by Harkin.

The Limerick side had to endure a long journey back. They will feel they left this one behind but they can now take a well earned break and come back refreshed for a new season.