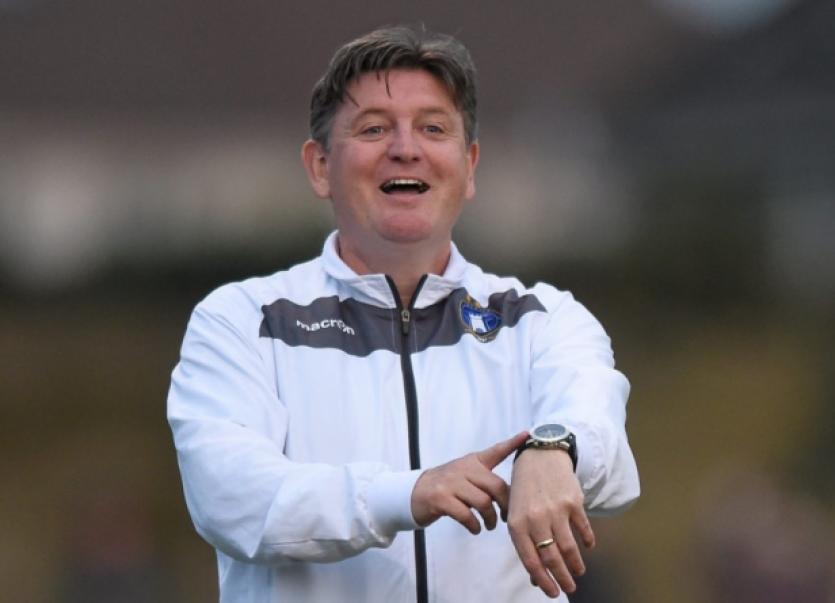 Speaking after his side’s one-nil defeat to Longford Town on Saturday, Martin Russell believes his charges didn’t get what they deserved.

Speaking after his side’s one-nil defeat to Longford Town on Saturday, Martin Russell believes his charges didn’t get what they deserved.

He said: “We’ve come away from home, we’ve three seventeen year olds, an eighteen-year old, a couple of twenty-one year olds, but yet have come here, created four glorious chances and not managed to take one of them, and been beaten by a single goal. The level, all things considered, was very decent. I’m frustrated they didn’t get a reward in a tight game.

“We just haven’t found the back of the net whether it be them getting a block in and then at the other end, the boy is running away from goal. The ball hits off him and it falls to his feet in front of goal and he finishes it. It’s hard to take and that’s why it feels frustrating that we don’t seem to be getting that rub of the green, but the effort from the young lads, being thrown in at the moment and being asked to step up to the mark has been great. It bodes well for these young players to get this experience and down the road they will be better for it.”

Limerick have really struggled to score goals up to now and Russell was once again left frustrated by the wasted opportunities. “There was four very golden chances we created. We had two headers that were both off target, then Paul’s one right at the end. If it had gone in, it would have been a reward for the performance because there was very little in the game and given the type of squad that we’ve travelled with tonight, I felt they deserved more.”

Seventeen-year-old Tommy Holland made his first senior appearance and really impressed on the night. Martin Russell was quick to praise him accordingly.

“Tommy had to step up because the number one from last week Conor O’Donnell has been ill today and couldn’t attend the game. He was first class today. He did everything he had to do and the goal beat him for pace from six or seven yards. All the other facets of his game were decent tonight and it bodes well for Tommy’s future. You’re always looking when young players come in, to see where they’re at and you always want them to be able to step up to the mark. To be fair tonight, Tommy didn’t make us any weaker.”

Limerick’s next game is against Bray Wanderers in the FAI Cup next Friday, May 29th, at the Carlisle Grounds.