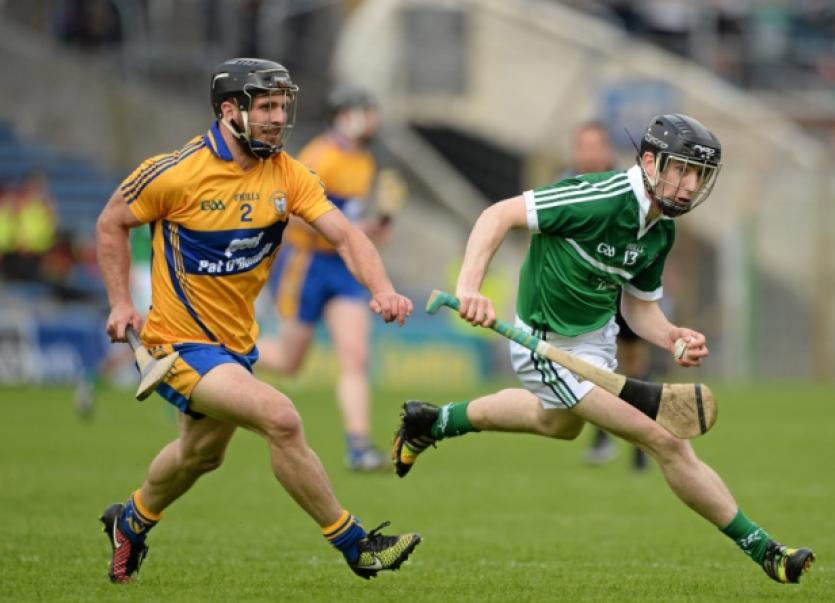 LIMERICK have won in the Munster SHC for a third successive season with a 1-19 to 2-15 win over Clare in Semple Stadium in Thurles on Sunday.

LIMERICK have won in the Munster SHC for a third successive season with a 1-19 to 2-15 win over Clare in Semple Stadium in Thurles on Sunday.

Jerome O’Connell casts an eye over the performances of the Limerick players in the tight derby battle.

Beaten twice on his debut but both were brilliant finishes from Aaron Cunningham. True to form the puckouts of the 26 year old Kilmallock man were swift and accurate. Clare didn’t have a shot for goal other than the Cunningham goals.

It was a day when Limerick defenders often found themselves picking up the nearest player to mark. Got caught once or twice with balls in over his head but did manage to recover.

It may have looked like McCarthy was on the back foot for much of the game but the reality is that he went toe-to-toe with Clare goal scoring threat Shane O’Donnell and kept him to just one point 70-minutes. Yes, McCarthy was rounded but the net result of one point for O’Donnell would have been taken by any Limerick supporter prior to the game.

No 100% man marking role of Tony Kelly but Hickey did set in front of Richie McCarthy and Shane O’Donnell at times to help cut off the supple lines. Also kept David Reidy underwraps in that opening half. When Clare came battling in the second half, Hickey was caught out of place once or twice and rounded for Cunningham’s second goal.

A solid debut for the Patrickswell man at wing back in his first Munster SHC start. Especially in the first half he got on an amount of ball and looked tidy in possession. Scored a fine point in the 21st minute to put Limerick 0-8 to 0-6 clear.

Revelled in his role at centre back. Didn’t totally shadow Tony Kelly but of dual, the Kilmallock man certainly emerged the better, although Kelly scored 0-2. O’Mahony was a rock of consistency and swept up an amount of breaking ball and delivered into the attack, albeit there were two wild wides.

Looked most comfortable in his new role at wing back. Picked up Limerick’s only yellow card in the 20th minute but didn’t deter him. One of the highlights of the game was his point 11-minutes into the second half when he soloed forward with purpose to help the Limerick response after Clare had gone ahead. Condon was the free man for a period early in the second half.

Especially in the first half, O’Brien helped to put Limerick on the forward foot. Hit the first point of the game after 55-seconds to kick-start a fine first half display, which ensured no momentum for Clare as Limerick bossed much of the middle third.

Not his usual all action self but it was a game where the midfielders had to plug holes and close down space and that’s what Limerick did to perfection as part of their tactical plan. Hit two of Limerick’s six first half wides.

Tactics meant that more often than not the Limerick captain dropped back into midfield. Saw a lot of ball in the opening half he was on the receiving end of the blow from Pat Donnellan that saw the Clare captain get a red card in first half injury time.

A quiet outing from the Adare man but like the rest of the half back line was part of the tactical plan to crowd the middle and leave the scoring to the inside line. To be fair, his direct opponent Conor Ryan wasn’t the dominant figure at centre back that Clare would have wanted.

Was never going to stay at wing forward and he certainly didn’t as he worked up way up and down and field. Jack Browne followed and this allowed extra space for Cian Lynch to prosper.

Finished with 1-1 and on top of that was fouled for three of Shane Dowling’s frees. Had a right battle with David McInerney in the first half but came to life in the second half with his scores.

Didn’t score from play and wasn’t that prominent. Yet, he delivered the ball into the goalmouth for Mulcahy’s goal and had one memorable early caught early on. But when it comes to free Dowling was top class. Yes he missed a couple in the first half but into that wind in the second half he was immense and ultimately ended with 0-11 (10frees and 1 ‘65).

What a debut for the Patrickswell man. From the off he sparkled with his undoubted skill. Ended with three points and caused all sorts of trouble for Domhnaill O’Donovan. Deservingly named RTE Sunday Game Man of the Match.

Limerick’s first substitution was the Murroe-Boher man on 54-minutes when he replaced Donal O’Grady. It last a mere seconds but only time will tell if Limerick are to appeal what looks a very hard red card

The Ahane man replaced Stephen Walsh in the 62nd minute

The Adare defender replaced Seamus Hickey in the 66th minute

What a debut for Fitzgibbon, who popped up with what was the winning point in the 67th minute. Just one minute earlier he replaced James Ryan.

A first inter-county appearance of the year for Downes after a length injury lay-off. Replaced Paul Brown in injury time and one for the rest of the year.