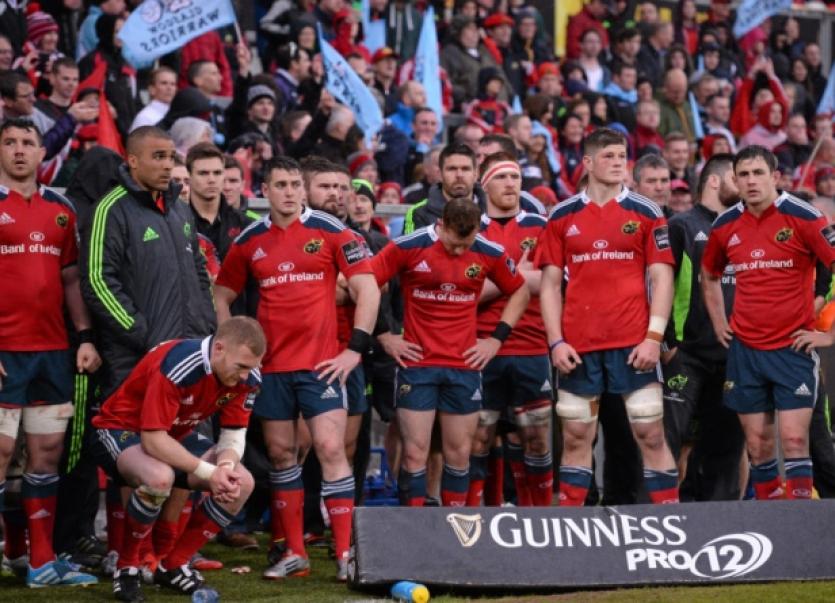 MUNSTER head coach, Anthony Foley admitted their 18-point thumping at the hands of Glasgow in the Guinness PRO12 final was ‘hard to take’ as his side’s bid for a fourth title was scuppered in spectacular fashion.

MUNSTER head coach, Anthony Foley admitted their 18-point thumping at the hands of Glasgow in the Guinness PRO12 final was ‘hard to take’ as his side’s bid for a fourth title was scuppered in spectacular fashion.

Clinical Glasgow ran in four excellent tries to claim the PRO12 title for the first time on a 31-13 scoreline at Belfast’s Kingspan Stadium on Saturday night.

The game was a hugely disappointing way for the curtain to fall on Paul O’Connell’s distinguished Munster career, while the likes of JJ Hanrahan, Andrew Smith, Paddy Butler and Sean Dougall are also set to depart the province this summer.

Head coach Foley said it is crucial that pre-match favourites Munster learn from the shattering defeat.

Foley said: “It’s hard to take but a lot of us have been through this situation before and it’s about understanding it, learning from it and making sure we keep going forward. It’s a relatively young side, we’ll obviously lose a few guys but hopefully we can get back into this situation again next year.

“With the way the league is now run it’s hard enough to get into the top 4, never mind make it to the final, so it’s about maintaining what we’re doing and building on it.”

“Tonight Glasgow were everything that we thought they were capable of and if you give them time and allow them into the open space with their big players, they will make the off-loads and get into the open channels. Warriors’ support play and offloading was excellent today, we saw it in abundance, especially in the first half and we’re sorry that we couldn’t control it better. We had prepared for it but failed on that front today.

“We didn’t control the kick side of the game, allowing them easy possession in our own half and we got turned over way too often at the breakdown. Also in the second half we tried to play from too deep.