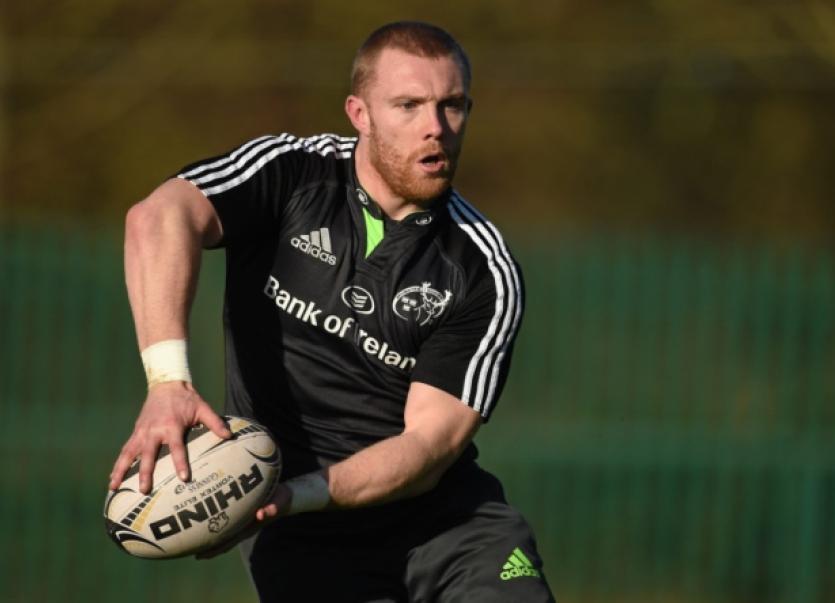 MUNSTER winger Keith Earls is closing in a long-awaited return to action in Saturday’s Guinness PRO12 clash with basement side Zebre in Italy, 3pm.

MUNSTER winger Keith Earls is closing in a long-awaited return to action in Saturday’s Guinness PRO12 clash with basement side Zebre in Italy, 3pm.

Twenty seven-year-old Earls, who has not played for Munster this season after undergoing surgery on his right knee at the end of September, trained with the Munster squad at CIT in Cork this Tuesday.

A return to action this weekend for Earls would be a major boost for Munster ahead of two crucial European Champions Cup ties away to Saracens and at home to Sale later this month.

Third-placed Munster will be looking to bounce back to winning ways at the Stadio XXV Aprile this weekend following their disappointing defeat to Connacht on New Year’s Day in Galway.

Munster assistant coach, Ian Costello said: “There is a rehab protocol Keith Earls has got to go through and it has been managed over the last few weeks. The first step was trying to get through part of a session today (Tuesday).

“He went really well, but the real assessment will be in the morning to see how he responds to that, see if he has any soreness, any stiffness. If he responds well to it, it would be with a view to progressing it on a little bit further later in the week – then a decision can be made. We have left ourselves in a position where we don’t have to do that straight away.”

Costello said Earls could still feature against Saracens on Saturday week even if he doesn’t see any game time this weekend in Italy.

“We are trying to gather all the information to make the best decision (about his return date), it doesn’t rule Keith in or out (of the Saracens tie) regardless – it is something we will discuss when we find how he responded to training.”

Zebre have now slipped to three successive league defeats since their 18-10 victory over Edinburgh in Parma in round nine. Zebre lost home and away to Treviso in recent weeks.