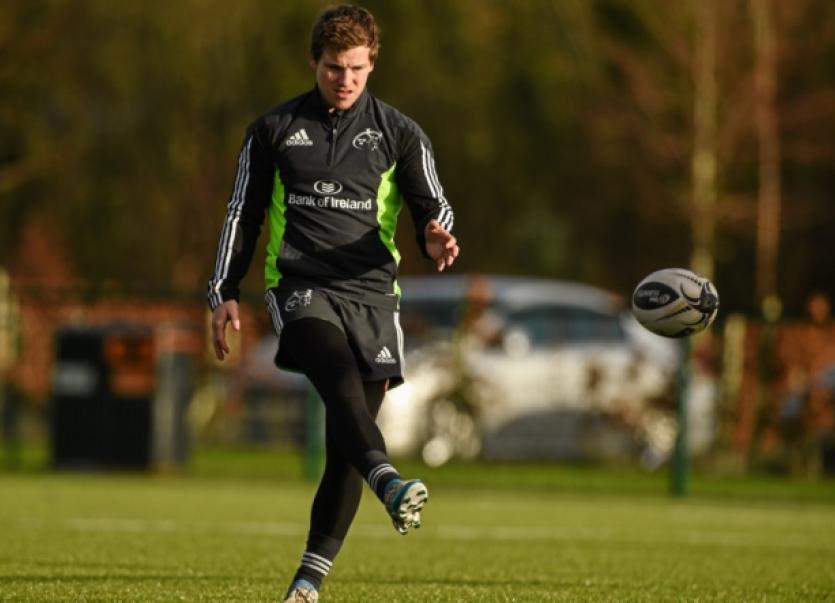 GARRYOWEN scrum-half Neil Cronin smiles to himself standing in the corridor outside one of the club’s dressing rooms in Dooradoyle. It’s the first Saturday in 2015 and he and his rugby-playing brothers, Sean, with Leinster in the PRO12, and Liam, with Shannon in AIL 1B, are off to winning starts. The Shannon win is especially sweet for Neil as it has boosted Garryowen’s promotion hopes in Division 1B of the AIL.

Garryowen scrum-halves don’t normally celebrate Shannon wins, but the rugby-mad Cronin family from Killonan, Castletroy has close ties to the Parish club. Hooker Sean plied his trade with Shannon for several seasons before progressing to Leinster and Ireland, while younger brother Liam, also a promising hooker, currently lines out for the Coonagh club in the AIL.

Part of his course involved a stint of teacher training practice which he recently completed at Castletroy College, the Limerick rugby nursery he captained to an historic first ever Munster Schools Junior Cup success in 2008. However, a telephone call from Munster rugby coach Anthony Foley during the autumn forced a dramatic change to his daily routine.

Neil Cronin: “From September to Christmas, I was doing my teacher training practice at Castletroy College. I teach Technical Drawing. I was about seven weeks into it when I got the call from Munster.

“Anthony Foley rang me up after Garryowen played UL-Bohs in the AIL in November. The coaches were at the game.

“He just said he would like if I came in and they would have a look at me. I was never in the Munster set-up, but I often came in for training sessions. I played in a few interpros for the ‘A’ team the previous year. They may have been down a scrum-half.

“This time round, it has snowballed from there really for me. It’s like a dream sometimes.

“In fairness to the Munster lads, they are great, they don’t look at you as a young fella, they all kinda know you. It helps, I suppose, to have Sean (brother) up at Leinster. They all know him as well. At Munster, they expect a standard of you because you are there. They know you can play. It’s like, ‘you are here for a reason, show it.’

NC: “I played British and Irish Cup games at home to Worcester and away to Bristol. The standard is close enough to All-Ireland League. Maybe the physicality of it is a big higher.

“I played the 80 minutes against Worcester at CIT on a Friday night in December. The next day I ended up playing for Garryowen against Galwegians in the AIL.

“I was on the bench for the AIL match, but Jamie (Glynn) got injured.

“I was still a bit sore because of the physicality of the night before. Worcester are a professional set-up, played in the Aviva Premiership last season. The weather for the AIL game was awful too. But it is always good to play with the club.

“After all, it’s because of the club that I am involved with Munster. You have to repay them for that.”

On the Bench for Ulster

NC: “Because I am not contracted my time with Munster was week to week.

“Doing my teaching practice in Castletroy College as well, I was balancing it with Munster training.

“I just went up to Anthony Foley and Mick O’Driscoll before the Ulster game and asked them if I was still due in. They told me I was in the match-day squad for Ulster. I was shocked. They reassured me that they had full faith in me, that it wasn’t just about numbers.

“When I go to do the warm-up with Garryowen, I might kick a drop goal or I might kick a penalty off the ground, do my own thing a bit. Then Munster are telling you to get into a warm-up routine, do what you had to do. I wasn’t going to start kicking drop goals!.”

NC: “I didn’t come on against Ulster, but then against Leinster at Thomond Park on St Stephen’s Day, when I was told to warm up, my reaction was like ‘are you sure?’ It is great, you are dying to get into the action.

“Your first appearance is always going to be nerve-racking. I came on for a line out. I remember looking at it coming down and you are looking at these monsters of men. It is different when I look at it. I could tell so many pairs of eyes were on me in the crowd.

“There was a sense of responsibility on me as well. All of a sudden then, once the game gets going, it is like you are back in Dooradoyle. It was only when the game stops you take it all in.

“You are wondering is it all real. But once the game goes again, a fella runs into you, it is nothing different.

“Andy Lee came into our dressing room afterwards and they got me into the middle of the circle of players with him. That was surreal. Everyone came in, all the international boys who were rested for that day.

“It was a time when you really feel part of the squad. You feel these guys look at me as a player, not just filling numbers. That is something you will have in your memory banks forever.

“Afterwards Sean (Cronin) was saying that if he had been there, it would have been a different story! I would like to think if he was playing I would have had to scan the field until I found him and hit him a sneaky one if I had to!”

NC: “I think I was up there at the Sportsground in 2008 the previous time Munster had lost, probably shouting for Sean who was playing with Connacht that day.

“It seems like a long time ago now. I was 15. My other brother was the Connacht mascot at one stage. It’s crazy how things move on so quickly. I remember watching the O’Connells, the O’Callaghans, these guys playing and now I am training with them. I was over at the two Heineken Cup finals in 2006 and 2008 as a fan.

“We looked over at the same time - I think when Connacht scored their first try - and we both gave each other a wink, a look of, ‘I know you, but you are on the other side of the fence today’.”

NC: “My brother Sean was home over Christmas. He had the week off. It was the first time he came home that he could give me advice on aspects of the professional game he was involved with. He hadn’t played club in a good few years, so he probably felt he didn’t want to tell me too much in recent years. This Christmas, he was able to give some sort of advice because I was involved with Munster.

“It would have been bragging rights for me if he had been involved with Leinster that day against Munster! We played Shannon the week before with Garryowen when we won and Liam was on the bench. I had the bragging rights there already!”

NC: “The competition with myself and (Munster Academy member) Jamie (Glynn) for game time at Garryowen is great. It drives both of us on. You get the best out of yourself when someone is pushing you. That’s important. It’s something that’s needed in every club. You find yourself doing an extra gym session or going out to the pitch half an hour early to do more box kicking practice.”

Where The Future Lies

NC: “I am not too sure what the future holds for me. I have three months to complete in college and I will be a qualified secondary school teacher. I would love to be involved in a professional rugby set-up full-time. That would help you develop. It also helps the club too. I am getting used to the Munster set-up, to the style of how the team plays, gym session in the morning, field session, skills, diet. They made me feel very welcome.

“Hopefully, if they think I have improved for the past number of weeks, there may be something at the end of it for me. That would be great.”