Busy start to the new year for local athletes 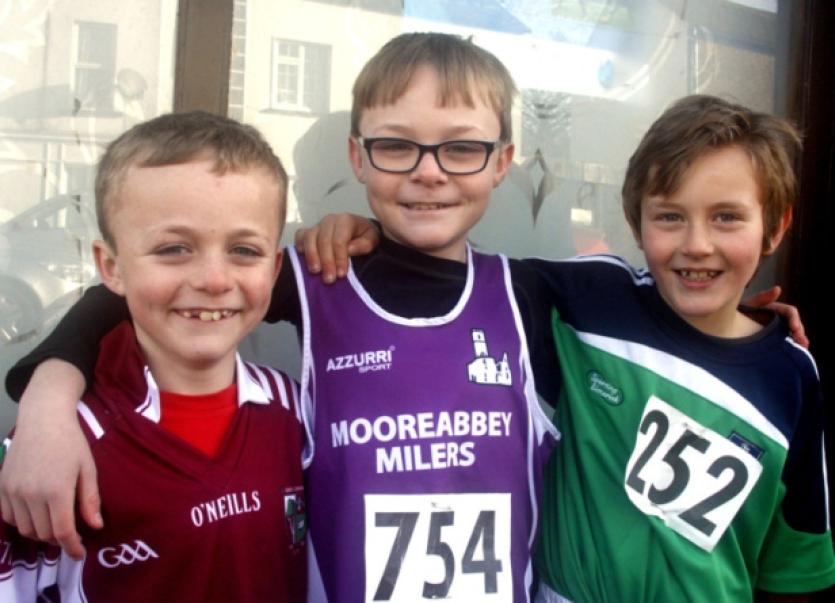 Verena Tarpey rounds up all the local athletic news from the last week.

Verena Tarpey rounds up all the local athletic news from the last week.

Again, a good representation from Limerick clubs including Laura Frawley and Emma Moroney of St Mary’s Limerick, Sarah Hosey of Limerick AC, Sarah Butler and Maria Campbell of Dooneen AC, Molly Hyland and Amelia Noonan of Sunhill. Sarah Hosey was 2nd in the 800 metres, Laura Frawley won the high jump and long jump and was 2nd in the shot putt. The boys U-12 also ran well and featured Geoffrey Joy O’Regan from Sunhill and Darragh O’Sullivan of Dooneen AC. Geoffrey won the high jump was 2nd in the 800 metres and shot putt.

Well done to Ciara Bagnell Keogh of Sunhill who competed in the U16 and Allison Healy of St Mary’s in U17.

Junior Men and Women U-23

A number of Junior men and women travelled to Nenagh as well. In the long jump, Dooneen’s Stephen Utwatse was third – he was also 3rd in the 60 metre dash. Also competing were Owen Alfred, David O’Brien (Dooneen), Jamie Mitchell and Paul Costello of Emerald. Jamie won the 400 metres. In the junior women, Ciara Neville of Emerald won the 60 metre dash, Lauren Ryan of Dooneen in 2nd. Ciara and Lauren also battled out in 200 metres – Ciara won, Lauren was third and Chloe Tobin of Emerald was 5th. Kila Curran of Dooneen put in another great performance and was 5th in 400 metres whilst her clubmate Sinead Roche achieved 5th in 800 metres. Roland Pika of Limerick AC won the long jump in the U23 men’s event. Fantastic results in a competitive field.

Round 1 of the The National Indoor League is taking place this Sunday, 11th January in Athlone. Best of luck to athletes competing in this round . Events Round 1 include the 60m Dash; 60m hurdles; 800m; Long Jump; Pole Vault; Shot Putt. A team bus will leave Raheen Church at 9am on Sunday, January 11. If your event is not on that day, come and support your team mates and also get to try out the Indoor arena. There is space on the bus for supporters, however you must make it know beforehand if you wish to travel. If you have any queries about the league or wish to confirm a place on the bus please contact Dave from Dooneen AC on 086-8770178. Round 2 takes place on January 31 and Events include 200m; 400m; 1,500m; Triple Jump; High Jump

An Bru AC are still looking for athletes to assist in an attempt on the World Record in January. On Sunday, January 11, an attempt will be made to break the world record for the relay marathon of 2 hours, 10 minutes and 50 seconds. Taking place at the University of Limerick track, 105 individual runners will be required covering each lap in an average of 74 seconds in order to beat this record. In order to register for the event, you will need to contact Derek Casey of An Bru running club on 086-0693600. This is also a fundraising opportunity for Cliona Foundation so a small entry fee is also required.

A fit for life leaders training course will take place at the Woodlands Hotel, Adare on January 21 from 7pm to 10pm. Any club members interested should contact their club representative.

Dates which have also been been confirmed for 2015 are as follows – the Munster Senior Cross Country takes place on January 11 at WIT in Waterford. Nenagh Olympic AC open sports for U-13 to U-19 will be held on Sunday, January 11, beginning at 10.30am. Boys and Girls events include Long Jump, High Jump, and track events consisting of 60m, 600m, 800m and 4 x 100 relay. Entry fee of €5 per athlete. The rescheduled Nenagh Olympic AC open sports for the younger athletes from U-9 to U-12 will take place on Saturday, January 31. Munster Senior and Masters Indoors is on January 18 in Nenagh. Milford Care Centre 10K takes place in Castletroy on January 25. Tom Walsh Memorial in Caherconlish has become a great fixture on the circuit now and will take place on February 8 at 2pm. The annual West Limerick Adare 10k will take place on February 22. The Munster Senior and Novice 4 Mile is on March 15 with Munster Masters 4 Mile on March 29.