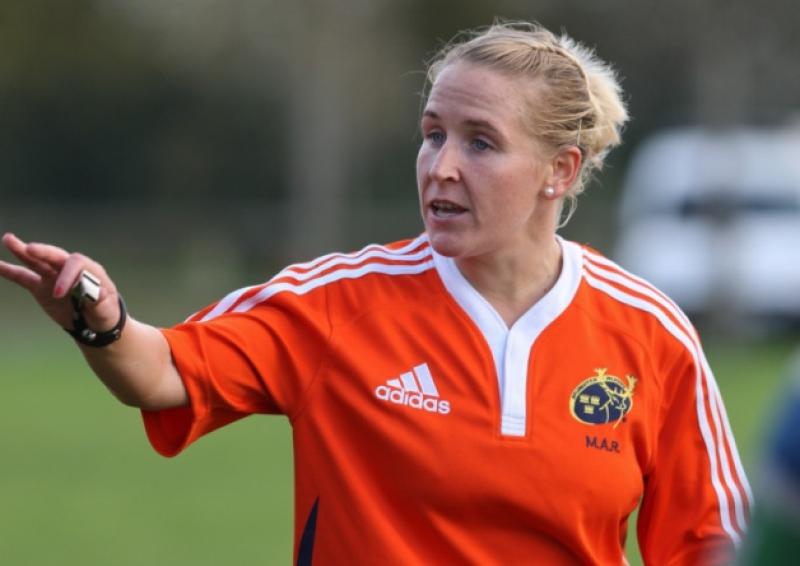 IN July of last year, former Ireland women’s captain and Six Nations Grand Slam winner Joy Neville announced her retirement from rugby, having made 70 appearances for her country over 11 years.

IN July of last year, former Ireland women’s captain and Six Nations Grand Slam winner Joy Neville announced her retirement from rugby, having made 70 appearances for her country over 11 years.

Initially, Limerick woman Neville took a complete break from the game,the exertions of having played the game at the highest level for more than a decade taking their toll.

Thoughts of getting involved in refereeing for the former back-row forward were the furthest thing from her mind. However, 12 months on, all that has changed.

In early December, Neville heads to Dubai to referee in the Dubai Womens 7s. She has already taken charge of two women’s interpros, Connacht v Leinster, and Leinster v Ulster, as well as a women’s All-Ireland semi-final and mens Junior and U-20s games.

Joy Neville: “When I retired from playing, I needed a break from it all. I did some punditing for 6 Nations games and that filled the void. I got to the make some of the away games.

“I dunno if there is a void to be filled any more. As brilliant as it was to be playing for Ireland for 11 years and the girls I was involved with, for me it was the end of an era and I suppose this is a new beginning, a new chapter.

“Peter Fitzgibbon and Dave McHugh approached me and I kinda said to them ‘look, when I commit to something, I commit 100% and I am just after retiring and I did so because the commitment that was expected was big.

“I had given 11 years of commitment, so for me to drop myself into something with an equal level of commitment would be silly.

“I asked for time off to consider it. They gave me that time. I took 6 to 8 months off and then gave it a go.”

DEBUT AS A REFEREE

“The first game I refereed was an U-15 schools friendly between St Munchin’s College and CBC in December of last year. Dave McHugh made me aware that there was a massive amount of potential on offer for a women referee and he felt I had what it took to succeed as a referee.

“I can’t say I enjoyed it - not initially. I found it very hard to view the game from a referee’s perspective rather than a player’s perspective But I stuck at it. I got invited to the European Womens 7s Grand Prix in Moscow and in Brive. I went off and refereed the 7s. It is faster than the 15-a-side game and there is not much of a chance to ref it here. I had the basics. From my years playing, I have that knowledge base. They took a chance on me.”

BEING A WOMAN IN A MALE-DOMINATED PURSUIT

“From one club side, I won’t name names, I had a few elderly men coming up to me, asking me if I had refereed a game before. There were a few comments like that.

“My answers would be very short. I think my facial expressions would have answered that question for them! There are not many women referees about.

“But it is a bit like 9 or 10 years ago when womens rugby hadn’t really arrived. It is same thing with refereeing. The more games I do and hopefully do well, the more they will get used to it.

“I thought I might at J1 or J2 level. I haven’t, maybe they know my history of playing, I dunno. You have to demand a certain respect and authority.

“If you demand it no matter what sex you are, you will gain that respect. I haven’t come across any problems.

“After all, I am not the only woman refereeing games.In North Munster, Pamela Browne, from Shannon, is a referee and there is Wendy (Fitzpatrick) in Co Tipperary.

“And nationally, Helen O’Reilly refereed in the Womens World Cup. She did the semi-final between England and Canada and was unluckily not to get the final.

HOW DID YOU REACT TO REFEREES IN YOUR OWN PLAYING DAYS?

“When I would give away a penalty I would generally put my hands up and say that was me and put my hands up, sorry girls, whatever. On the rare occasion when I felt the wrong decision was made I would nicely question ‘what was that for? I might say did I not role away at the breakdown and when I was told ‘no’ would say ‘grand’. I don’t think I would have given much grief to referees.

“At the end of the day, a decision is a decision and once it is made, you are not going to change their mind.

“What is the point in arguing with it? What goes on in soccer drives me demented, like.

“I remember playing with some players and they had that attitude and it drove me demented. I would often have to tell them to be quiet, stop talking to the referee, that it would go against us in the long run if you don’t hush up.

“The biggest thing for me is the amount of concentration refereeing takes. With rugby, I think, the ball is in play for between 20 and 28 minutes of each game. But with refereeing you have to be on the all the time.”

AMBITIONS AS A REFEREE?

“For me, the goal would be to referee an AIL game, to be honest. I am true believer that you need to be realistic on your goals.

“I would love to see a woman referee, myself or someone else, refereeing in Division 1 of the AIL. Once that happens, a lot more could be possible with regard to women refereeing.

“I did a refereeing course with FIRA. I went to Bucharest last March. I am level two and on the IRB panel going to Dubai to do the 7’s. If I do well there, are possibilities. They are looking for referees for the Olympics in Rio in 2016, that would be a highlight.

“For me, it’s the challenge. It is not just about refereeing a match. It is about managing players and the ability to deal with different situations and scenarios in different ways.

“It is amazing how man management is so important when it comes to refereeing. I am a little intrigued by it, by the whole lot.”