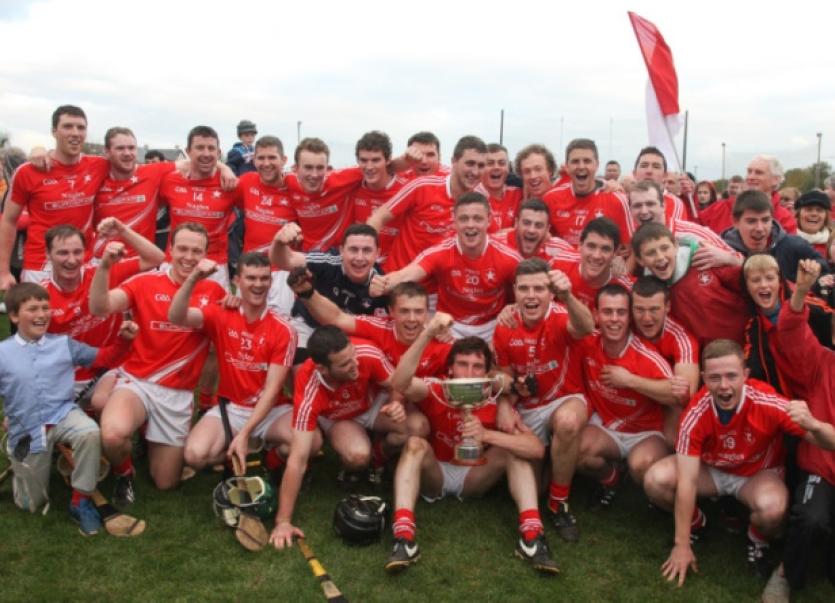 A BIT of luck goes a long way, especially in finals. That was the sentiment from Bruff manager Gary Kirby after his sides hard fought four point win over rivals Croom in the Premier IHC final.

A BIT of luck goes a long way, especially in finals. That was the sentiment from Bruff manager Gary Kirby after his sides hard fought four point win over rivals Croom in the Premier IHC final.

“We got a few lucky breaks,” the Patrickswell man admitted. “They had a line ball overturned (it was initially given as a point before the linesman over-ruled the umpire) and we went straight down and scored a goal.”

Had Tom Carmody’s sideline cut counted, Croom would have led by seven approaching the break. However, after Sean Finn’s injury time goal, the gap was just three at the change of ends.

In fact, had Finn not netted in the second minute of added time, Bruff were in deep trouble.

“We were very nervous in the first half, very jittery,” commented Kirby.

“The ball just would not come up for us.”

Bruff came out fighting in the second period outscoring Croom 1-3 to 0-1 in the first 10 minutes.

“We were able to rectify a few things at half time,” said Kirby who completed his third year in charge of the south Limerick club.

“The last three games we played, against Knockaderry, in the semi-final against Garryspillane and today we were sluggish in the first half,” he added.

Despite this worrying pattern, Kirby insisted that he didn’t have to read the riot act in the dressing room at the break.

“They are a bunch of players that don’t need it to come from us, it comes from within themselves. They knew the talking and shouting needed to stop and that they needed to get behind each other.”

The Patrickswell man would not be drawn into a comment on whether he will stay at the helm for a fourth year and take charge as Bruff return to senior hurling.

“Let’s enjoy tonight,” he smiled. “Look, we have Munster club in two week’s time so let’s concentrate on that,” added ahead of the Provincial semi-final.

Bruff didn’t know it at the final whistle on Saturday, but a trip to Kerry awaits them as Gary Kirby will have to put his wits against former club and county team-mate Ciaran Carey.

Regardless of whom the opponents were, Kirby was impressed with how his team performed in Saturday’s county final and will be looking for repeat performances against the Kerry senior champions.

“Paul Browne’s work-rate was great as well, for a county hurler he really shows his colours with the club and I felt the Madden’s in the half back line (Dean and Cian) set the tone for us.”

For captain Bobby O’Brien the fact that promotion was guaranteed already didn’t take anything away from the final success.

“I’m delighted, we started out in December and days like today make it all worthwhile,” he said after lifting the Michael Fox Cup and becoming the first man to captain a winning team at this grade in Limerick.

O’Brien, like his manager, insisted there was no panic when things went against his side.

“When you play a team with players like (Conor) Allis, (Stephen) Lucey, Razor (Mark O’Riordan) and (Peter) Lawlor, you are never going to dominate for the full 60,” he said.

He added that not much changed in the second half to inspire the fightback.

“We didn’t say a whole pile (at half time) we just kept going and had to push on,” he revealed.

“We had to right the wrongs of the first half and kick on and win it.”

And kick on they did outscoring Croom 1-8 to 0-4 in the second period.

The test now for Bruff is if they can kick on again when they travel to Kerry to play Lixnaw on the weekend of Novemeber 8/9.