How the Munster players rated in the win over Edinburgh 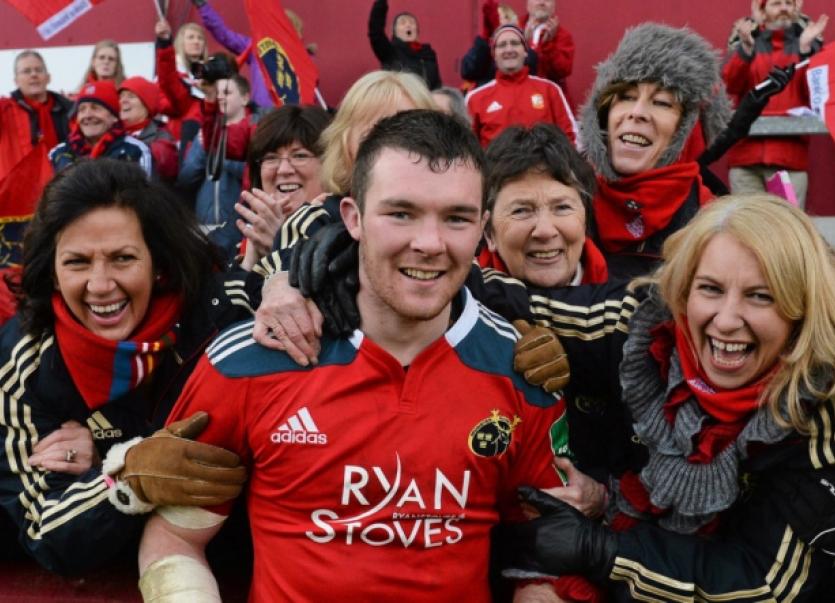 MUNSTER secured a home Heineken Cup quarter-final against French aristocrats Toulouse in April, thanks to a facile 38-6 victory over Edinburgh in their final Heineken Cup pool match at Thomond Park on Sunday.

MUNSTER secured a home Heineken Cup quarter-final against French aristocrats Toulouse in April, thanks to a facile 38-6 victory over Edinburgh in their final Heineken Cup pool match at Thomond Park on Sunday.

Another very solid display from Jones at full-back, who capped his fine showing by bagging the last of Munster’s six tries. Jones will hope to see gametime in Ireland Wolfhounds fixture with England Saxons at Kingsholm this Saturday.

The luckless Earls is due to have a scan on his injured knee this Monday, having picked up an unfortunate injury at the start of the second quarter. Rob Penney was hopeful it is a short-term injury - one to two weeks. Fingers crossed.

Another solid defensive display from Laulala. Threatened with ball in hand, making 9 carries. Will be a key player for Munster during the Six Nations with four PRO12 fixtures donw for decision then.

Assured in defence throughout, marshalling Edinburgh’s centres impressively. Was replaced by JJ Hanrahan after 53 minutes.

Continued his rich vein of form of late with another high class display. Showed terrific vision and neat side step to score Munster’s second try.

Mark his call-up to the extended Ireland squad for upcoming Six Nations and Irish Wolfhounds fixtures by turning in an impressive display in the number 10 jersey. Has put the poor performance against Ulster well and truly behind him over the past two weekends.

A second half tryscorer, Murray controlled the game very effectively throughout. His accurate box kicking is a key weapon in Munster’s arsenal. Hitting the heights ahead of the start of the Six Nations.

Won a couple of penalties at scrum-time, but was also penalised at the set-piece too. Showed up well in the loose, making good yards while carrying.

Made more metres with ball in hand than any other Munster player with 98. Munster also enjoyed an 89% line-out success rate, claiming eight of their nine throws.

The stats show Archer topped Munster’s tackle count with 11. Archer is growing in confidence with every outing.

Top class display from UL-Bohemian clubman Foley. Got through a vast amount of work and was Munster’s main line-out option when Paul O’Connell was replaced.

Another impressive outing from the talismanic second-row who signed a two year contract extension with the IRFU which will keep him at Munster until June 2016. Made 10 tackles and major contribution for James Coughlan’s opening try when superbly claiming the kick-off.

Really growing into the role of captain. Leads by example. Showed a keen eye for the tryline when crossing for the vital bonus point try. Will be a key figure for Ireland in the Six Nations.

Boosted his claims for inclusion in the Irish side for the upcoming Six Nations fixtures with an eye-catching performance. Boasts a huge appetitie for work at the breakdown and is highly effective in that facet of the game,

Man of the Match display from the Munster number eight who scored his side’s opening try. No Munster player made more carries and Coughlan was second on the metres-made chart with 66.

Introduced as a replacement for the unfortunate Earls after just 24 minutes. Capped his return with a second half try. Will be hoping to push his way into the reckoning for gametime in the Six Nations championship.

Replaced James Downey in the 56th minute and was deployed at out-half with Keatley moving to 12. Looked assured in the time he was on the pitch.

Came on for Stephen Archer towards the end of the third quarter. Scrummaged well and was defensively spolid.

Introduced for Dave Kilcoyne on the hour mark. Made an impressive impact. Will be a key player for Munster during the province’s games while the Six Nations championship is being played out.