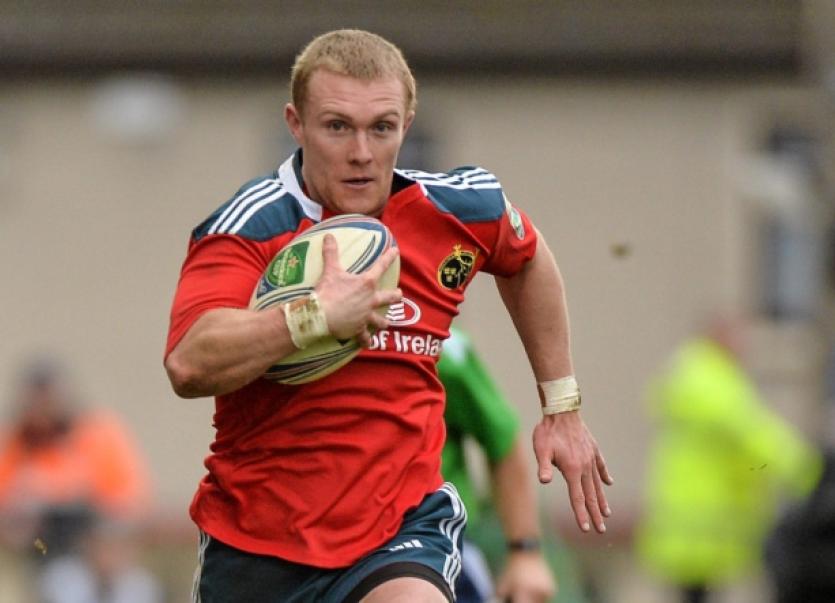 MUNSTER have confirmed that winger Keith Earls - who has committed to the province for another two seasons - sustained ‘some knee ligament damage’ during the course of the province’s Heineken Cup victory over Edinburgh at Thomond Park on Sunday.

MUNSTER have confirmed that winger Keith Earls - who has committed to the province for another two seasons - sustained ‘some knee ligament damage’ during the course of the province’s Heineken Cup victory over Edinburgh at Thomond Park on Sunday.

Earls was forced to leave the game at the end of the first quarter after picking up the unfortunate left knee injury.

The news comes on the day it was announced that Earls has signed a new two year contract with the IRFU which will see him remain at Munster until at least June 2016.

A scan on the injured knee yesterday confirmed that the winger ‘sustained some knee ligament damage’, according to a statement issued by Munster this Tuesday

Earls will meet with a specialist tomorrow, Wednesday, to identify the full prognosis of the injury. Munster Rugby will provide a further update in the coming days. Conformation of ‘some ligament damage’ must make Earls a doubtful starter for Ireland’s opening Six Nations Championship fixtures. Ireland take on Scotland at the Aviva Stadium on Sunday, February 2, while Joe Schmidt’s side host Wales in Dublin six days later.

Commenting on his new two year deal with the IRFU, Earls said: “I am delighted to sign a new IRFU contract and to continue representing my province. This Munster team has shown it has what it takes to compete with the best in Europe and I look forward to playing my role in bringing further success to both Munster and Ireland.”

Earls made his Munster debut against the Ospreys in April 2007. The Munster Rugby academy graduate has made 91 appearances for Munster scoring 26 tries. The 26-year-old made his Ireland debut in the 55-0 win over Canada in Thomond Park in November 2008.The 26 year old has won 39 caps for Ireland scoring 12 tries

Meanwhile, Munster have revealed that Donnacha Ryan underwent exploratory keyhole surgery on his knee last Friday ‘as a precautionary measure’. The procedure re-confirmed that Ryan had suffered ‘no additional injury or damage’ and ‘he will continue with his rehabilitation for the next few weeks as he waits for the knee to settle.’