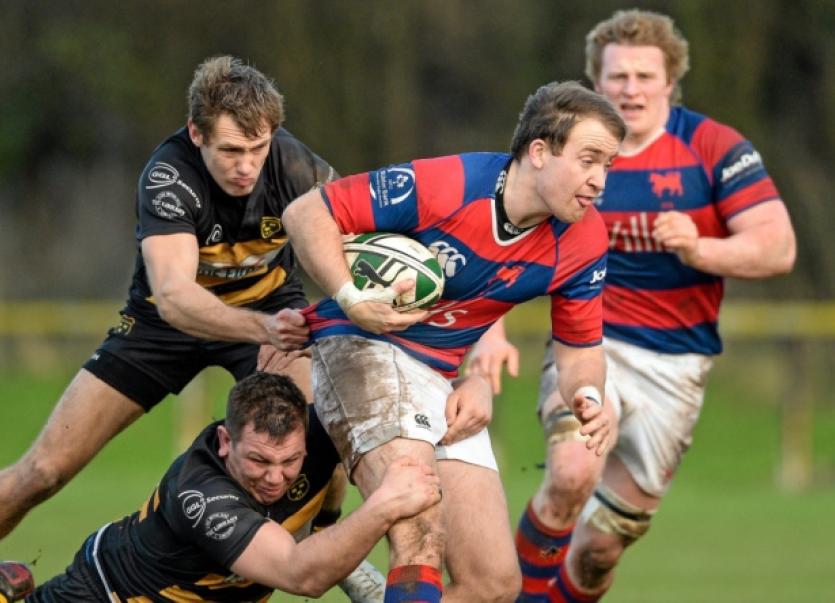 IT was a weekend of contrasting fortunes for Limerick clubs in the All-Ireland League, with the top flight side enduring a frustrating time, while the Division 2A and 2B sides fared significantly better.

IT was a weekend of contrasting fortunes for Limerick clubs in the All-Ireland League, with the top flight side enduring a frustrating time, while the Division 2A and 2B sides fared significantly better.

In Division 1A, Young Munster’s title ambitions suffered a significant blow as the Greenfields side suffered a disappointing 26-9 defeat to impressive top flight leaders Clontarf at a wet and blustery Tom Clifford Park. Munsters’ remained well in the contest when trailing by three points, 6-9, with a quarter of the match remaining. However, ‘Tarf scored three tries in the final 20 minutes, including a penalty try, to pull clear. Fourth-placed Munsters’ now trail the Castle Avenue side by a significant 12 points in the table. Scrum-half Brian Haugh kicked Munsters’ points in this disappointing defeat.

In the same division, Garryowen’s relegation worries grew deeper, despite an improved showing from the ‘light blues’ in a 13-9 defeat to Lansdowne in Dublin. Former Ireland head coach Eddie O’Sullivan has been assisting in the coaching of Garryowen in recent weeks. Alan Gaughan kicked three penalty goals for Garryowen, who did pick up their third losing bonus point of the season. However, the Dooradoyle side remain rooted to the foot of the 1A table, 11 points off second-from-bottom Ballynahinch and 16 points adrift of third-from-bottom St Mary’s College.

In Division 2A, UL-Bohemian fell to a disappointing 15-6 defeat to leaders Terenure College at Annacotty, a result which dented UL-Bohs’ hopes of securing the promotion play-off spot in the Division at the end of the season. Third-placed UL-Bohs’ slipped 15 points behind leader Terenure as a result of this defeat against the unbeaten Dubliners, while the Annacotty side now trail second-placed Corinthians by six points. The second placed side at the end of the regular season will secure the promotion play off spot on offer in 1B. Terenure’s three tries were scored by former Young Munster back-row James O’Neill.

There was huge frustration for Shannon who led Blackrock College 10-3 at Stradbrook before the game was abandoned due to a lengthy stoppage following an injury to a player. Shannon had Munster players, Paddy Butler and Duncan Casey in their starting line-up for the game.

In Division 2A, Bruff record their first win of the campaign, a gritty 26-15 away success over Naas. The win moves Bruff to within four points of second-from-bottom Old Crescent who had to be satisfied with taking a losing bonus point from their 9-3 away defeat to Bective Rangers.

Both Limerick sides in Division 2B recorded excellent wins.

Fourth-placed Thomond remain firmly in the promtion race after recording an impressive 16-3 home win over Greystones, while Richmond picked up four valuable points on the road, thanks to a deserved 13-7 win at Sunday’ Well. Ger Finucane and Brendan Guilfoyle scored the Thomond tries in their sixth win in nine games.

Eoin Hanley bagged the Richmond try in their Munster derby win over the ‘Well, while Wayne Murphy landed eight points with the boot.