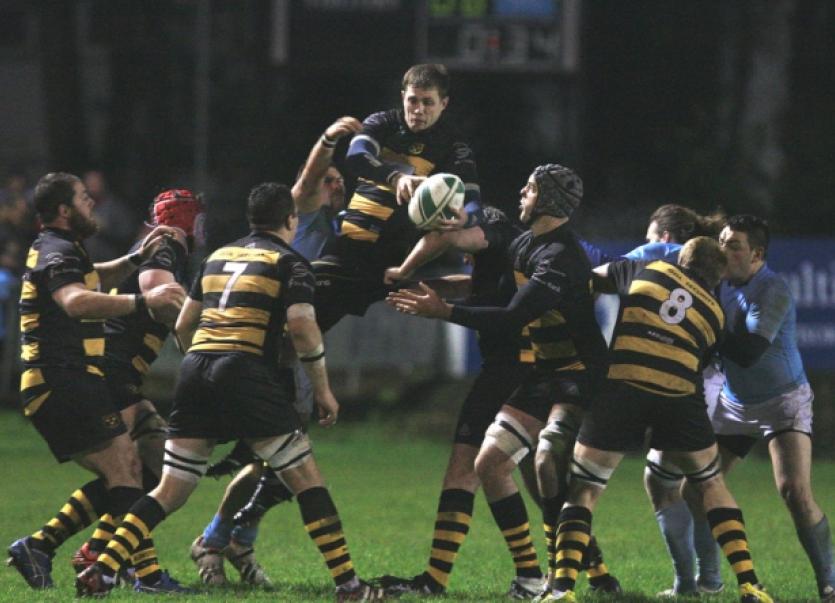 YOUNG Munster remain fifth place in the AIL Division 1A table after recording a nail-biting 9-8 win over winless Garryowen at Dooradoyle on Friday night.

YOUNG Munster remain fifth place in the AIL Division 1A table after recording a nail-biting 9-8 win over winless Garryowen at Dooradoyle on Friday night.

Basement side Garryowen created sufficient openings in the second half to have recorded their first win, including two late penalty awards, but the ‘light blues’ failed to convert either.

Young Munster were down to 14, following the sin-binning of out-half Kolio Hifo, when the try was scored and the visitors winger Jamie McGarry picked up an unfortunate injury in the lead up to it which resulted in him being taken off the pitch.

For Garryowen this was the second week running they had agonisingly missed out on finally recording their first win of the campaign.

To say the ‘light blues’ AIL away date with second-from-bottom Ballynahinch on Saturday, November 23 is important is putting it mildly. Before that there’s the none-too-small matter of a ODM Munster Senior Cup semi-final showdown with Shannon at Coonagh on Saturday next.

Munsters’ will be relieved to have won a highly competitive contest, with the high number of players on both sides, who were playing against their old club, adding to the edge.

The win, after a run of two defeats, lifted Munsters’ to within three points of 1A leaders Clontarf.

Meanwhile, in the weekend’s second big derby, Shannon recorded a 13-9 win over UL-Bohemian in Division 1B at Coonagh on Saturday.

Shannon’s second win of the campaign has seen the Parish side remain sixth in the table, while UL-Bohs occupy fourth spot.

With John Shine prominent at number eight and out-half Gearoid Lyons’ positional kicking keeping Bohs on the back-foot, Shannon enjoyed most of the early possession. Tadhg Bennett was off target with two early penalty chances but when the visiting pack was penalised at their own put-in on 33 minutes, Bennett nailed the strike to put Shannon deservedly into a 3-0 lead. UL Bohemian upped the tempo of their attack from the re-start, full-back David Johnston making a fine break, and Robbie Burke levelled the tie from a close-in penalty.

Shannon finished the half strongly and almost on the half-time whistle, Keith White charged down an attempted clearance close to the Bohs line. Right wing Greg O’Shea reacted quickest, snapping up the loose ball to score what was to be the only try of the game and Tadhg Bennett landed the difficult conversion.

A third successful kick from Bennett 11 minutes into the second half, pushed the home side 13-3 in front but Bohs had plenty left in the tank, replying with successive penalties from the boot of Robbie Burke to set up a nail-biting final ten minutes. The red robins, for whom second-row Eoin Sweeney, number eight Jack O’Donoghue and hooker Kevin O’Byrne were outstanding, could have won it at the death, the final pass going astray close to the Shannon line following a period of patient possession.

This was a good display by the Coonagh side and they will be hoping that their policy of blending youth with experience is beginning to pay dividends.