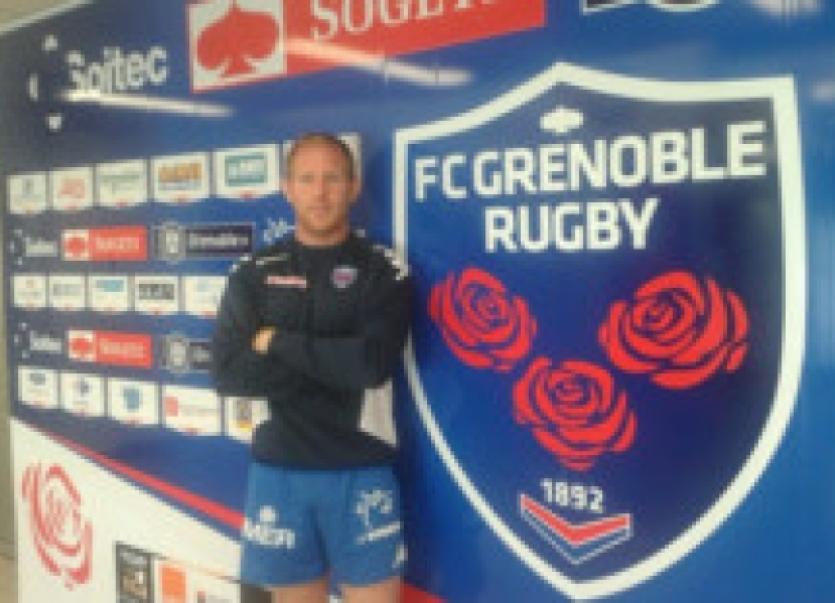 IN recent years, the arrival of September heralded the start of the Limerick Charity Cup for Mike Prendergast.

IN recent years, the arrival of September heralded the start of the Limerick Charity Cup for Mike Prendergast.

This weekend the former Munster scrum-half found himself pitting his wits against Heineken Cup champions Toulon in his new home in Grenoble in the rarifed atmosphere of the French Top 14.

Prendergast is skills coach with Grenoble - the club based at the foot of the Alps - which stunned Johnny Wilkinson’s Toulon 28-26 on Saturday evening.

After spending four seasons as Director of Rugby with Young Munster, Prendergast moved to Grenoble where he joined former Irish hooker Bernard Jackman, the club’s defence coach, in France this summer.

Prendergast told Leader Sport: “I arrived over here at the start of June for pre-season. In fact we were the earliest club back because last year, Grenoble had a really strong start to the season having coming up from Pro D2, but unfortunately they didn’t finish strong.

“There was a feeling we would have to change things up, be more durable during the season. We had a week of meetings at the start of June.

“I was fortunate to have Bernard Jackman to translate them because I didn’t have enough French. Bernard has been unbelievably helpful since I arrived

“Then it was into pre-season on the Monday morning at the deep end and it’s a case of sink or swim.

“We had to start our training quite early - 8am because of the heat. It got very, very warm here - was up to 40 degrees at one stage during the summer. But you do get used to it after three or four weeks.

“But it gets really, really cold in the winter. That’s the thing. I hear more about it. We are beside the Alps, so it will get very, very cold for four or five months. That will be even harder to adjust to. Training can have to be moved. Travel can be disrupted. That is down the road. It has been a good experience.

“I have settled quite well and have moved into a nice house about two weeks ago.

“My fiancee Shonagh and my little girl Emma, who is eight, arrive this week after three months. Emma is starting in an all-French speaking school next week.”

Irish interest in the French Top 14 has never been as high. Ronan O’Gara’s decision to take up a kicking coach role with big-spending Parisians Racing Metro and Jonny Sexton’s decision to join the club from Leinster has heightened the competition’s profile here.

O’Gara and Prendergast met at Paul O’Connell’s wedding in Auch, France during the summer.

The banter between the two former Munster layers is sure to crank up a gear closer to the Top 14 meetings of Grenoble and Racing Metro.

Prendergast said: “Ronan (O’Gara) and I keep in contact. We spoke a good bit over the summer. He came over a month later. He was on to me about what was in front of him.

“Rog has quite good French, a lot of French. He is probably fluent by now. Rugby French comes to you quite quickly, coaching and on the pitch phrases. It is the conversation which is more difficult.

“There will be a few text messages flying between myself and Rog before the match with Racing. I am sure it will be the same between Birch (Bernard Jackman and Jonny Sexton. We have that Munster/Leinster link.”

While Grenoble would love to be challenging for a European spot come the end of the season, maintaining their Top 14 status might prove a more realistic ambition.

Prendergast said: “In an ideal world, we would love to finish top six and try and get into Europe, try and attract a few more stars into the club.

“Being realistic about it, given we are only in our second year in Top 14, maintaining our top flight status would be a serious achievement as well, when you see the team in among us. You have Brive and Oyonnax who beat Clermont last weekend.”

Prendergast is relishing the challenge and is hoping his stay at Grenoble will be extended beyond the end of the season.

Prendergast said: “It is one-year contract. I don’t have the stability of a two-year or three-year contract. The way I look at it, I am concentrating on the here and now, keeping the head down and working hard. I am gaining a lot of experience. We have eight or nine different nationalities here, between coaches and players.

“Hopefully, I will get another couple of years here which is something I would like. It is a big move to come for a year and the rugby season goes so quick.”