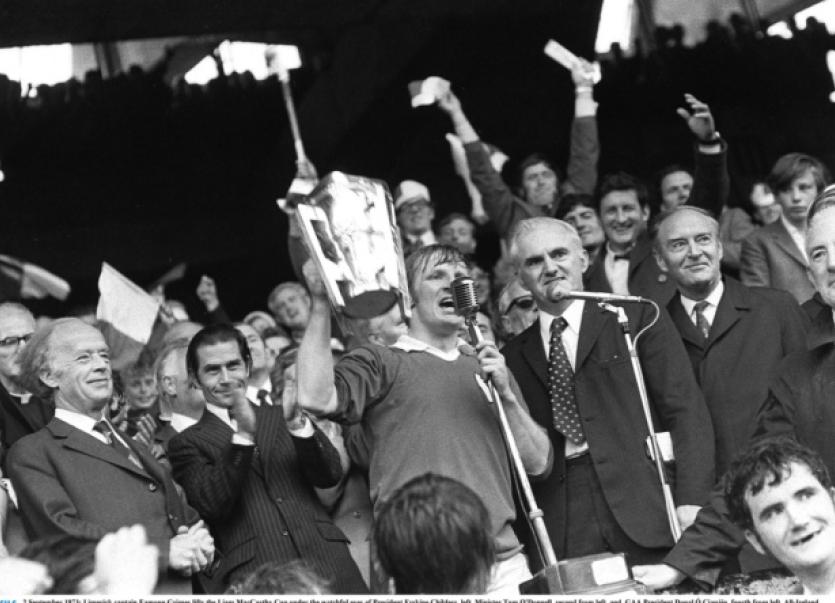 On the eve of this year’s All Ireland hurling final, Jerome O’Connell looks back on Limerick’s last national success in 1973.

On the eve of this year’s All Ireland hurling final, Jerome O’Connell looks back on Limerick’s last national success in 1973.

THE tattered cover of the video box tells its own story.

The video of ‘that day’ in 1973 remains one of the most guarded prizes in the household.

And, so it is across Limerick city and county as hurling followers cling onto the prized memories of when Liam McCarthy last returned to the Treaty City.

Almost annually the video makes an appearance and as another year passes it looks like it’s time to ensure the legacy remains and thus the video must become a DVD or should it be BlueRay.

Even the picture above brings a smile to the face. Like oh so many Limerick GAA followers I’m not old enough to have been in Croke Park to see Eamon Grimes end a 33-year wait for Limerick’s seventh All-Ireland senior hurling title.

But, be it in print or on the walls of many hostelries across Limerick pictures of the first Sunday in September continue to catch the eye.

Bennis, Grimes, McKenna, Rea, Cregan, etc, etc.... the names roll off the tongue. This week 40 years ago they wrote themselves into Limerick sporting immortality when they beat Kilkenny in the All Ireland final.

The reception afforded to them as they were introduced to the crowd in Staker Wallace GAA grounds earlier this Summer was a fitting tribute to the men of ‘73. As much as we wish for new heroes, Limerick will always hold a special place for the men that lowered the colours of Kilkenny.

All had hoped that this weekend would write another glorious chapter in the history of Limerick GAA.

That was not to be.

But that should not stop supporters from looking back fondly on ‘73.

Of course it is a cause of some pain that the wait for success stretches into a 41st year. My colleague Aine Fitzgerald relived the glory days with members of the team this week.

Their recollections are a most enjoyable read and copper fastens their stature within Limerick hurling.

They are certainly not to blame for the famine that now stretches into another year.

Indeed so many of them continue to give back to Limerick hurling and it is certainly their most earnest wish that sooner rather than later another Limerick senior hurling captain climbs back up the steps of the Hogan Stand to be greeted by Liam McCarthy.