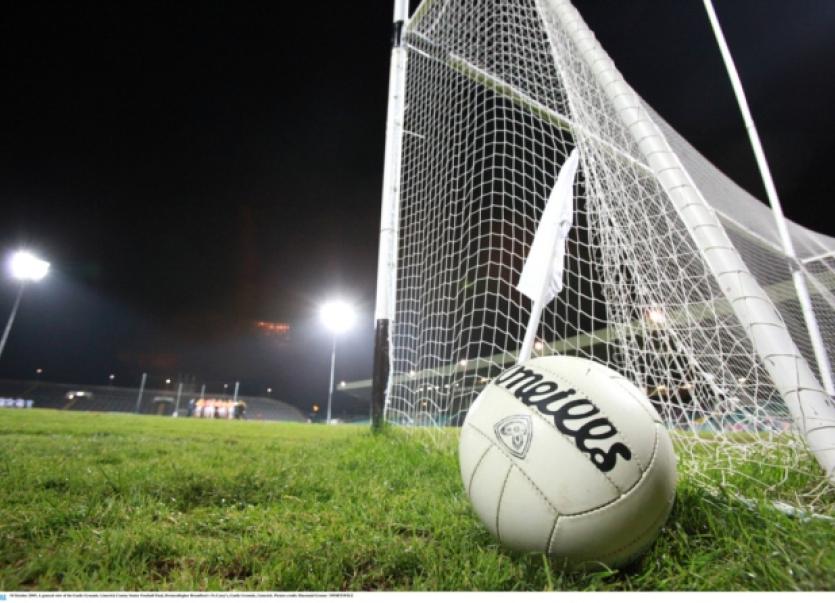 THERE was a full round of games in the Limerick SFC over the weekend where there were three draws, two shock results adnd an easy win for county champions Dromcollogher-Broadford.

THERE was a full round of games in the Limerick SFC over the weekend where there were three draws, two shock results adnd an easy win for county champions Dromcollogher-Broadford.

Monaleen came from behind to earn a draw with intermediate champions Pallasgreen in Caherconlish. Goals from Seamus Mulcahy and Aidan Shanahan had helped Pallas into a big lead early in the second half but Monaleen fought back and a late point from defender Colm Moran earned a 0-12 to 2-6 win.

St Patrick’s needed an injury-time free from Eoin Hanrahan to snatch a dramatic draw against Adare.

When Adare’s Willie Griffin goaled from the penalty spot with nine minutes to play, the Rhebogue side looked destined for a second successive defeat.

But late frees from John Mullane and Hanrahan secured the draw, 1-10 each.

St Patrick’s had led 1-4 to 0-4 at half time after playing against the wind.

The goal came in the early minutes from Gearoid Hegarty. Also in this group St Kierans were 2-5 to 2-3 winners over Newcastle West.

Newcastle West had goals from Sean Browne and Jamie Lee to lead 2-0 to 0-3 at half time. But second half goals from Jack Hartnett and a Sean McSweeney penalty kept St Kierans on an unbeaten run at the top of the table.

Also unbeaten are champions Dromcollogher-Broadford at the other of the other group.

They led 0-5 to 0-4 at half time against Mountcollins. But a goal from Killian Phair set them on their way to victory with Micheal Reidy chipping in with three points.

In Hospital, Ballylanders and Galbally played out the third draw of the weekend when they finished 0-10 each. Galbally led 0-6 to 0-2 at half time with Darren Sheedy dominating their scoring.

But late points from Eoin Walsh and Danny Frewen secured the draw. Walsh ended with four points from play, while Frewen had three.

Also in this group, Ballysteen were 1-6 to 0-6 winners over Fr Caseys of Abbeyfeale.

The winners were 1-2 to 0-3 up at half time. Declan Nash got the all-important goal for the winners.

Fr Caseys hit back with points from Derry O’Connor and John Lane but they couldn’t get the necessary goal as Danny Neville points maintained the Ballysteen advantage.