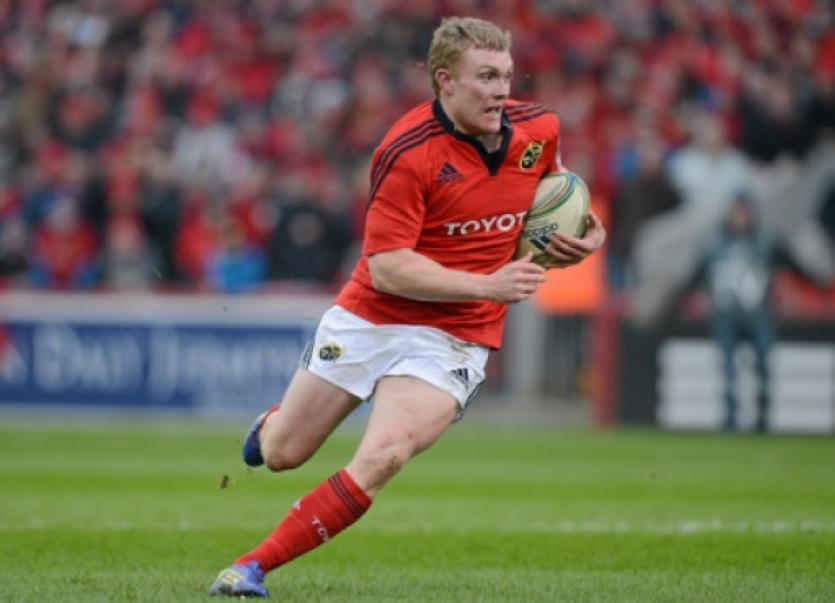 MUNSTER are sweating over the fitness of wingers Doug Howlett and Keith Earls and second row Donncha O’Callaghan ahead of Saturday week’s big Heineken Cup semi-final showdown with Clermont Auvergne in Montpellier.

MUNSTER are sweating over the fitness of wingers Doug Howlett and Keith Earls and second row Donncha O’Callaghan ahead of Saturday week’s big Heineken Cup semi-final showdown with Clermont Auvergne in Montpellier.

Howlett damaged a shoulder in the act of reaching for the line in scoring a try in Munster’s defeat to the Glasgow Warriors, while Earls suffered a shoulder injury while playing for Ireland in last months Six Nations clash with Italy

Lock O’Callaghan picked up a knee injury in Munster’s weekend defeat to Leinster.

Head coach, Rob Penney said: “Earlsie (Keith Earls) is making progress. We were hopeful he would have been available (for Leinster) last weekend, but he just didn’t come through training. He’s close but we’ll know more at the end of the week.

Donncha O’Callaghan is never injured and for him to sustain the injury he’s got is very frustrating. We’ll get another report by Wednesday or Thursday.”

Munster coach, Rob Penney said he was always confident Paul O’Connell would not be cited over the incident involving Dave Kearney during the course of Saturday’s defeat to Leinster. O’Connell appeared to accidentally kick Kearney’s head while attempting to fly kick the ball away. After reviewing video footage of the incident, the citing commissioner, Eddie Walsh, decided the second row did not have a case to answer.

Rob Penney said: “It was one of those incidences. Footie is a dynamic game and you know from our perspective (there was) absolutely nothing to answer for.

“You slow things down and you look in real detail and they always look worse.

“Numerous incidents, if you take them in isolation and slow them right down and this is one of those ones where there is nothing really to be concerned about.”

Coach Penney is set to ring the changes to his starting team for the clash with the Dragons as Munster come off the back of two high intensity fixtures with ‘Quins and Leinster and start to turn their focus to Saturday week’s European semi-final with Clermont.

Penney said: “Yeah, there’ll have to be some changes (for the Dragons fixture).

“You can’t expect to keep battering the same group of players and expect them to perform in a fortnight’s time so there will be some changes which is really great for some people who haven’t had much of an opportunity to get the jersey on.”

Munster slim hopes of making the PRO12 play-offs were ended by Saturday’s defeat to Leinster.