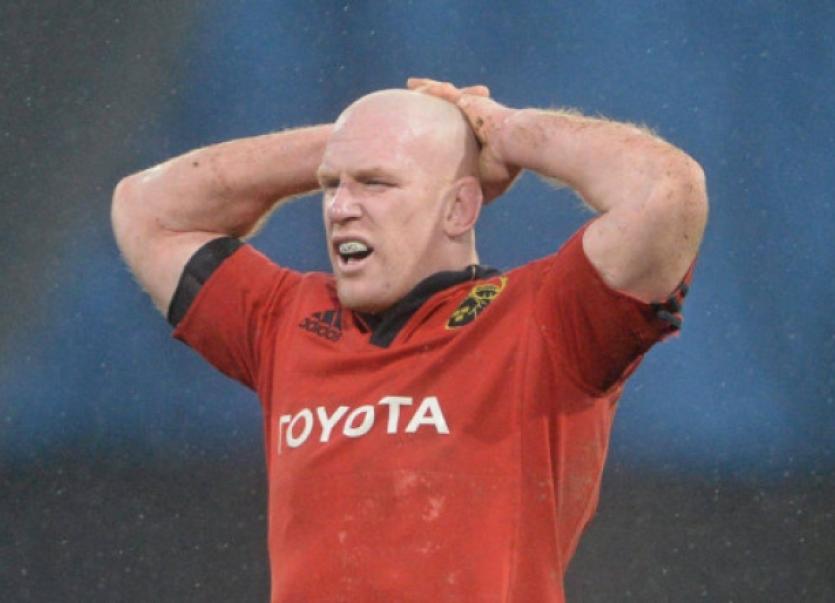 MUNSTER second-row Paul O’Connell has revealed his relief at not being cited in the wake of the province’s RaboDirect pro12 clash with Leinster on Saturday.

MUNSTER second-row Paul O’Connell has revealed his relief at not being cited in the wake of the province’s RaboDirect pro12 clash with Leinster on Saturday.

O’Connell appeared to accidentally kick Leinster winger Dave Kearney in the head mid-way through the second half when the Munster captain made an attempt to fly-hack the ball away.

Match referee Nigel Owens did not penalise O’Connell at the time of the incident and on Monday it was confirmed that match citing commissioner Eddie Walsh had chosen not to cite the influential Munster second row.

Speaking at a City of Culture Business Breakfast yesterday O’Connell said while he didn’t think he had a case to answer following the incident, he was delighted to hear confirmation of it.

O’Connell explained: “Straight after the game I didn’t think I would have a case to answer because I knew in my own head what had happened. But it was only when I looked at it in video that I saw how bad it looked and got a bit worried.

“You are just worried that will get to people. Thanks be to God there was no citing. It would have been very frustrating at this time of year.

“I would have known in my own head that I didn’t mean anything. It was a great to play in – a really tough derby match.

“It would have been disappointing if it had happened so I was delighted when there was no case to hear.”

Later yesterday, Leinster coach Joe Schmidt belatedly became involved in a debate which has proven highly divisive. The man who is now the firm favourite to succeed Declan Kidney as Ireland coach did not explicity criticise O’Connell’s actions, but his comments have added fuel to the fire. Stating that Dave Kearney “had every right to be where he was”, he added: “I’m just surprised. I think all of us understand the quality of Paul O’Connell. I think he’s a superb player. I think he’s a top-quality bloke.

“It’s impossible for us to rule on intent. What we can see is an action that has had 90,000 hits on YouTube. That mothers of kids that we want to play the game are watching.

“And effectively what the citing commissioner has deemed that what happened is acceptable on a rugby field. That it didn’t constitute a red card. I just think we’re getting into dangerous territory when that’s our baseline. Post-game: that’s not my domain. It was left to Eddie Walsh, the citing commissioner, to determine whether or not it was a citing offence.