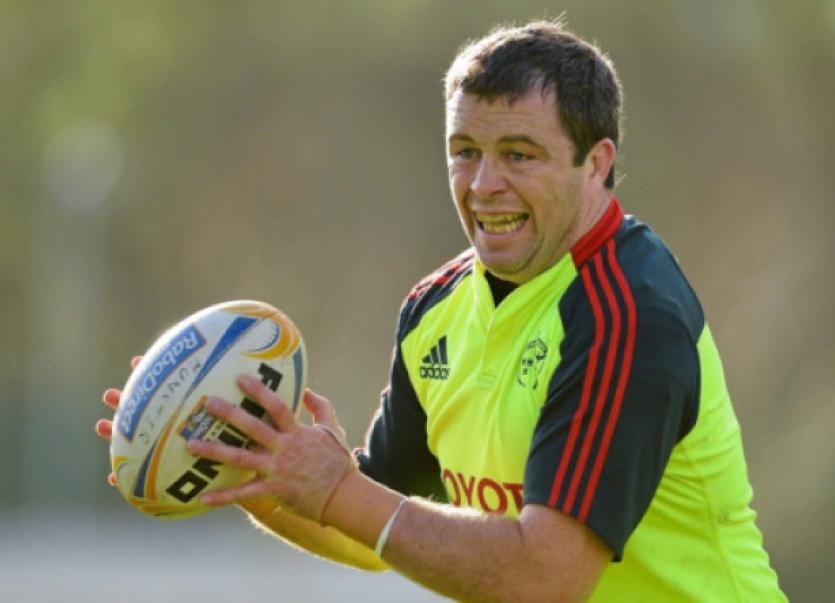 Marcus Horan reflects on his Munster career with Colm Kinsella

Marcus Horan reflects on his Munster career with Colm Kinsella

IT’S shortly before 5pm on a grey, dank April evening and Marcus Horan is leaning up against the wall, outside the visitors’ dressing room.

Nearby, two sets of rugby players are milling around, sharing banter on another big derby day in Limerick. It’s just over an hour and a half to kick-off at Thomond Park, the countdown is on in earnest to the latest heavyweight meeting of Munster and Leinster in the PRO12.

But Munster’s most-capped forward is not at Thomond Park. Instead, he is across the city at Tom Clifford Park, kitted out in the black and blue of Shannon, 45 minutes after the final whistle has sounded on their AIL match with Young Munster.

The paying public here number a modest couple of hundred grassroots supporters, rather than the 23,000 who lap up the action across town as two Irish tribes go to war.

Two days earlier, Horan announced his decision to retire from professional rugby at the end of this season. In the past, several Munster players have been afforded high profile send-offs, mainly a chance for the province’s fans to express their gratitude to the players for their years of service, prior to the province’s final home fixture of the season.

That opportunity hasn’t been afforded to the supporters in Horan’s case.

Ironically, it all began for Horan at Munster with an interprovincial clash against Leinster in August 1999.

Fourteen seasons later, he is Munster’s most capped forward with 224 appearances for the province and also boasts 67 Irish caps for good measure.

But this term has been a frustrating one for the 35-year-old who has made just three starts for Munster and seven more off the replacements bench.

There was the possibility of Horan playing on with Munster next season, but the lack of regular game time at provincial level this term has convinced him to hang up his boots at the end of this season.

Horan has also ruled out the possibility of lining out for relegation-threatened Shannon beyond Saturday’s mammoth relegation clash with champions Lansdowne.

Not one for fanfare, the lack of a high profile farewell in Munster’s final home game of the season against Leinster at the weekend didn’t upset the dynamic loosehead prop.

Horan said: “I am done, finished completely with rugby at the end of the season.

“I always want to get some enjoyment from it and I am not enjoying it at the moment. That probably made it easier for me to say goodbye to it.

“It is rare that lads get a big send off. Some guys have been forced out of the game with injury. In that sense I am lucky.

“It is disappointing when you put a massive in training wise. I think you have to work that bit harder when you get a bit older.

“Not getting chances (to play) is hugely disappointing and hugely frustrating. There was no point in me trying to do another year. I felt I was banging my head against the wall. It is time to move on.

“There would have been an opportunity to be involved next season, I suppose, if I had decided to do so. But it wasn’t right for me. You get a vibe about things and that is just the way it is.

“I have made my decision now and I am happy with it. It is a weight off my shoulders as well. I am looking forward to moving on to better things.

While Peter Stringer – just three months younger than Horan – has opted to continue his playing career cross-channel with Bath after his game time with Munster became limited, Horan revealed that the opportunity to move abroad to prolong his career didn’t appeal to him.

“Moving to another club abroad isn’t something I would consider,” Horan said.

“I have a young family and Munster is my home to be honest. I mean that in a rugby sense as well.

“I didn’t want to be forced out of the province either. I have had a good innings here.

I’ve had a great career, enjoyed every minute of it and I’m proud of what I’ve achieved.

“I’d like to thank all those involved for helping me along the way, be it at club provincial or international level.

“I couldn’t have achieved what I did without the support of my family and I am grateful to them beyond words. I’m looking forward now to being able to spend a bit more time with them. Hopefully give a little bit back.

“I’d have to mention the marvellous Munster supporters whose unwavering loyalty down the years was another huge factor in making my career so memorable. Fabulous people.”

Horan cut his teeth with Shannon in the AIL and last weekend, he lined out at loosehead prop in the Parish side’s defeat to Young Munster.

This weekend, Shannon’s survival in the top flight will be on the line with champions Lansdowne visit Coonagh.

Horan said: “The Young Munster match was a very frustrating game for us. You could see the passion there, a typical Limerick derby. Munsters were well up for it. They made a fantastic effort.

“They showed the competition a lot of respect by showing they weren’t just going to roll over. They were deserving of their victory.

“It is an unusual League. Everyone is capable of beating everyone else.

“There is no bigger challenge for us. We are in a spot of bother.

“We have the champions coming down to play us at home.

“There is no better motivation there for the boys. A lot of guys are hurting after the Munsters’ defeat. We need to turn things into a positive and get guys up for it.

“I am in a bit of limbo at the moment. I am hanging in with Shannon. The motivation for me is to keep the club up. If we can do it, it will be something special.

“From being involved with Shannon over the past few weeks, I thought we could have been safe by now. If we are being hard on ourselves, we have let a lot of games go.

“That is disappointing, but hopefully it won’t come back and bite us. That is the challenge for next week. Hopefully, we will be right for it.”

Shannon head coach, James Hickey has been delighted to be able to call upon Horan’s services this season.

Hickey said: “There will be columns and columns written about Marcus over the coming weeks and months and every inch of it is deserved.

“I remember him coming in to Shannon as an 18-year-old and seeing him play back then.

“He deserves every accolade and credit he gets The thing about Marcus is that he is a humble guy. He communicates very well with the other players when he comes to training.

“He is very articulate. It doesn’t matter if he is talking to the big guys in the team or the guys trying to breakthrough into the side, he always has words of wisdom for them.

“He is going to be a massive loss, not just for Shannon, but for Munster and Ireland. He deserves to be classed as one of the legends of the game.”