Munster’s Francis Saili: ‘I’m down, but I’m never out!’ 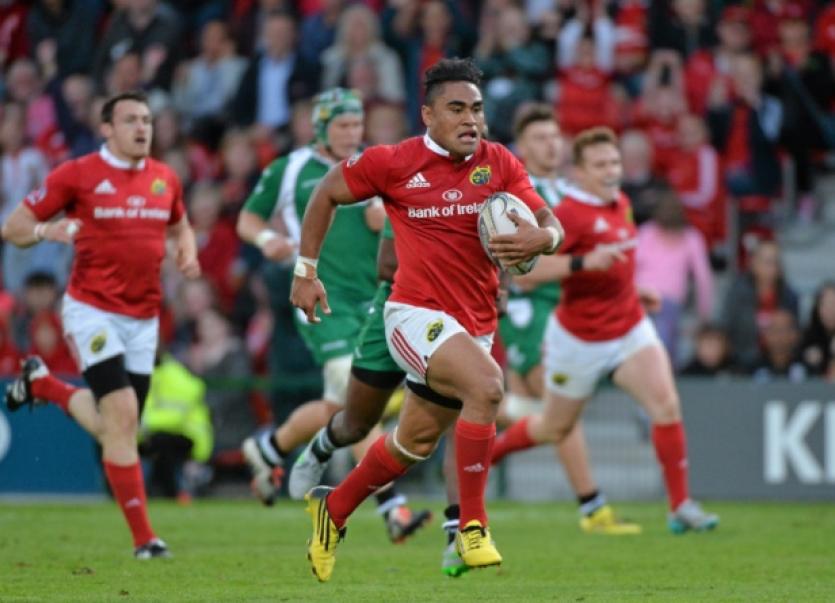 MUNSTER confirmed that their All-Black centre Francis Saili sustained concussion in Friday night’s win over London Irish and will undergo further tests under the supervision of the province’s medical team in the coming days.

MUNSTER confirmed that their All-Black centre Francis Saili sustained concussion in Friday night’s win over London Irish and will undergo further tests under the supervision of the province’s medical team in the coming days.

Saili, who had scored a try on his first start for the province, was stretchered off the field in the 65th minute of the game with a possible head/neck injury which caused the fixture to be delayed for 15 minutes.

Saili was kept overnight in the Cork University Hospital for observation purposes on Friday before being allowed to return home to Limerick the following day.

“The centre will undergo further tests under the supervision of the Munster medical team in the coming days.”

Anthony Foley said: “We’re extremely pleased to see Francis make a return home. Our priority now is to give him the care and time he needs to get right.”

Saili in an Instagram message on Saturday wrote: “I’m down, but I’m never out! Thank you everyone for the kind messages and support, feeling a bit better this morning (Saturday). Will take it easy, but I can’t wait to get back into action with my Irish @munster_rugby brothers!”

Munster face Benetton Treviso in their opening Guinness PRO12 fixture of the new season at Musgrave Park on Saturday, 7.45pm.

Foley said: “Tommy is going to be out for a period of time. We don’t know the exact length of it yet because they are still trying to assess the damage that was done. He’s on non-weight bearing at the moment and will be for the next four weeks.

“That’s even a month before he starts his rehab. We’re probably not going to see him this side of Christmas. It’s devastating for him to miss out on a World Cup after playing so well and then to miss out again for a period of time in a season...Rugby players want to play, they don’t want to be injured and unfortunately that’s the situation.”

Foley admitted he has selection headaches ahead of Saturday’s PRO12 opener against Treviso in Cork.

“That’s what we have such a good squad and depth and hopefully we can take what happened tonight forward for the vast majority of the game into Treviso, which again, is going to be a massive physical contest.”