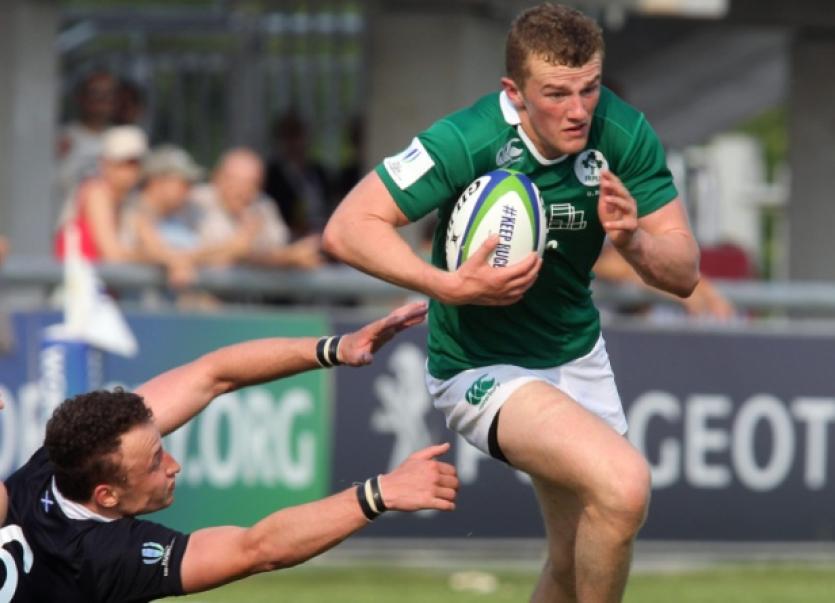 SHANNON and Munster winger Stephen Fitzgerald scored a brace of tries in Ireland U20s’ 17-9 win over Scotland U20s which earned a seventh-placed finish overall in this year’s World Rugby U-20 Championship.

SHANNON and Munster winger Stephen Fitzgerald scored a brace of tries in Ireland U20s’ 17-9 win over Scotland U20s which earned a seventh-placed finish overall in this year’s World Rugby U-20 Championship.

Nigel Carolan’s Irish U-20s fought hard for their second victory in three meetings with the Scots this season, as they bounced back from their recent defeats to New Zealand and Wales to win their play-off clash in Italy on Saturday.

The Munster duo of Liam O’Connor and Jack Cullen also made appearances from the bench as Ireland completed their World Rugby U-20 Championship with a win.

Meanwhile, the Ireland Men’s Sevens squad got the job done in emphatic fashion in Zagreb, securing the Rugby Europe Division B title with an unblemished record of six wins, 384 points and 60 tries scored and none conceded.

Ireland added the Division B silverware to their Division C success from two weeks ago, and in the process qualified for the European Olympic Repechage tournament which takes place in Lisbon, Portugal on July 18-19.

The Ireland squad included the Young Munster duo of Gearoid Lyons and Diarmuid McCarthy as well as Alex Wootton, of Garryowen.

The standard of opposition will increase significantly when the Irish side resume their summer campaign next month, with the winners in Lisbon going on to compete in the World Olympic Repechage in 2016 where they will play for the last spot at Rio 2016.

Elsewhere, the Ireland Women finished fifth overall after an exciting Rugby Europe Women’s Sevens Grand Prix Series came to a close in Malemort near Brive. They secured their second Plate title in as many weeks with a 19-5 final win over the Netherlands. The Ireland womens side included Shannon’s Nicole Cronin and the UL-Bohs duo of Claire Keohane and Louise Galvin.