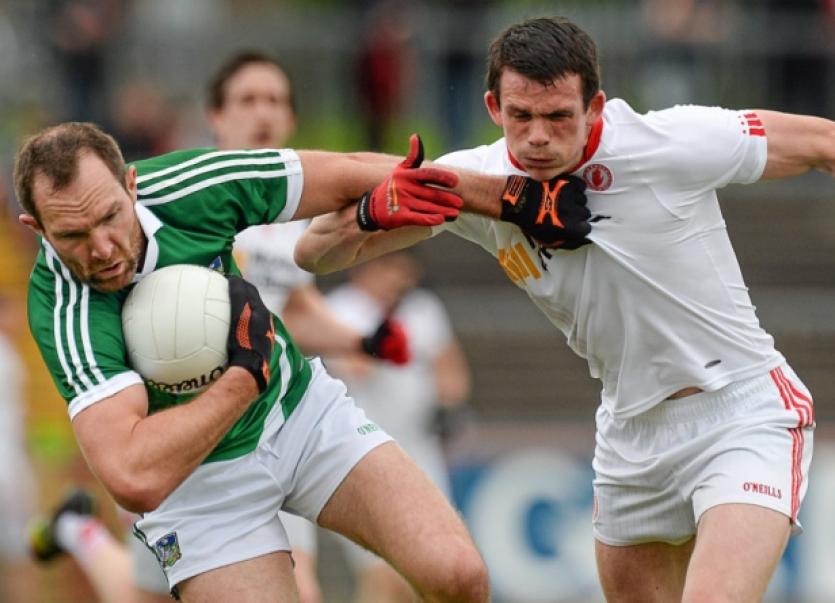 BATTLING Limerick have made their exit from the All Ireland SFC after a 1-14 to 0-8 defeat to Tyrone in Omagh.

BATTLING Limerick have made their exit from the All Ireland SFC after a 1-14 to 0-8 defeat to Tyrone in Omagh.

John Brudair’s side were rank outsiders in Healy Park but brought a massive work rate and defensive set-up to a game against Mickey Harte’s side.

Youthful Limerick were patient and composed throughout the contest but were left to rue 10 wides, compared to just fiev for Tyrone.

With five minutes to play it was 0-12 to 0-7 but the home side added a late goal and a couple of points.

At half time Limerick trailed 0-6 to 0-4 and that was after playing with a diagonal breeze in that opening half.

It was a 35-minutes that saw Limerick kick six wides and Tyrone just two.

Tyrone were 0-3 to no score up after 11-miutes with Mattie Donnelly, Sean Cavanagh (free) and Conor McAliskey kicking the Tyrone scores.

Limerick were off the mark in the 15th minute when Gearoid Hegarty lofted over.

Those points came from Ian Ryan and a Robert Browne free to leave it 0-4 to 0-3 with 26-minutes played.

A Darren McCurry free hit back for the home side before a Brian Scanlon ‘45 ended the Limerick scoring in the first half.

That ‘45 came when Conor McAliskey got back from attack to get his finger tips to a Hegarty handpass that was intended for Robert Browne, who had got in behind the Tyrone defence and had goal on his mind.

In reply to that ‘45 was the final score of the half from Tyrone.

But it was a half that saw Limerick lose Cillian Fahy and Darragh Treacy to blackcards with debutante Brian Fanning and Micheal Brosnan coming in.

Limerick needed a good start to the second half to ask serious questions of Tyrone but it never came.

Cian Sheehan pointed from a tight angle but the home side were 0-10 to 0-5 ahead 10-minutes into the second half.

Limerick needed a goal and it almost came in the eighth minute of the second period. Ian Ryan’s free came off the upright and into the goalmouth where Gearoid Hegarty got a fist to the breaking ball but it came back off the post.

When Kevin Moore added another free it was just five points of a Tyrone lead.

Alas there were no late dramatics.

Sean Cavanagh hit back for Tyrone and the home crowd in the attendance of 5225 breathed a collective ye of relief as the Limerick challenge finally looked finished.

In injury time Peter Harte palmed a flowing move to the net for a final score that was somewhat hash on a brave Limerick performance.