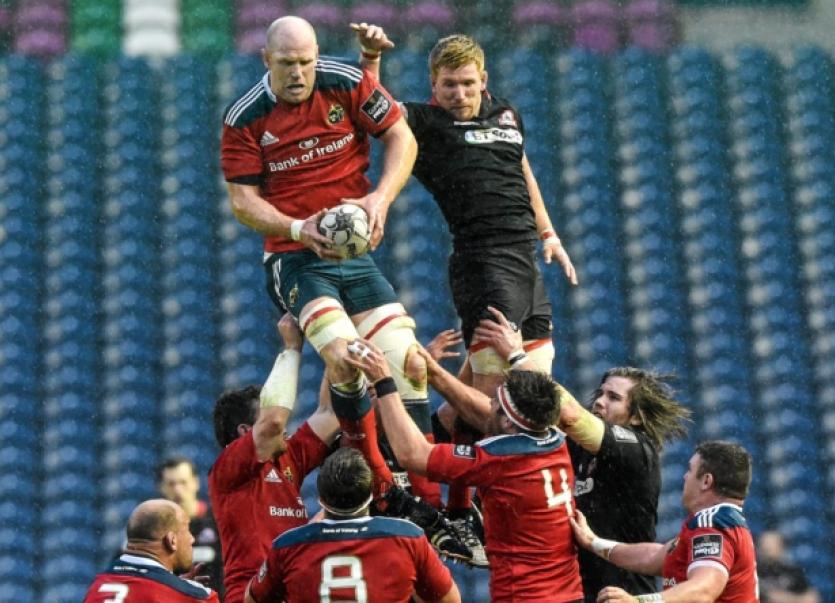 MUNSTER head coach, Anthony Foley is predicting some ‘feisty’ fixtures over the remaining three rounds of the Guinness PRO12 as teams battle it out for top four play-off spots.

MUNSTER head coach, Anthony Foley is predicting some ‘feisty’ fixtures over the remaining three rounds of the Guinness PRO12 as teams battle it out for top four play-off spots.

Munster moved second in the table - edging out third-placed Ulster on points difference - as a result of their impressive bonus point victory over Edinburgh at Murrayfield on Saturday night.

Leinster’s defeat away to the Dragons on Sunday means that fourth-placed Ospreys are now eight points clear of Matt O’Connor’s side.

Munster coach Anthony Foley said: “I don’t think looking up the table is wise you know particularly with some of the fixtures that are going to come. The next two rounds in particular are going to be feisty.

“We’ve three games left, we’ve two at home and obviously you want to try and win your home games and try and sneak a couple away.

“In two weeks time we have Treviso at home. We want to maintain top four and I know people talk about home semi-final, but at the moment with the way the top half of the league is working you want to make sure you’re into the top four and get into the knockout stages so that’s our focus.”

Meanwhile, on the club rugby front, Young Munster will travel to the back pitch at the Aviva Stadium to take on Lansdowne in an Ulster Bank League Division 1 semi-final on Saturday, April 25 at 2.30pm.

On the same day, Garryowen, who finished second in 1B, take on St Mary’s College in a high stakes promotion play-off at Templeville Road.