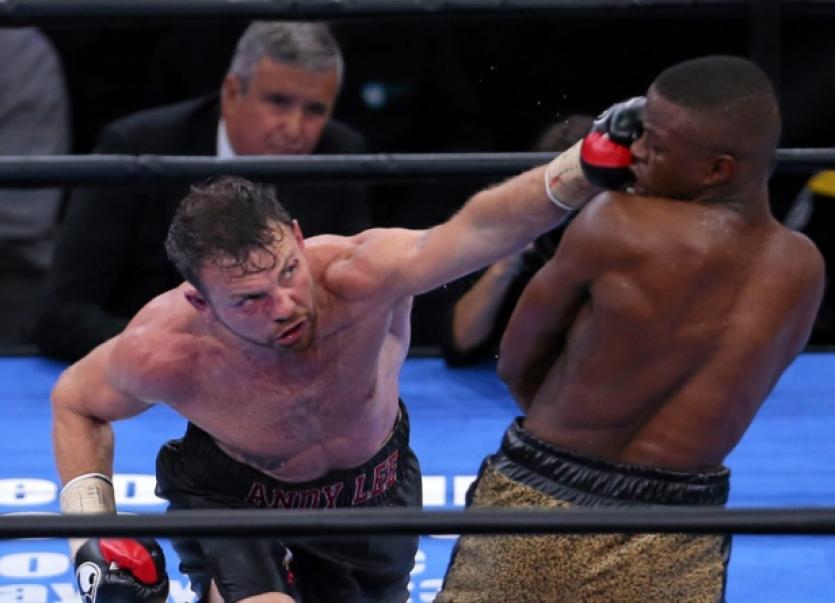 ANDY Lee could be set to defend his WBO middleweight title in Thomond Park this August.

ANDY Lee could be set to defend his WBO middleweight title in Thomond Park this August.

After the weekend’s dramatic non-title contest with Peter Quillin in New York, Lee looks set to live out his dream and defend a major title in Limerick.

It is understood that Lee is to take a well earned holidays after four major fights in four months and therefore mid to late August looks most likely for his next fight.

While some will call for a rematch with Quillin, a date with mandatory challenger Billy Joe Saunders now looks most likely.

Saunders fights in early May and once that obstacle is passed all points to a clash of the duo.

There is no doubting that Lee and Adam Booth will push for Thomond Park, but Saunders and his manager Frank Warren will likely try to bring the title fight to London with West Ham’s Premier League ground Upton Park a possible destination.

“August in Thomond Park would be nice,” said Lee of his next fight.

“Both of us enhanced our reputation,” recalled Lee of the weekend’s draw with Peter Quillin.

“That’s what was on the line. We both came out looking better for it. He showed his class and I showed my resilience and eventually my boxing,” explained the Limerick man.

Lee revealed that he battled on in the final rounds with a strained biceps muscle in his left arm.

He also told how the referee acknowledged an error in calling Lee for his second knockdown in round three.

“In his last knockdown, he (Quillin) stood on my toe and the referee acknowledged that after the fight and said it was a mistake. I know that decisions are made in a split second but overall I think it was a fair result,” said the 30 year old former St Francis Boxing Club Olympian.

“We are both counter punchers ultimately and we’re also both big punchers. There were knockdowns for both of us. We had to be careful. You can’t make a false move as both of us made each other pay for mistakes. It may not have been great for the crowd watching but we’re in the ring and it’s dangerous and you have to be careful.”

He explained: “I don’t want to make any excuses and it was a fight at the end of the day so you’re going into it to win but you’re going in knowing that the title is restored anyway and in your mind if I lose the fight I’m still champion so how do I feel about that. It was a weird situation to go into.”