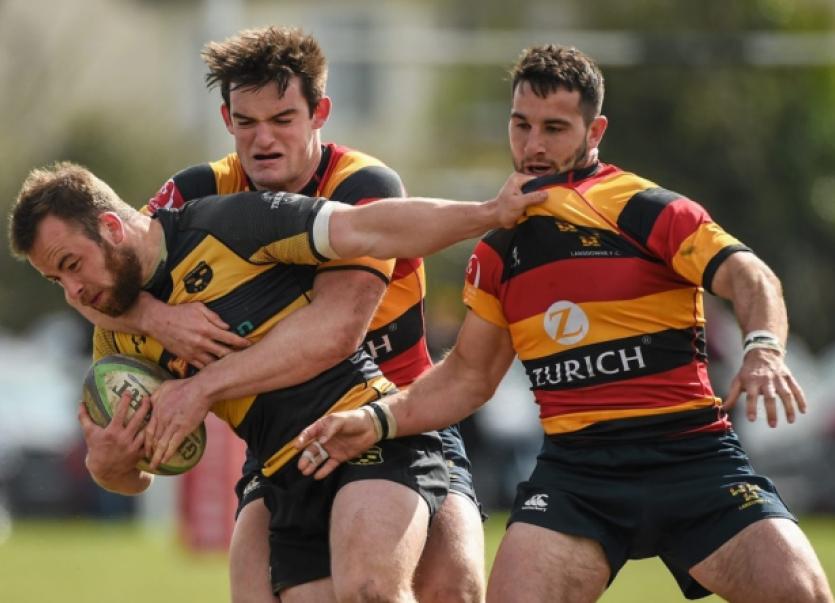 YOUNG Munster’s Ulster Bank League Division 1 semi-final clash with Lansdowne is set to be played on the main pitch at the Aviva Stadium on Saturday, April 25.

YOUNG Munster’s Ulster Bank League Division 1 semi-final clash with Lansdowne is set to be played on the main pitch at the Aviva Stadium on Saturday, April 25.

The decision to stage the game at the marquee venue, rather than Lansdowne’s artificial 4G pitch adjoining the stadium, should encourage an even greater number of Munsters’ supporters to attend the semi-final clash. The semi-final has a 2.30pm kick-off time.

Young Munster earned their semi-final showdown with Lansdowne after recording a thrilling 15-5 victory over the same opposition at Clifford Park on Saturday. Munsters’ leapfrogged Ballynahinch into fourth place in the table through a combination of their impressive win and the Ulster side suffering a dramatic home defeat to Bateman Cup finalists Clontarf.

Munsters have enjoyed a strong finish to the regular season as the Clifford Park side was lying in the relegation zone at the end of February.

Following their frustrating 6-3 defeat to Cork Con on February 21, the John Staunton-coached side has racked up a terrific run of four successive wins to book a semi-final spot.

Munsters’ defeated Dolphin, UCD, St Mary’s College and Lansdowne in an excellent run which secured what at one stage looked like unlikely play-off berth.

In the second of the Division 1 semi-finals on April 25, Terenure College will host Clontarf at Lakelands.

The final of the Ulster Bank League is due to take place at the Aviva Stadium on Saturday, May 9 at, 1pm.

Munsters’ will be looking to secure a first All-Ireland League Division 1 success since 1993.

John Staunton was lavish in his praise of the players following their deserved weekend win over their semi-final opponents Lansdowne.

John Staunton said: “We spoke during the week about going into this game not wondering about what would happen around 4 o’clock on Saturday.

“I was delighted with the performance and the lads put in a massive shift.

“Lansdowne are a fantastic side, you could see the quality they have. It was a massive effort from our lads, they never shied away from the challenge and I’m terribly proud of them.”

“It’s been a roller-coaster season for us. We had a lot of injuries and a bit of disruption and we struggled to get consistency.

“Our target was a top four place. The semi-final against Lansdowne is going to be another great contest in a couple of weeks time.”