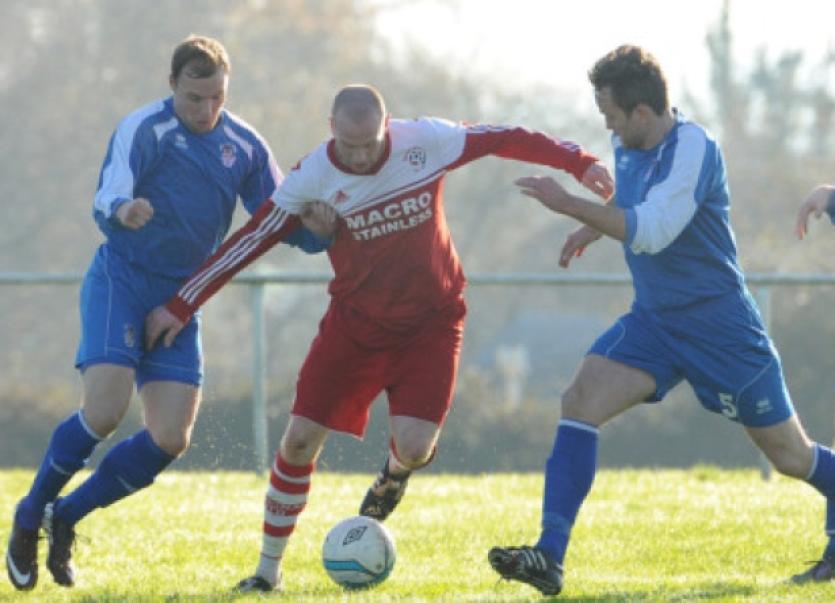 THE six Limerick teams through to the out of town stages of the Munster Junior Cup following the weekend action.

THE six Limerick teams through to the out of town stages of the Munster Junior Cup following the weekend action.

Regional Utd were 2-1 winners over Corbally in the only all-Premier Division game. Kieran O’Connell put Regional in front when he headed home a Brian Aherne corner and it was 1-0 to Regional at the break.

A stunning 25-yard free kick from Mike Guerin had Corbally back on level terms early in the second half however Regional hit back on the hour mark when Danny Galvin headed to the net from close range. And that proved to be the wining score.

The big shock of the day saw Division 1A side Mungret Regional beat Fairview Rangers 2-1. Fairview had beaten Pike Rovers in the previous round but were brought back down to earth at Mungret on Sunday morning.

Eddie Byrnes had put Fairview one up just before the break but Mungret got the upper hand in the second half and goals from Ger Burke and Dave McNamara earned their passage into the next round.

Moyross were 7-3 winners away to Shannon Town, Geraldines beat Herbertstown 6-0, Janesboro were 8-1 winners over Charleville while Newport beat Summerville Rovers B by 2-0.

Meanwhile, in the Premier Division, Ballynanty Rovers and Pike Rovers played out a 1-1 draw in Shelbourne Park on Sunday morning. The draw is enough to put Ballynanty one point clear at the top of the table.

Derek Daly put Balla 1-0 up early in the second half but Kieran O’Hanlon equalised for Pike and it stayed 1-1 to the final whistle.

Elsewhere the Limerick DL Youths team got their campaign back on track thanks to a 3-1 win away to the Clare League. Keith Mawdsley helped himself to two goals while Evan O’Connor got the other.

- For all the weekend LDMC soccer action, see this Monday’s print edition of the Limerick Leader