Great day for Limerick athletes at National League in Athlone 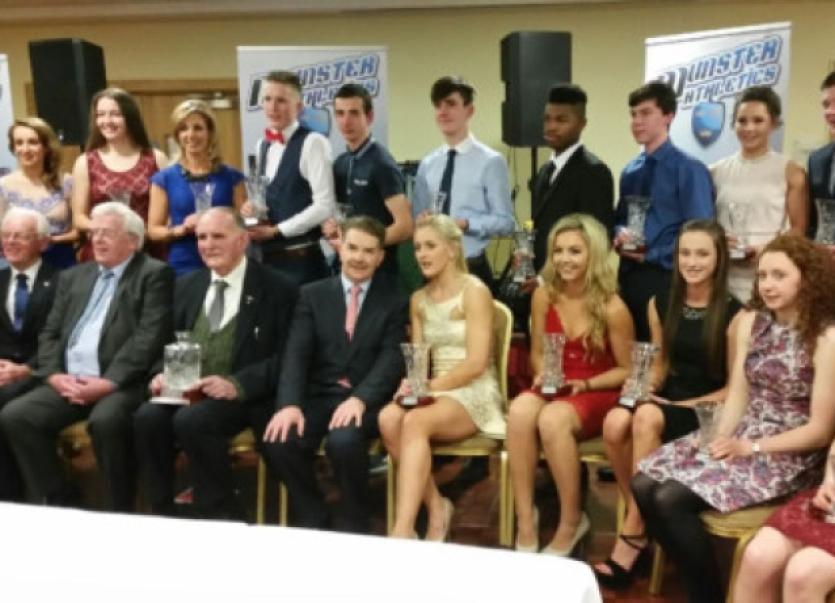 Verena Tarpey rounds up all the latest Limerick athletics news.

Verena Tarpey rounds up all the latest Limerick athletics news.

The second round of the National League took place in Athlone on Saturday. This event featured teams from the top tier clubs in Ireland. Only the top six women’s and men’s teams were going through to the final.

This league is a club based competition over three rounds. Events are divided over the two rounds with three track events and two/three field events. The final round covers all events and the top six teams compete in final round – a scoring system applies. Dooneen AC went to Athlone on Day 2 in a strong position, but knowing they had a lot of work to do. The women’s team were in fourth position going in to last Saturday’s events with the men’s teams in ninth and 20th respectively.

Their team manager David Cowhey travelled with them on the day for support as did the Chairman of the club, Paul Askins. There was an overwhelming sense of pride and enthusiasm by all on the journey up and wonderful to see the support given to each athlete by their team mates. The men’ s team started the day in 9th position and they left nothing behind them, they gave it their all and pulled their way up to 6th place, securing their place in the final. The second men’ s team started in 20th position and with every ouch of strength and determination, brought themselves into 10th place. The ladies team suffered a few injury’s before the event but places were filled up nicely by other athletes, only delighted to be given the chance to represent their club – despite the injuries, the women held on and finished in 6t overall, also securing their place.

With very little points between the teams, it’s all to play for at next week’s final, when we start off with a clean slate in terms of points and hopefully an injury free and full squad. It will make for an exciting day so anyone who wants to go and show their support are more than welcome.

The Munster Star Awards recognises the achievements of athletes at Provincial Level and a ceremony took place last Saturday last in the Blarney Resort Hotel for these athletes. This year, athletes from a number of clubs have been recognised including Ciara Neville, Sarah Lavin, Stanley Ikeh, Lily Ann O’Hora, Eoghan Beary and Mike Cunningham.

Stanley Ikeha of Limerick AC is an excellent sprinter and competed in indoors, Track and Field and schools competitions last year taking gold in the North Munster Schools Relay and 2nd in the Munster Schools relay. Limerick’s Sarah Lavin of UCD, a talented hurdler needs no introduction and has a silver medal in the European Junior Track and Field Championships to her winning tally. Ciara Neville of Emerald AC was also honoured. She has many highlights including being a gold medallist in the Munster Indoor 60 metres hurdles final last year as well as 3rd in All Ireland U16 60 metre hurdles.

Lily Ann O’Hora and Eoghan Beary, both of Dooneen AC, were also recognised. Eoghan of course was here before and was a 2013 Munster Star winner. Eoghan is a talented cross country runner and was 5th in the Munster U17 and 7th in U18th Championships this year as well as competing in the All Ireland Finals. He was winner of this year’s Junior Limerick Triathlon Club Duathlon and Ennis Duathlon. Lily Ann is a DCU student studying sports science and won gold in the 60 metre hurdles in the Munster Indoor Seniors, bronze in the Irish Seniors 60 metre hurdles, silver in the intervarsities and went on to represent DCU in Scotland. Mike Curly Cunningham also received an award for his part in Senior and Masters Cross Country. Mike has competed over 120 races last year including 3 marathons and 3 50k races. He is a regular at local and national events and is a talented mountain runner as well.

All roads lead to the Tom Walsh Memorial 10k this weekend in Caherconlish and we wish the athletes the best of luck. The family of Tom Walsh donated trophies in 2012 to the race committee which were won by Tom during his running career and are presented to the male & female runners of the 10k race. The Tom Walsh 10k and 5 mile walk is being held this Sunday, February 8, in Caherconlish and you can enter online at www.eventmaster.ie. The event is a great day for families, walkers, runners of all abilities with a 10k course challenging even for the serious runner. Post-race refreshments are at the Caherconlish Millennium Centre which continues to support the race with food & drink for all which has gone down extremely well with past participants.

Many club athletes travelled to Dungarvan at the weekend and competed in this traditional 10 mile road race. Doneraile was also a popular destination for this 5k road race and special mention must go to Edd Valatka of Kilfinane AC who won the road race in a time of 16.05.

Dates which have also been been confirmed for 2015 are as follows: Tom Walsh Memorial in Caherconlish has become a great fixture on the circuit now and will take place on February 8 at 2pm. The annual West Limerick Adare 10k will take place on February 22. On Sunday, February 15 an important club meeting for this event will take place on An Bru are delighted to host the 4 mile County Novice Championships at 11am. More details to follow. The Munster Senior and Novice 4 Mile is on March 15 with Munster Masters 4 Mile on March 29. Easter Sunday April 5 2015 at 12 noon sees a new race on the scene “Destination Limerick” 5 Mile road race organised by Dooneen AC - Entry fee €20 euro, walkers €10, Numerous prizes, Tech t-shirts and AAI approved - Race starts and finish at Limerick race course. Enquiries -Joe Chawke 087 7533526 and Tony Fitzgerald 0863006625.