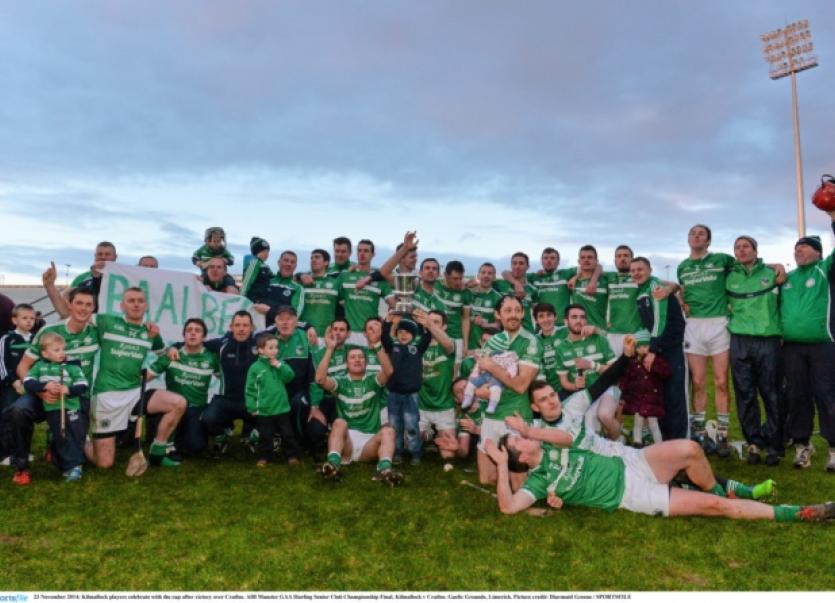 NEWLY crowned Munster champions Kilmallock have vowed not to rest on their laurels and go in search of Limerick’s first ever All Ireland club hurling title.

NEWLY crowned Munster champions Kilmallock have vowed not to rest on their laurels and go in search of Limerick’s first ever All Ireland club hurling title.

Twenty one years ago they were beaten in the St Patrick’s Day decider by Sarsfields of Galway and now the south Limerick men find themselves one win away from a return to the March 17 Croke Park final.

Standing between Kilmallock and an All-Ireland final appearance are Ulster champions Portaferry - Kilmallock will play the Down champions on Saturday February 7.

“We will have a good couple of days and then we will knuckle down over the Christmas and get ready for the All Ireland semi-final,” vowed Kilmallock captain Graeme Mulcahy.

Twice in the last three seasons Na Piarsaigh have been beaten in the All Ireland club semi-final.

After yesterday’s thrilling extra time victory over Cratloe, the bookies have listed Kilmallock as 5/2 favourites to win ultimate honours next Spring. On the morning of the Limerick county final, Kilmallock were 28/1 to win the All-Ireland and indeed 3/1 to win the county title.

But Ger ‘Sparrow’ O’Loughlin’s men have grown in stature over the past few months to win an 11th county title and become the first Limerick club to win a third Munster title.

“This is just elation - winning the county was one thing but going on and winning this is and extremely proud moment for me and all the lads,” said winning Kilmallock captain Mulcahy after lifting the O’Neill Cup.

“If you look at the games we have come through - there has never been a tougher route to win Munster, Doon, Adare, Na Piarsaigh, Sars and now Cratloe. We have beaten some super teams along the way and they have all been hard fought games and each game has brought us on leaps and bounds.”

He added: “We have had the likes of Kevin O’Donnell standing up in the county final and the like of Mark O’Loughlin, Bryan O’Sullivan and Jake Mulcahy stood up today and got some really important scores and then Paudie O’Brien in extra time was a real leader for us”.

The captain was loud in praise of the character shown by his team-mates.

“They were 1-3 to 0-1 up and were looking very strong and were running us raged and had three or four goal chances that on another day could have gone in but we rode our luck and dug-in and got back on top - in the first half they went ahead but in fairness all the lads showed great character to pull it back,” he recalled.

“We probably should have closed out the game in the second half but between one thing or another we didn’t and again we dug in and showed great character and got some fantastic scores. I think when Liam Walsh was sent off in the county final it took that to galvanise us and the last day Sars scored two goals and it took that to galvanise us and today that sending off brought forward our character,” he said of the red card for Gavin O’Mahony.

“I think we took it upon ourselves to take it to extra-time and then in the dressing room after we said we had to do this for him. It would be hard for us leaving the Gaelic Grounds today after losing, but it would be extra hard for him if we hadn’t gone on and taken the victory for him.”

Kilmallock were extra time winners in the semi-final and drew on that confidence again on Sunday.

“When we went in for extra time it was the same as the Sars game and we said ‘no regrets’, lets go out there and we knew that they had a tough match last week that could be a factor as well. They were out on their feet, we were cramping up a small but some of their lads were hanging in there and some of their big guys were struggling around the middle of the field and that was a massive factor,” noted Mulcahy, who hit six points from play in the thrilling victory.