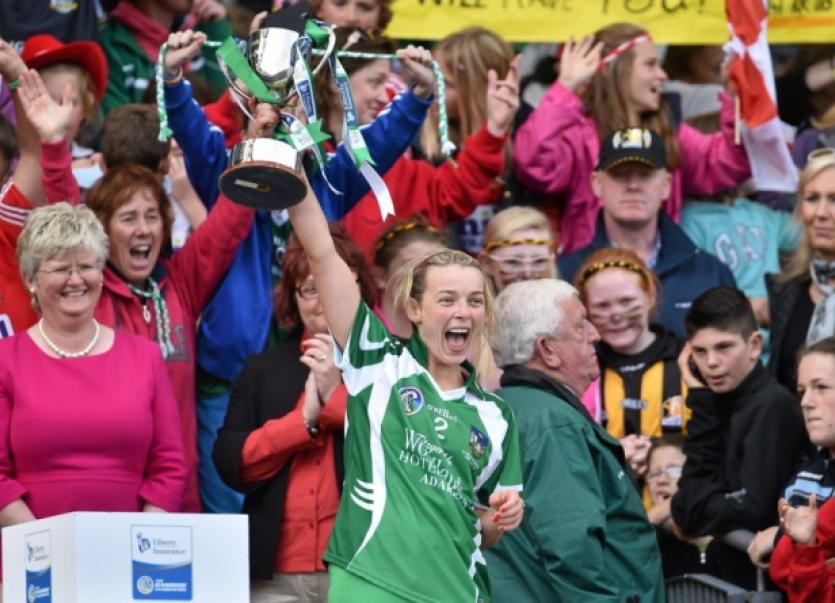 LIMERICK were crowned All-Ireland intermediate camogie champions this Sunday with a 1-12 to 0-10 win over Kilkenny in the championship final in Croke Park.

LIMERICK were crowned All-Ireland intermediate camogie champions this Sunday with a 1-12 to 0-10 win over Kilkenny in the championship final in Croke Park.

Captain Fiona Hickey climbed the steps of the Hogan Stand to lift the winning trophy and make amends for their final loss twelve months ago when they failed narrowly to Galway.

The win for the Joe Quaid managed side ensures that Limerick win promotion to the senior championship next season.

Indeed over the past four decades only the 2010 All-Ireland championship winning ladies footballers had emerged victorious from an adult championship final in Croke Park.

In this thrilling final win, Limerick led 1-5 to 0-6 at half time after playing into the wind.

It was Kilkenny captain Mags Fennelly that had the opening score of the game but two Niamh Mulcahy frees had Limerick settled and ahead by the fifth minute.

Mulcahy had a third free to increase the Limerick lead before Mary O’Callaghan had the first Shannonside point from play in the 14th minute for a 0-4 to 0-2 advantage.

With usual attackers Niamh Mulcahy and Caoimhe Costello playing and dominating midfield and the half back trio of Katie Campbell, Sarah Carey and Claire Mulcahy on top Limerick were beginning to dominate.

Mulcahy’s fourth free maintained the lead before the crucial score of the half came in the 19th minute.

Costello and Mairead Fitzgerald created the opening up the left wing and when the ball was crossed into the goalmouth Deborah Murphy kept her composure to crash the ball to the Hill 16 net for a 1-5 to 0-3 lead.

But that was it for Limerick in the half and they were to go the next 11-minutes without a score.

Bit by bit Kilkenny’s found their feet and had the last three scores of the first half, all frees.

It was a half that saw Limerick hit four wides and Kilkenny just one.

On the resumption Kilkenny looked to reduce the deficit and had three points from play in the opening 10-minutes.

The Limerick reply came from minor star Caoimhe Costello. Twice she was at the end of moves to split the posts into the Davin End Stand.

It was now Limerick showed all the experience of last year.

The next three scores came the way of Limerick and the attack was now brimming with confidence as Mulcahy, and Rebecca Delee increased the lead to four points entering the final quarter.

And, that lead was despite hitting 10-wides over the course of the game.

But it was a final quarter that Limerick dominated and Kilkenny were to score just once in the final 20-minutes.

An Orla Hanrick free in the 47th minute of the game merely interrupted the Limerick flow.

Player of the Match Niamh Mulcahy had her third point of the half to stretch the lead and then another of the minor stars Delee registered her second to seal the win.