End of the cup but Munster must fight on 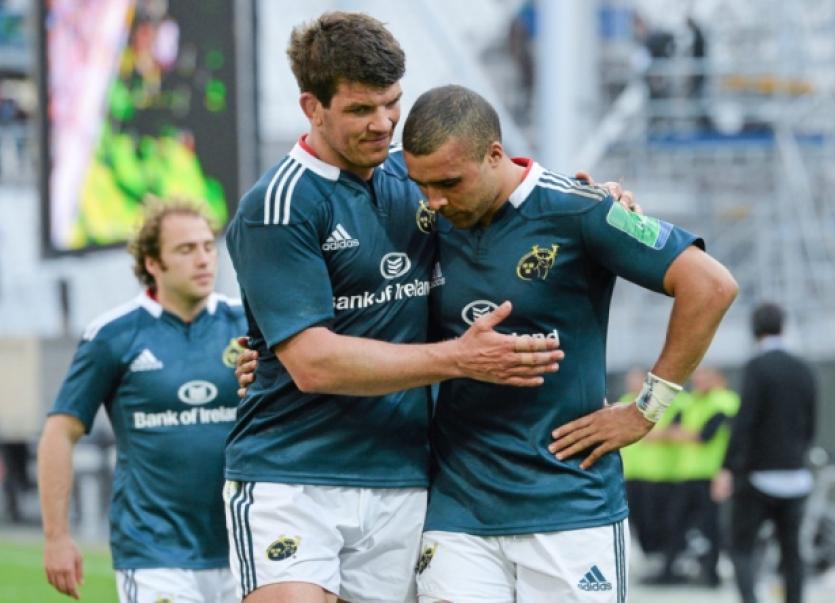 MUNSTER’S Heineken Cup semi-final defeat to Toulon on Sunday was the province’s fourth in the competition since their 2008 final success over Toulouse at the Millennium Stadium.

MUNSTER’S Heineken Cup semi-final defeat to Toulon on Sunday was the province’s fourth in the competition since their 2008 final success over Toulouse at the Millennium Stadium.

The heart-breaking reverse at the hands of a star-studded Toulon side leaves plenty of areas for Munster to ponder over into the future.

There is the question of whether Munster will be able to topple the big-spending French Top 14 sides, a number of whom are owned by patrons who have ever-deepening pockets.

Other areas for Munster to consider over the coming weeks and months include how Anthony Foley will make the transition into the head coaching role at the province and what will the final make-up of his backroom team be.

There is also the question of how Munster will set about replacing departing outside centre Casey Laulala and the increasing likelihood that his centre partner James Downey will also be away at the end of this season.

One must also consider too the issue of the naming rights to Thomond Park which is back on the radar for Munster Rugby. If Munster want to attract big-name signings into the future, they must be financed and an agreement on the naming rights to Thomond Park with a sponsor would be sure to secure some much-needed revenue for Munster Rugby into the future.

There was an outcry against the move by rugby fans, predominantly in Limerick when the issued was raised some years ago, but the province is facing even more testing times financially right now.

Simon Zebo: “It is going to have to come from within us I think. We have been here before.

“We had chances last year (v Clermont) and we didn’t take them. It is the same again this year. We cannot keep doing this to ourselves every year. We want to be competing for silverware. Semi-finals aren’t good enough at Munster Rugby. We need to have a long, hard look at ourselves and make sure that we are in with a fighting chance next year.

Ian Keatley: “We will get over today and start rebuilding. We have to finish off the season in the Rabo and hopefully we can come away with silverware there. It is pretty gutting today, but we will be back stronger next year.”

One healthy issue for Munster going into the years ahead is the age profile of the playing squad.

The average age of the Munster team which took the field at the Stade Velodrome on Saturday is 28 years. However, just six team members of the team has reached 30 and of those two are set to depart the squad this summer.

This is a young Munster squad with room for further development and improvement. The harsh lessons learned in the South of France last weekend should stand to the side in the coming seasons.

Rob Penney departs Munster this season after a two-year tenure as head coach which has seen the province reach two Heineken Cup semi-finals.

While both Penney and Munster Rugby have remained tight-lipped on the matter it looks like a safe bet that the New Zealander would have opted to remain at the province beyond this summer had he been offered a new two-year rather than a one-year deal.

Penney’s post-match comments in the wake of Sunday’s defeat were interesting in that he admitted he would have loved another shot at winning the semi-final.

Penney said: “I have been left hollow by the two experiences I have had at Heineken Cup semi-final time. On both occasions, I believe we could have won.

“I suppose at the squad matures a bit - I don’t believe there was a belief issue today - last year there may have been a bit of a one, but not this time.

“I thought we didn’t get a couple of early decisions. Momentum swung and we were chasing our tail a little bit all the way through.”

Current forwards coach Anthony Foley gets his shot at Munster head coach next season. Many had expected him to success Tony McGahan two years ago, but former number eight Foley was left to serve a further two-year apprenticeship.

Born, bred and raised with Munster rugby, Foley is bound to bring plenty of ideas to the table on how best to help Munster develop still further, to bring the province to the next level.

The exact make-up of his management team, which he is working on at present, will be fascinating.

Foley looks likely to remain as forwards coach as well as head coach. Ian Costello looks a good bet to also remain in the set-up, while Niall O’Donovan is confirmed as team manager.

That could possibly leave the role of backs coach up for grabs, with names like Eric Elwood and Eddie O’Sullivan being mentioned as possible successors to the departing Simon Mannix. All will be revealed in the coming weeks.

One of the biggest issues for Foley in terms of playing personnel for next season will be the question of who is going to replace the departing Casey Laulala as first choice in the number 13 shirt next season.

Munster would not appear to have the money to compete with the top French and English clubs for the big name outside centres.

Selling the naming rights to Thomond Park is likely to be met with opposition from grass roots rugby supporters in Limerick, but perhaps not as much as before, given the current financial state of Munster Rugby’s finances.

With a World Cup year coming up in 2015, will top class centres from the Southern Hemisphere with realistic ambition of playing in the finals, be willing to sacrifice that ambition for the opportunity to come and play with Munster?. Unlikely one would think.

While Munster did get a financial lift from hosting their Heineken Cup quarter-final with Toulouse in Limerick, CEO Garrett Fitzgerald revealed in February that revenue from ticket sales was already down €600,000 for the season.

Munster will be desperate to win their remaining two RaboDirect PRO12 fixtures and hope it is sufficient to see the province secure a home semi-final in the play-offs. But even winning those remaining two games - away to Edinburgh in their new Meggettland ground this Saturday and at home to an Ulster side likely to be clinging on to fourth spot a week later - might not even be enough for Munster as Glasgow, the team currently in second and a point ahead of Munster play the two Italian sides in their last two games.

The loss to Glasgow the week after Munster’s Heineken Cup quarter-final is likely to haunt the province and if the games go to form over the next two weeks, then Munster will probably be away to Glasgow in the Rabo semi-final. Leinster, who play Ulster in Ravenhill this weekend, will almost certainly top the league and be at home to Ulster or the Ospreys in the semi-final.

Munster’s interest in the Heineken Cup ended last Sunday and when they return to European rugby next year, the new competition will be bring new challenges.

With only 20 teams in the competition, there will be five pools of four teams with the pool winners and three best second-placed teams going through to the quarter-finals. Getting rid of four teams (some of the weakest from the PRO12) will mean a tougher schedule of games. There will only be three seeded teams - the winners of the Rabo, the English Premiership and the Top 14 - meaning that there would be nothing stopping Munster from ending up in a pool with the likes of Saracens, Toulon and Clermont.

The fact that the final will be played three weeks earlier - and so compressing the knockout stages into a smaller window - will also be tougher on the Irish sides who are reliant a core group of players who’ll have just finished a Six Nations campaign.

Munster, you’d hope, will find a way of competing at the top once again but it will be tougher than ever.

On the playing front, Denis Hurley and Johne Murphy have signed one-year contract extensions and Dublin University prop Martin Kelly will also link up with the province next season. Ian Nagle, once one of the most exciting young players in the province, hasn’t taken up the option of a new contract.