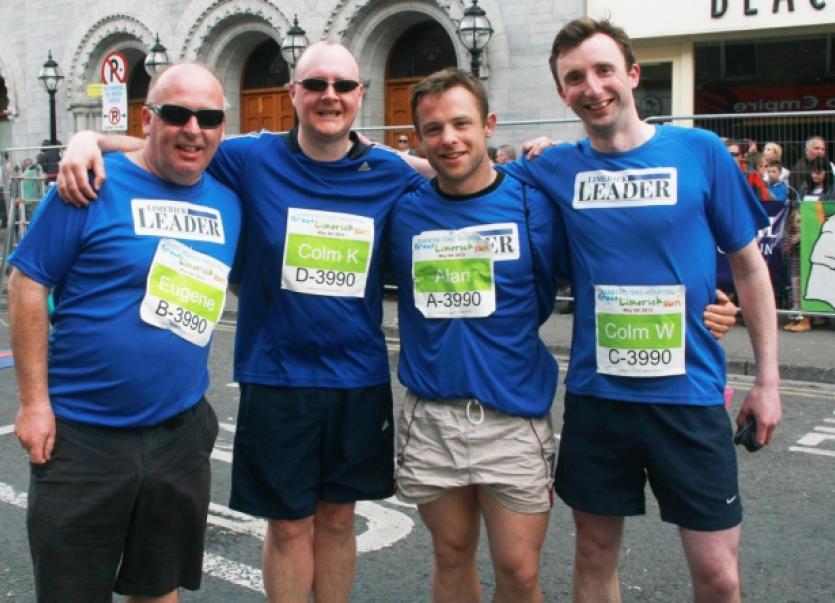 Close to 10,000 people will take part in the Great Limerick Run on Sunday and many more will line the route. Steven Miller picks out 11 types of characters you’ll come across.

Close to 10,000 people will take part in the Great Limerick Run on Sunday and many more will line the route. Steven Miller picks out 11 types of characters you’ll come across.

You’ll spot them a mile away. Not a pick on them, will be there early and their warm-up would leave most people doubled over with cramps. Will be right up the front for the start and will glide effortlessly around the course. Not to be messed with

Will look the real deal in colour coordinated gear, top of the range runners, sunglasses, earphones and possibly a watch on each wrist so they can keep track of split times, lap times, 1k times and their heart rate. Also have a decent supply of energy gels for during the race and protein shakes for afterwards. Rarely as good as they look

3. The Over Enthusiastic One

Will be bounding around the place before the start, talking to everyone they know (and even people they don’t), waving at the crowd and encouraging everyone around them during the race. Will have a stock of phrases ready to use for the route, particularly as they pass somebody out, like “keep it going now”, “you’re going great” or “nearly there, push it out”

4. The Fancy Dress One

Running any type of race is tough enough going at the best of times when you’re in the right gear but dressed up as one of the Bananas in Pyjamas or Shrek must be torture. Yet they’re always in high spirits and get loads of attention from the crowd. Very embarassing when one of these characters pass you out

These big occasion runs are a new departure in recent years and they’re not convinced whether they’re a good thing or not. They’ve been members of an athletics club for as long as they can remember and they’ll be at a heap of lower-key events throughout the year. Will wear the club singlet proudly and make their way around the course with the minimum of fuss. Beware of the veteran ones. Some of them might look older than your grandparents but they could give you a good head start and still beat you

6. The Lads From Other Sports

Ah, the hurlers or the rugby players out for the day out. Will be well impressed by all the “good looking young wans” and will be doing their best to impress by running as fast as they can for as long as they can. Will wear the GAA or rugby shorts, socks and possibly even a jersey - and in some cases it could be the same gear they wore at training during the week. You’ll smell some of these before you even see them. Bar the actual football boots, they might as well be togged out for a match

Will have an inflated sense of how good they are and will push their way close to the front at the starting line. Will go off at an incredible pace but that will drop substantially as the race goes on and they could even stop for a walk at some stage and/or greatly exaggerate an injury. Will keep going though and with about 200 yards to go will make a massive burst for the finish line. With about 150 yards to go, they’ll slow right down again and then take off again for the last four or five yards. Some will lie about their finishing time afterwards. Others will blame injury for their surprisingly bad time

Not groupies of actual runners, but a group of people who’ll run it together. Probably part of a running group or mother and toddler group, they’ll enthusiastically show up in matching t-shirts. They’re probably raising funds for some charity so will be in high spirits and won’t be too bothered with how slow or fast they do it as it’s “a great day out all the same”. Will all meet up afterwards for a few drinks

Somebody in their workplace will decide it’s a great idea for everyone to take part and vague training plans will be drawn up early in the new year. These will never materialise and they will hope that it will all be forgotten about. When it doesn’t they are left with no option but to take part but even the saga of rooting out some actual running gear is a bit of an ordeal. Will stand out like a sore thumb on the day of the event and will puff and pant their way around the course, sheer ignorance and pride being enough to get them over the finish line. Will drink a heap of pints afterwards, get a big feed from the Chicken Hut, be stiff for about a week and will never run again.

Will be the one that will absolutely torment the ‘Forced Ones’, as profiled above, for months beforehand. Will try to organise training sessions, teams for the relay event and will update everyone with their own individual progress. Will talk about little else in work and will have any number of bets with their colleagues - ranging from imaginary head-starts to a straight-up race. On the day of the event, the run could go one of two ways. They could run a brilliant time and be smug as hell afterwards. Or the pressure could get to them and they bomb completely. In that scenario, you won’t hear a word from them and they’ll probably give up the whole running thing altogether