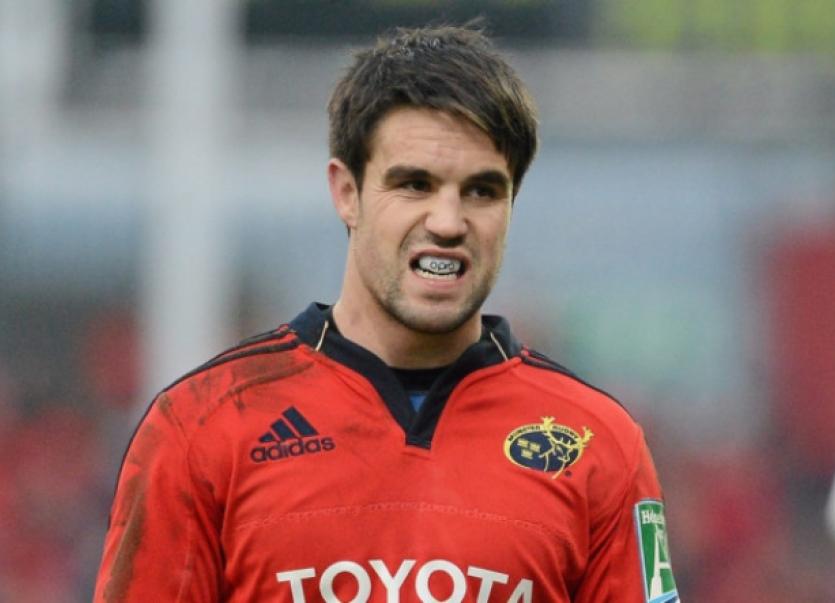 SCRUM-half Conor Murray has signed a new two year contract with the IRFU which will see him remain at Munster until at least June 2016.

SCRUM-half Conor Murray has signed a new two year contract with the IRFU which will see him remain at Munster until at least June 2016.

However, it has also been confirmed that Murray is set to be sidelined for up to six weeks after sustaining medial ligament damage in his right knee against Perpignan on Sunday. The news looks set to rule Limerickman Murray out of Munster’s three remaining Heineken Cup pool fixtures, starting with Sunday’s return tie with Perpignan at the Stade Aime Giral.

The announcement on Murray’s new contract ends speculation that Lions star may be considering a big-money move to France next season.

Murray today said he was delighted to have penned the new contract which will keep him at Munster for two more seasons at least.

The news is a big boost to Munster ahead of Saturday’s crucial Heineken Cup return fixture against Perpignan at the Stade Aime Giral, although Murray is set to miss that game due to a knee injury.

Commenting on his contract extension, Murray said: “I am thrilled to sign a new IRFU contract and to continue playing my rugby with Munster. In 2013 I learned a lot as a player with my club, Ireland and the Lions and I hope to continue to develop and push for honours over the coming years.”

Limerickman Murray made his senior debut for Munster against Connacht in April 2010. The Munster Rugby academy graduate has made 49 appearances for Munster and has scored 6 tries. Garryowen clubman Murray made his Ireland debut against France in a World Cup warm-up in August 2011. The 24 year old has won 22 caps and has scored 2 international tries. His last appearance for Ireland was in November 2013 against New Zealand in the recent Guinness Series reverse.

Murray was selected for the 2013 British and Irish Lions tour of Australia and featured in seven of the Lions’ tour matches including the final two Test matches. He scored two tries for the Lions touching down against Combined NSW-QLD Country and the Melbourne Rebels.

Munster Coach Rob Penney said: “We are delighted that Conor has signed a new IRFU contract which will secure him to Munster until the end of the 2016 season. “Conor has illustrated in recent months the value he brings to not only Munster but to the national team as well At 24 he is still a young guy and he has the potential to go on to become one of the best scrum-halves in the game.”

IRFU, CEO, Philip Browne, added: “Conor has made a significant impact on Munster and Irish rugby since making his breakthrough in 2011. We are delighted that he has signed a new contract that will keep him at Munster until the end of the 2016 season.”