How the Munster players rated against Perpignan 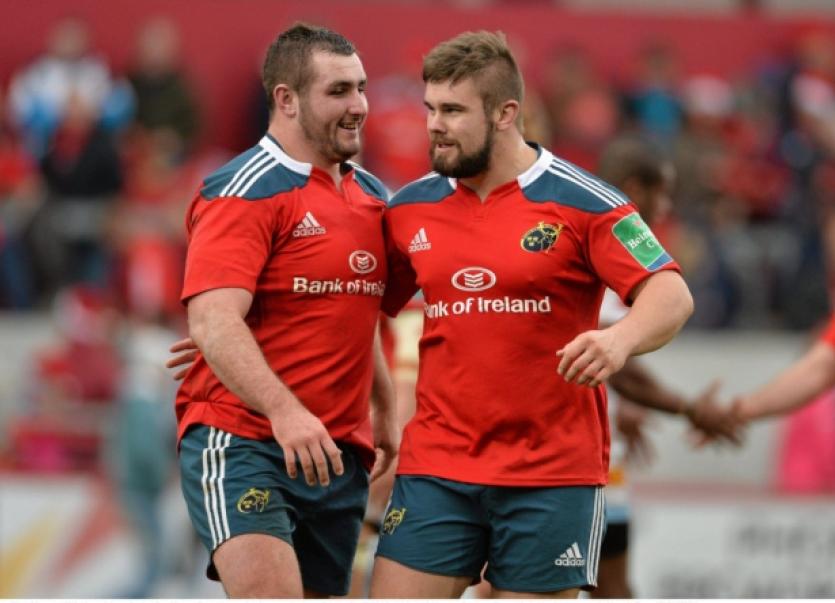 Munster had a comfortable 36-8 win over Perpignan in Thomond Park on Sunday afternoon, to move them into top spot in Pool 6 of the Heineken Cup.

Munster had a comfortable 36-8 win over Perpignan in Thomond Park on Sunday afternoon, to move them into top spot in Pool 6 of the Heineken Cup.

Never tested defensively but looked lively when going forward and eager to get involved as much as possible. Unfortunate that Ian Keatley’s cross-field kick in the first half was a little overcooked. Replaced by Denis Hurley in the second half

A fine performance from Earls who set the tone early on with a couple of fine bursts and really got the crowd going with his wonderful try before half time. Given the official man of the match award

Looked to pick up an injury in the opening half but battled on nonetheless. Never put on the back foot, something which could change next week, but he did nothing wrong

Like Laulala he had nothing to do defensively but he put in his usual solid performance. Will be a big player in the return game on Saturday

Did very well to set up the game’s first try for Sean Dougall, he was heavily involved early on. Kicked well too

Started the game very well when he looked very assured. Turned the Perpignan defence on a couple of occasions and also showed great alertness to try a crossfield kick to Felix Jones, which unfortunately didn’t come off. Went off with a slight injury in the second half but should be ok for next Saturday’s game

His injury was the biggest negative to emerge from the game and Munster will be hoping that he isn’t ruled out for too long. Had started very well and his pass to Johne Murphy in the lead up to Munster’s first try was one of the standout moments of the game

Has come under pressure from James Cronin this season but has responded well to the challenge. Showed typical strength to power over for Munster’s second try and was always involved

With Mike Sherry out for the next six months, the number two jersey would appear to be all Varley’s. The lineout wobbled slightly on Sunday but Varley was busy around the park and made one great run in the first half

Given the nod to start instead of BJ Botha, he did nothing wrong and will have benefitted from the experience. Will be interesting to see who will be starting next weekend

Munster’s oldest players but shows no sign of slowing up. Always looking for work to do and put in another typically robust display before being replaced by Billy Holland in the second half

Didn’t hit the same heights as he did against New Zealand for Ireland but he never had to. Always there to do what needed to be done

Played a big role in the turnover that led to Keith Earls try and he also made a big carry in the lead up to Dave Kilcoyne’s. Abrasive and aggressive throughout. The same as ever, really

Put in a fine performance as well as being on hand to score Munster’s first try and continue his fine try-scoring record in this competition. Got through a lot of work and can be rightly pleased with his display

He was left out for Munster’s last Heineken Cup game - the home tie against Gloucester - but he returned here and was impressive throughout. His late try was just reward for a fine display

Was thrust into the action much early than he would have anticipated but handled the occasion well and didn’t look out of place. Provides a slick service, he should be in line for his first Heineken Cup start next weekend

Got 30 minutes of action after Keatley hobbled off but the game was decided by that stage. Missed a touch with his first kick and his two conversions were handy ones. If Keatley recovers from injury, then he’ll return to the bench

Started on the bench as Stephen Archer was started ahead of him. Carried well on a couple of occasions when he came on and could return to start this weekend

A Heineken Cup debut for the Shannon man. Replaced Damien Varley late on but could get plenty more chances in the coming weeks as Mike Sherry is ruled out

Replaced Dave Kilcoyne, he showed his strength and ball-carrying ability on a number of occasions. A good showing

Only got eight minutes at the end when he replaced Peter O’Mahony. A fan’s favourite but struggling to nail down a regular starting spot