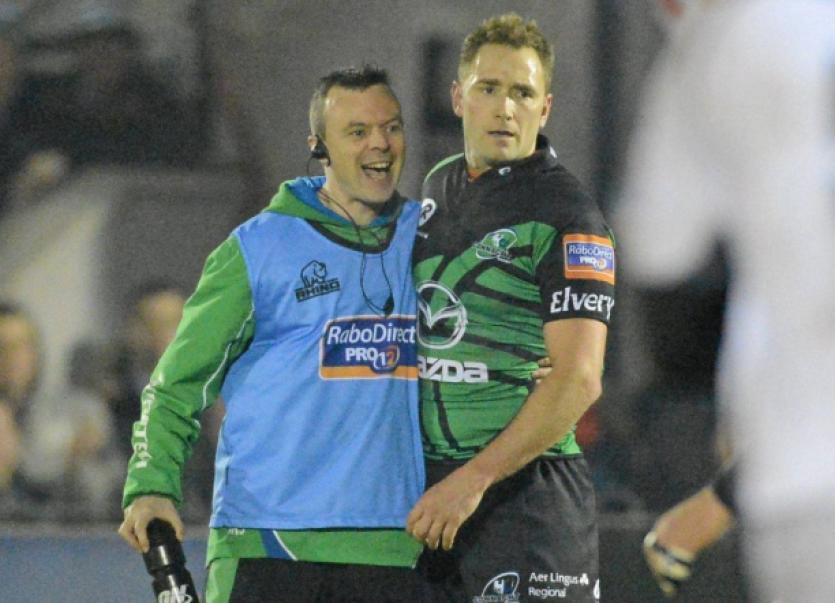 WHEN Limerickman Martin Joyce had tidied up the training equipment after Connacht’s captain’s run at the Stade Ernest Wallon in Toulouse on Saturday evening, his thoughts wandered back to home and the more modest surrounds of a Gleeson League fixture.

WHEN Limerickman Martin Joyce had tidied up the training equipment after Connacht’s captain’s run at the Stade Ernest Wallon in Toulouse on Saturday evening, his thoughts wandered back to home and the more modest surrounds of a Gleeson League fixture.

Connacht kitman Joyce is also head coach of the Garryowen FC thirds and the Dooradoyle side faced a crucial fixture against UL-Bohemian that same afternoon.

A text message confirmed what Janesboro-born Joyce wanted to hear, Garryowen won to take them top of the Gleeson League for Christmas.

The first half of Joyce’s dream weekend rugby double was up. The omens were good for Sunday.

But the task facing Joyce’s employers Connacht the following day was enormous.

French and European aristocrats Toulouse had not been beaten at home in the Heineken Cup for five seasons and Connacht were going into a the game on the back of a 43-10 PRO12 hiding at the hands of Edinburgh the previous weekend. The bookies don’t get it wrong too often. They had Toulouse unbackable 1/200 favourites to win, while Connacht were 20/1 outsiders in a two-horse race.

But Martin Joyce, now in his fifth season as Logistics Manager with Connacht Rugby, had a sneaking feeling, maybe, just maybe something remarkable was about to unfold.

Martin Joyce said: “When people asked me for a prediction before the game, I couldn’t give one. I couldn’t tell anyone whether we would win, lose or draw and that’s the truth. I knew we would get a reaction from the lads.

“We had a bad day at the office against Edinburgh. We have had a rough season so far.

“We had a big honesty call with each other during that week. We were just honest we each other, said what needed to be done. Guys fronted up. I expected a reaction, but I wasn’t sure it would bring a win, loss or a draw. I expected the team to give a big performance.

“Guys were in good form on the way out from Dublin Airport. There was definitely an edge to the lads. I could sense that. We knew where we were heading, taking on one of the top teams in Europe, one of the biggest rugby clubs in the world.

“If we didn’t front up, we were going to be in trouble. We couldn’t afford not to front up. Between ourselves we knew we could do a job. Toulouse didn’t see it coming.”

Joyce, who played seconds and thirds rugby with Garryowen as a winger and scrum-half spent six seasons working with Munster’s kit manager Jack Kiely before the opportunity to work in the role with Connacht came up.

Now living at Sixmilebridge, Joyce typically leaves home at 6.30am to make sure all the gear is in place for the Connacht players training sessions.

“It could be an hour-long or a 90-minute long session. That would be the morning. The following day could be weights in the morning and rugby in the afternoon.” Joyce arrived at Toulouse’s Stade Ernest Wallon at 12noon last Sunday, a full four hours before kick-off. What transpired that afternoon amounts to one of the most stunning results in European club rugby history.

Martin Joyce said: “When I got to the stadium I got everything set up, the drinks, the towels, the toiletries, the jerseys had to be laid out. The shields had to be picked up from the Toulouse boys and laid out on the pitch.

“The feeling at the full-time whistle was one of absolute euphoria.

“Back in the dressing room, the sing-song broke out, the camera phones came out, the craic, the laughing and the joking. It was just a really good, good feeling, one we have to get hungry for. We have had enough of the other stuff.

“I got loads of text messages of congratulations. To see all of them on the phone was overwhelming. Lots of the Munster lads had been on to us. Ian Keatley, who played with Connacht had texted us. Mick Kearney, Mervyn Murphy, Mike McCarthy.

“We got a text message from the Taoiseach too. Hopefully he will be flying the flag on Saturday at the Sportsground for the return game. Tickets for the game are hot property in Galway.”