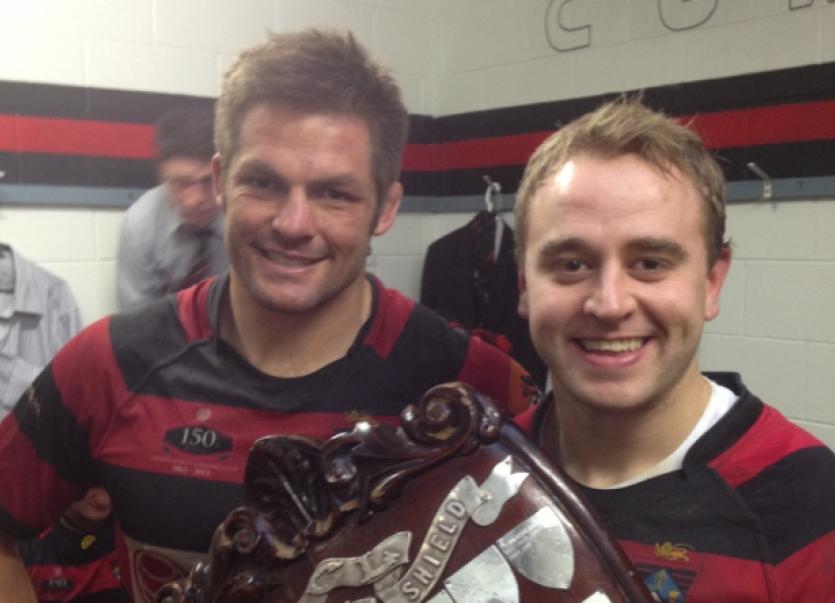 Former Garryowen AIL player Diarmuid McMahon - a past student of St Munchin’s college - featured in the most high profile rugby fixture played in New Zealand last weekend when he lined up alongside McCaw in McCaw’s comeback game.

McMahon and multiple World Player of the Year McCaw played for the Christchurch club side against University at Christchurch Park in the Canterbury Metro competition.

More than 2,000 spectators turned out to watch 32-year-old McCaw end his seven-month break from rugby. Former St Munchin’s College star McMahon and his All-Black team-mate celebrated a 22-5 victory over University.

Clareman McMahon has also played with St Senan’s RFC as well as featuring with Garryowen, both as a winger and full-back. McMahon has been in New Zealand for the past four years where he works as a teacher.

Former Garryowen head coach, Paul Cunningham, said McMahon had made a big impression during his time playing with the ‘light blues.’

Cunningham, who is head coach at Old Belvedere next season, said: “Diarmuid played U-20s and at senior level for Garryowen for a number of seasons.

“Macca is a fine player, a very talented footballer. He has good pace and is a very good distributor of the ball. He was strong and committed, a very versatile player, who could play on the wing, at full-back or in the centre. He also played for the Munster U-20s

“It’s great to see any Garryowen player continue to do well for themselves when they move away from the club.”

The Christchurch club side is made up with players from the ITM Cup and Super Rugby players not involved in match day squads for the Canterbury Crusaders.