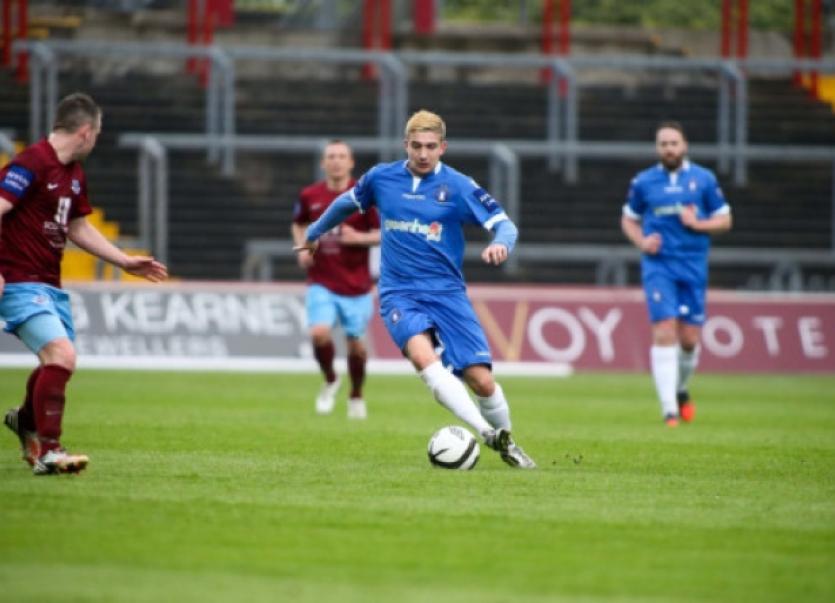 Limerick FC missed out on an excellent opportunity to cement their position in the upper reaches of the Premier Division of the Airtricity League when suffering a hugely frustrating 1-0 home defeat to Drogheda United at Thomond Park on Tuesday night.

Limerick FC missed out on an excellent opportunity to cement their position in the upper reaches of the Premier Division of the Airtricity League when suffering a hugely frustrating 1-0 home defeat to Drogheda United at Thomond Park on Tuesday night.

Drogheda United’s Paul O’Connor netted the game’s only goal in the 25th minute before an official attendance of 1,411 paying customers.

A bitterly disappointing night for Limerick was compounded in the 76th minute with their sending off of influential midfielder Joe Gamble after receiving a second yellow card.

If Limerick FC had hoped Drogheda United’s minds may not be fully on the fixture after the Co Louth side suffered a 7-1 drubbing at the hands of Shamrock Rovers in their Setanta Sports Cup final on Saturday, they were mistaken.

Drogs bossed long stages of the opening half against a strangely lethargic Lims side and to be fair, the home side could count themselves fortunate to trail by just a single goal at half-time.

The home side’s manager, Stuart Taylor – who had a spell playing with Drogheda – will have been disappointed with his side’s unconvincing first half display. Indeed, the fact the Man of the Match accolade was awarded to Blues ‘keeper Barry Ryan gives an indication of which side created the lions-share of the chances created over the 90minutes.

One would have Limerick to play with more energy and drive, having had eight days to recharge their batteries following a busy May Bank Holiday schedule.

On a cold, showery night at Thomond Park Limerick were boosted by the availability of striker Craig Curran. Curran sported a ‘Fernando Torres-like’ facial mask after sustaining a nasty injury in the Blues previous outing against Cork City.

Limerick FC could well have made the perfect start as early as the second minute when Axel Bossekota was played in behind the Drogs defence, but scuffed his effort which was easily saved.

A second Bossekota attempt was also shot well saved by Drogs keeper Michael Schlingermann after 17 mins before the visitors struck for the game’s opening goal.

By that stage, Limerick had already looked nervy in defence and a competent visiting side took full advantage of the home side’s hesitancy.

Drogs should have had a second after 38 minutes when, following a free kick from visiting left back Philip Hand, the in-rushing Alan Byrne was only denied by a brave dive from ‘keeper Ryan, while Shaun Kelly did equally well to block Cathal Brady’s close range effort as the ball spilled loose.

Both sides struggled to create much by way of clear cut chances in the second half, spoiled by driving rain and strong wind, but that won’t worry Drogheda who had done enough to claim all three points on offer.

The result sees Drogheda leapfrog Limerick into fifth place while Shamrock Rovers - who drew 0-0 with St Pat’s on Tuesday night - also go ahead of Limerick.

Limerick’s next game is against UCD this Friday night in Belfield.